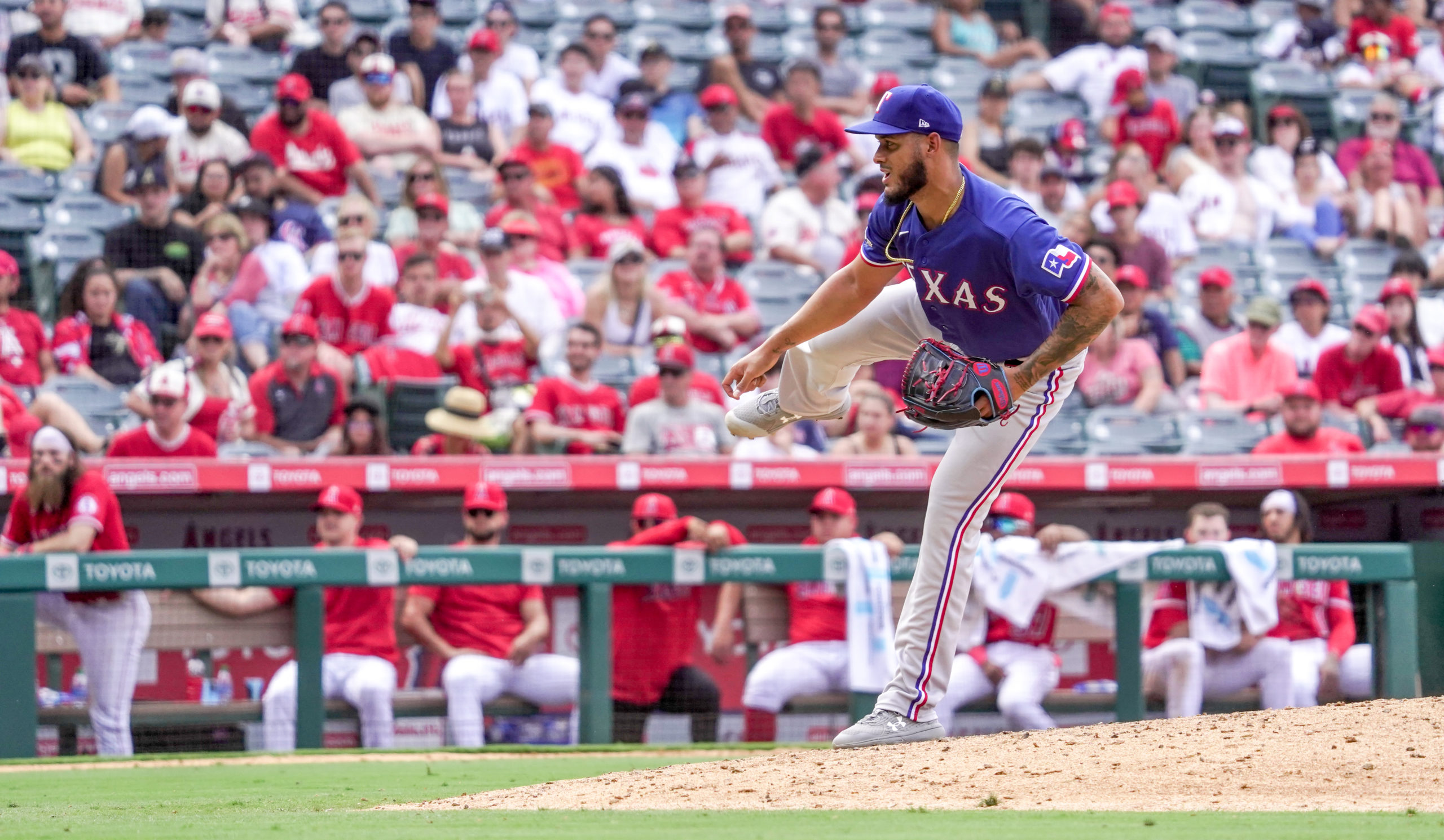 In early June, the wait was over. Jonathan Hernández went to Double-A Frisco for rehab following Tommy John surgery; two months later, he’s closing games for the Texas Rangers. Since he’s been back in the big leagues, Jonathan has pitched 8 innings (an inning in each relief appearance) and allowed 2 runs in one outing (the run allowed Wednesday vs. Houston was unearned). July 31st was his first time as an MLB closer. He saved two games in the Dominican Winter League but never picked up a save at any professional level. “It was pretty exciting when Woody told me that I was closing that first time in Anaheim,” Hernández said. “After never losing a game in my life, well, I did in Winter Ball back in 2019. I did it twice, [but] it’s not the same type of game that we play there and that we play here in the big leagues.” Jonathan picked up his second save last Thursday against the White Sox with his arsenal of pitches working masterfully.

Of course, you have the turbo sinker that most know about, ranging from 97 to 100 MPH. I asked Jonathan his favorite pitch, and he told me his sinker. “It’s awesome and well executed. You can see the reaction of people, so it’s pretty good. Before [the saves], I threw quite a few good sinkers, and people didn’t know how to react to it. It’s nice to see that, but [there’s] still work to do.”

According to Doug Mathis, the changeup has been better too. It has a different grip and shape, which helps Jonathan. One key for Jonathan is the development of the slider. “The stuff was good in 2020, but the slider is better and consistent,” Rangers co-pitching coach Doug Mathis said. “[He’s] getting consistent shapes with it. 2020 was good, but it was inconsistent with how he threw it.”

What makes the slider electric is not only the break and movement (a 90-91 slider with a sharp break is a nightmare for any hitter) but its complement to the sinker Hernández has. “Before, it was like they kind of check off the slider, but like I’m looking to try to get underneath the sinker. Now you have to try to get on that slider,” Rangers manager Chris Woodward said. “Get these out and around, swings, [and] all of this sudden, you’re now swinging at 99. You’re going to get hit with your arm. It’s nasty. [Therefore], it presents a whole new product [and] bigger range of options for Jonathan to get strikeouts.”

'I just wanna step up for my boys"

There’s one peak of curiosity I had. After his first save, Jonathan said he still hasn’t reached the 100% mark. I asked him about that, and it could be something fans are treated to next season. Hernández has constantly been throwing since October of last year in rehabbing. “It’s not feeling bad. I’ve been throwing since last year, and I haven’t stopped. It’s all about the workload that I have right now.” Heading into the offseason, Jonathan will get an opportunity to rest his arm for about a month and a half, and that’s where he feels like he’ll reach that full potential.

Doug Mathis pointed to another factor, his mentality. [Hernández] is an unbelieve kid, but his one thing is always wanting reassurance,” Mathis said. “Once he believes 100% in what he’s doing and what kind of stuff [Jonathan] has, he’s going to take off, and he’s already been good. His better days have yet to come.” The reassurance aspect can come from two things—one, coming back from injury, and two, being a young player. Jonathan is playing in his third season and is only twenty-six years old. “Getting back to that whole process of rehabbing for a year and a half is all your focus is on. Then when you get back into competition mode, it’s hard sometimes to flip that switch. He’s turned that on, healthy, and bouncing back,” Mathis said.

Jonathan Hernández told me about the rehab process and the difficulties faced with not trying too hard to get back, sticking to schedules, but not giving up on the process. The first two-three months started slow, then spiked up. “Then the moment when I [was] starting throwing came, I was so excited, but after I was throwing 75 feet [and] 90 feet, I was already tired,” Jonathan told me. There were days that it was mentally exhausting, and he thought about quitting, but there were also days that Hernández wanted to speed up the process. “It’s a process,” he said. “That’s what always helped me. It’s a process that takes time. Good thing I had my family, so they talk to me every day about it and have faith.”

Currently, the Rangers are utilizing Jonathan as the closer and sticking to it. “[Jonathan] has been able to control his heart rate emotions and execute pitches, [and elite stuff,” Woodward said. “So put those together, he kind of looked like he enjoyed being out there in the ninth inning.” After our discussion, I asked Jonathan Hernández how it feels being called “Closer of the Texas Rangers.” “I don’t know. I cannot say [it] sounds good or bad. It sounds weird at the same time because I had never heard that before. I gotta get used to it,” Hernández told me. I know a lot of Rangers fans are excited to hear that title.

Thanks God for the opportunity to be back after 15 months of rehab..Thanks to my family and friends that were there everyday pushing me on this long process, thanks to the medical staff that was there for me everyday! Thanks to my teammates for welcoming me back with open arms 🙏🏻 pic.twitter.com/QRULrBmKgT