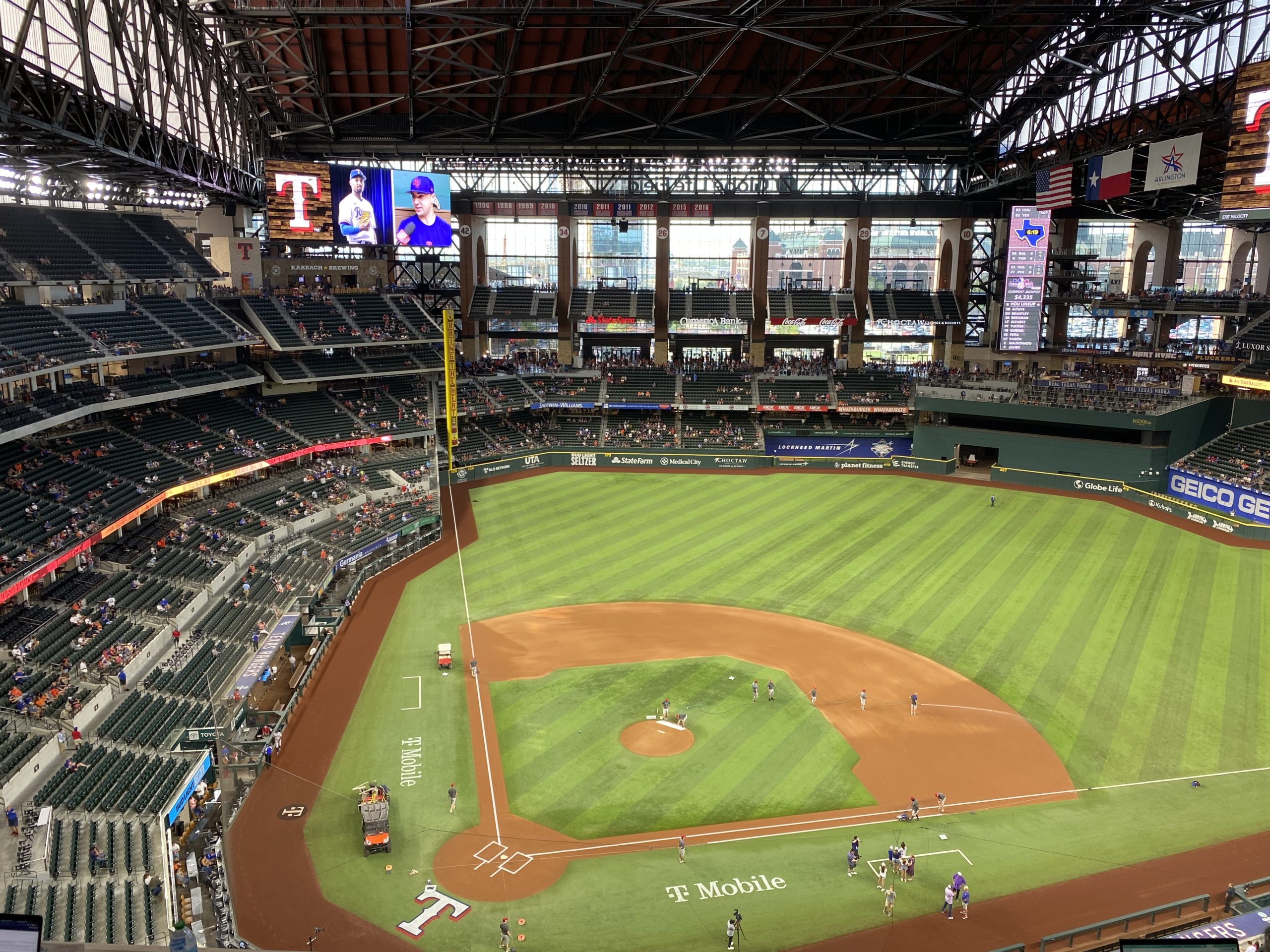 Entering June of 2022, there aren’t any active MLB players in the LGBTQ+ community. However, in early September of 2021, Bryan Ruby, who played for the Salem-Keizer Volcanoes in the Maverick Independent league, came out as gay. Later that month, pitching prospect Kieran Lovegrove came out as bi. Lovegrove was a third-round draftee of the Cleveland Guardians in 2012 and spent nine seasons in the minor leagues among the Guardians, Orioles, Giants, and Angels organizations.

So is baseball ready for an active LGBTQ+ player? Considering multiple internal and external factors, that’s a bit of a loaded question. As an individual, you can’t predict how the perception will be. “I don’t see why not,” Taylor Hearn responded when I asked if a player came out if he would be accepted among his teammates. “I got gay family members, and I got no problem with them.”

Another Ranger I asked was Charlie Culberson, who has been in the league for ten years, how the perception would be. Would it be a big deal if a player came out, and would it create riffs? “I sure hope not. Everyone, everywhere, [and] everybody does things differently. If you look at somebody and say, “if that’s right or wrong” just from one decision somebody makes or how somebody feels, [then] that’s me like throwing a stone at somebody when I’m sinning every day.”

Culberson’s input doesn’t rest among the individual coming out, but the teammates around and those that judge that individual. “If we’re looking down on somebody from any type of decision they make, [then] that’s on me. If I’m taking care of myself, then I shouldn’t be worrying about what other people are doing. I should accept whoever for whatever, however, they believe, and whatever decision they make, especially when you’re on a team.”

For the first time in MLB history, the Dodgers & Giants wore Pride caps in the same game in support of the LGBTQ+ community. Dodgers SVP of Marketing, Communications & Broadcasting Erik Braverman & Giants VP of External Affairs Roscoe Mapps traded Pride caps prior to the game. pic.twitter.com/iPjt0EsI6R

Clubhouse Changes Through the Years

For retirees of sports who came out after retirement, they tell stories about how volatile locker room and clubhouse settings were (not all, but some). However, there’s a development in environmental changes to where players can be themselves more and be who they are compared to even ten years ago. “I think everybody should be allowed to be themselves in today’s environment in a game that is a lot more diverse,” Chris Woodward said. “When I came up, we always had Latin players, I played with a few guys from Japan or Korea, but I think a broad spectrum of people today embracing everybody for who they are,” Woodward said. Woody recalls the norm in the past, and anyone different from that normalization kept to themselves. “We’re a lot more understanding [and] just let people be themselves.”

For Culberson, when he came up with the Giants organization, he talked about getting used to playing with international players and how they went about their business, lifestyles, and day-to-day activities. “You put everything in one pot,” Culberson said. “It’s up to you to make those decisions on how you interact with people. I think things have gotten easier lately because of the topics that have come up, and I think people are getting more comfortable with any type of decisions that are made.”

For younger players like John King or Taylor Hearn, they’ve noticed everyone in the clubhouse accepting of whatever background the player is from. “That’s how it should be,” King said. “Everyone is different; everyone is unique in their own way. All you can control is you loving everyone else regardless. People have understood that a lot better, it seems the past few years. No matter what, even if you don’t agree with it, show your brothers some love.” For Hearn, he says everyone accepts everybody regardless of their background.

While the situation in Tampa early in June indicated baseball may not be as open, I took a different approach to it. Sometimes, you have to sit and think about things from others’ perspectives. Throughout time, disagreements happened, and the more I stopped and reflected, the more I understood the overall why (the actions, not the words). That’s not saying I feel good about it. In fact I dislike it, but I understood why the Rays’ bullpen players did what they did.

For the five bullpen players that refused to wear pride sleeves and caps, should they put something on that they don’t believe in? Would you wear something on your body that reflects what you don’t see as being right and should teams force that upon players? Again, I’m setting all the pieces down and evaluating it from both sides. As a gay man, I hope that I don’t have to do this, and everyone accepts everybody, but that world doesn’t exist. Yes, Jason Adam’s comments didn’t sit well with me, but again, they are based on his viewpoint of the world and his faith which is not reflecting to others’ which comes across close-minded. Do I think Adam’s portion of still welcoming despite his beliefs is genuine? Only Jason Adam can answer that truthfully. The rest is speculation. Do I hate him and the others that didn’t participate? No, but my wish is others took the same approach and think of the other viewpoint and how much it would mean to the fan base if the entire team participated. I also want to give props to Kevin Kiermaier and his comments too.

Pitcher Jason Adam should read the New Testament. This is what Jesus said about homosexuality: “ “.

Jesus is about love, not about hating people who are different from you. https://t.co/4EQ7jWaopG

The team is rightly getting roasted for how they handled this but shout out kevin kiermaier for his statement positively associating pride night at the park as a family-friendly event. because queerness isn't dangerous, it's subversive. The right equates those things on purpose https://t.co/Xj8x7aTGAA pic.twitter.com/AtlZQ3sTW2

On the positive side, look at the amount of support Carl Nassib had last season for the Las Vegas Raiders and Luke Prokop’s support with the Edmonton Oil Kings (Western Hockey League team). Other coming out stories, Major League Baseball is more than ready to see an out player in the Majors or Minor leagues. Culberson says it best, “That stuff shouldn’t matter. You accept people for who they are.”