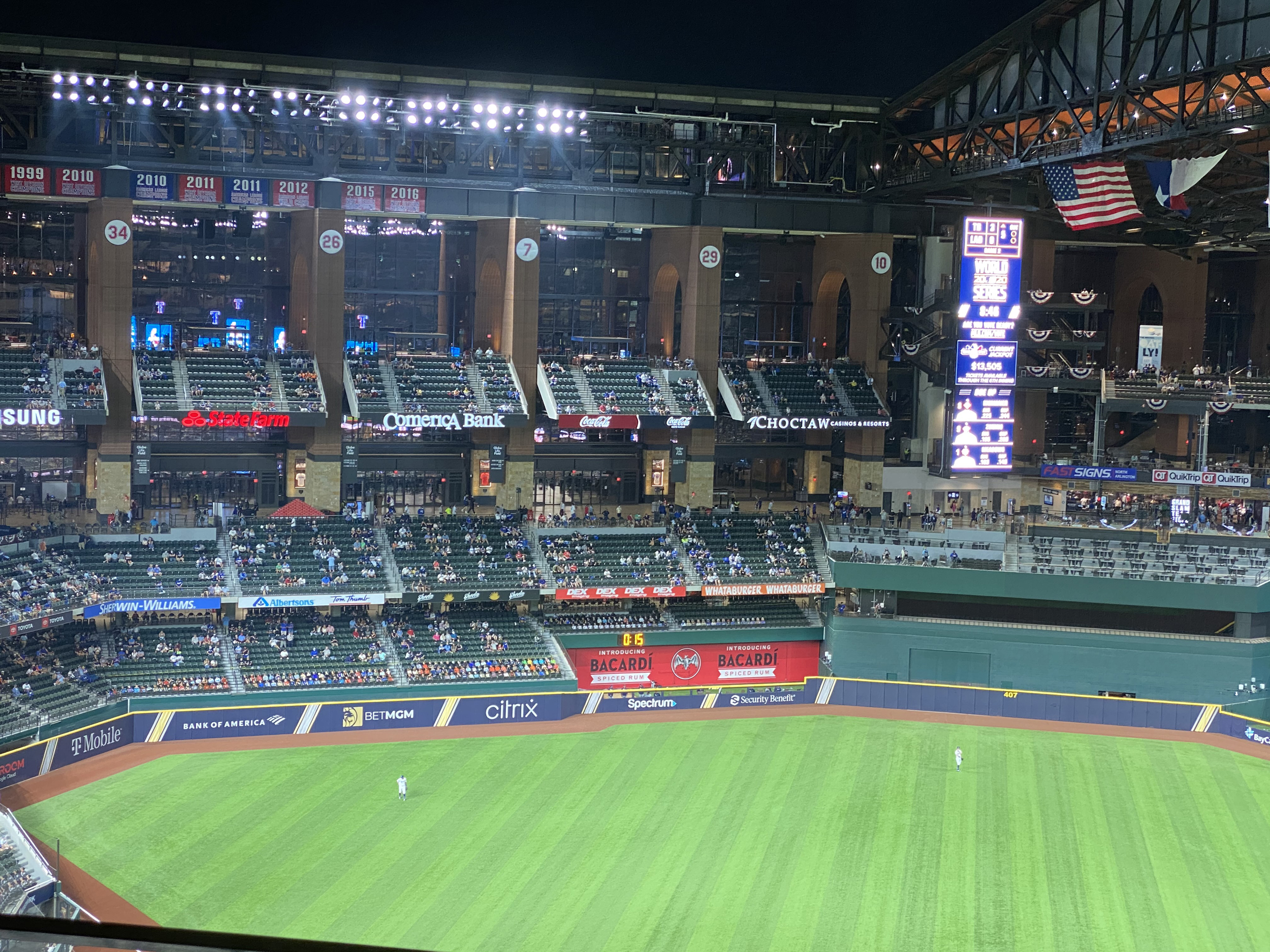 How did the Rangers’ Globe Life Field handle hosting the 2020 Postseason?

How did the Rangers’ Globe Life Field handle hosting the 2020 Postseason?

When news broke out that the NLCS and World Series would have fans, curiosity struck. Specific NFL stadiums had allowed a small number of fans at that time (Jacksonville and Kansas City in Week 1). It got me thinking of how the stadium would operate and its perception when at just 25% of its capacity. Fans got their first look at Globe Life Field, and the Rangers didn’t take the field.

Honestly, there were several Rangers fans in attendance during the thirteen fan-allowed postseason games. The vast majority of the population were Dodgers’ fans, but I noticed jerseys and hats from several MLB teams.

“It was a shame that the first playoff and World Series games in a new stadium did not feature the home team,” Rangers season ticket holder Keith Dunlap told me. “But, 2020 has been full of firsts.” It was satisfying to see and hear normal-timed crowd reactions, including booing, team chants, and undivided cheers. It’s no knock on Grubes and the crew because you have to react to how fans respond, which is impossible to time exactly.

How did Globe Life Field personnel handle the pandemic situations? “I heard workers reminding those around me to wear their masks unless eating or drinking. I also appreciated the hand sanitizer and handwashing stations,” Keith said. Ballpark employees zip-tied unavailable seats to help keep social distancing in order, and workers were vigilant in making sure fans kept their masks on. In World Series Game 4, I would estimate about 90-95% of fans wore masks correctly. Despite a lower population in the other games, it still was a vast majority of fans complying with regulations. Fans did a tremendous job.

The crowd noise will be the most intriguing thing that comes in 2021. In an assumption of normality, it’s curious how loud the ballpark will get. Dodgers’ fans made their voices known, and the noise level felt similar to a near packed out park. For those wondering, it felt that way regardless of the roof was closed or open. It’s the number one consensus between everyone I asked. The ballpark gives a sense of closeness compared to the old park, which could contribute to the reason.

Ummmm I think that’s the ONLY way you end this wild #WorldSeries Gsme 4. Series even at 2. pic.twitter.com/86hAQhXHF3

What should fans expect entering Globe Life Field for the first time? Well, the roof gets the most prominent reputation, but I think the artwork that’s viewable throughout the concourse is delightful. In Keith’s case, he liked the video boards, “The two jumbotrons are a sight to see and make you can see one or both depending [on] where you sit. Everyone would hold their breath when a pop fly would go up in right field in anticipation of if it would touch the screen. The field is beautiful but seems more separated from the fans.”

I will say this for Rangers’ fans; take some time to grasp the new park, I’m certain you’ll enjoy it. Most Rangers’ fans associate the team with Globe Life Park, but I think in a few years, fans will welcome this place. “It is a more beautiful stadium in person and during a game than on TV, tour, or what I imagined,” Keith said. I agree; ballparks on TV do not do the experience justice. Fans don’t get to digest the park’s atmosphere on a television screen; fans will like this place. For the postseason, the Rangers’ personnel did a fantastic job. Hopefully, this got MLB’s attention for an All-Star hosting opportunity.

Normally with #Dodgers home games this postseason, @TEXPAMAN will say the famous line, “it’s Time for Dodger baseball!” Tonight he turns it to the Jumbotron for the man @TheVinScully to day those words. #WorldSeries