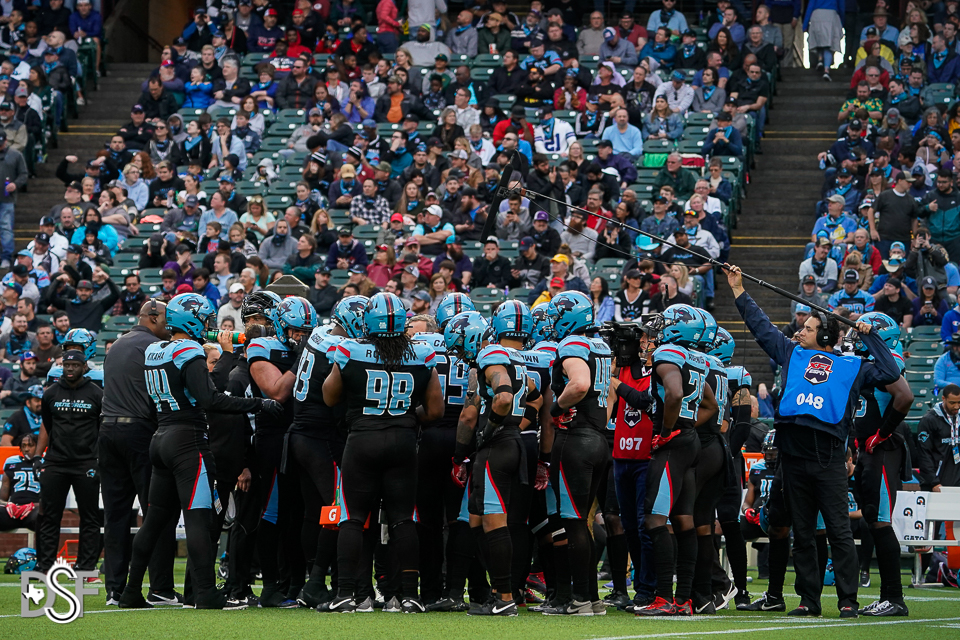 How did the Renegades do in week one of hosting an XFL game at Globe Life Park?

How did the Renegades do in week one of hosting an XFL game at Globe Life Park?

After the inaugural week of the new-and-improved XFL officially launched on Saturday with games in Washington D.C. and Houston, it was time for North Texas to get its shot to show if they were ready for some more football just one week after the conclusion of the NFL season.

If you’re just someone on the internet each week, you can kind of get a feel for the several sectors when it comes to how people are feeling about the XFL before even watching a second of it: 1. Flippantly disinterested/skeptical and there’s nothing anyone could do to get them to budge. 2. Mostly indifferent, but willing to give it a couple minutes on TV every now and then these first few weeks. 3. Overly excited people who have already bought season tickets and team apparel.

While the league’s first two games were going on Saturday afternoon, there was plenty of the reaction from all three categories across Twitter. Just from a slightly non-biased point of view like mine, it mostly seemed positive. Maybe even swaying some people from category one over to category two or three.

So if you were somewhat interested in attending Sunday’s home opener for the Renegades but just weren’t quite ready to pull the trigger on tickets, I am here to break down the scene in Arlington on Sunday afternoon.

Pregame scene
Rolling up to the Globe Life Park on a early February day is certainly an interesting feeling, but it was notable right away that there was a buzz building up in the parking lots surrounding the stadium as early as 2 PM. As I reached the third base gate while driving on Ballpark Way, I saw some tailgating going on and some blue and black Renegades jerseys. There was a line to get into a parking lot close to the stadium. Again, this is two hours before kickoff and thirty minutes prior to the gates opening. 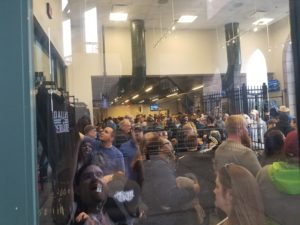 Inside the fan shop behind the home plate entrance at about 2:45 on Sunday afternoon.

There were plenty of fans waiting to get into the stadium right as the gates opened at 2:30. Once inside, I was a bit surprised to see the fan shops both by the home plate gate and out in center field absolutely swarmed with people and even with long lines outside of them. There are people ready to get their hands on some Renegades merchandise!

Globe Life Park set up
As a lifelong Rangers fan who has grown up going to tons of games at Globe Life Park through the years, it was somewhat difficult to see my childhood baseball home altered in such a crazy way to accommodate a football game.  Some of the alterations were interesting and made sense, but a few were a bit unstable. 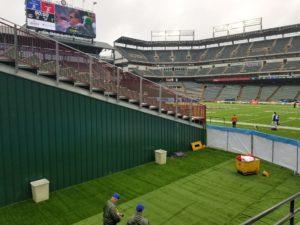 While no one was sitting in the seats that offered the view in this picture, they were seats available as only the next section over way taped off like a crime scene. This was something I noticed in the initial renderings of the stadium re-design and it turned out to be just as awkward as I thought. 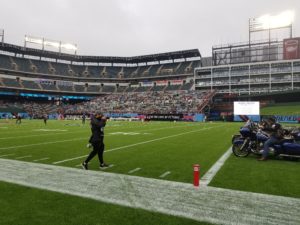 The massive aluminum platform of seats on the west sideline (what used to be left/left-center field) certainly seemed pretty goofy when the renderings were released, but they are actually some quality seats to get considering their view. There are actual seats with backs that were completely new and not just recycled seats from the demolished stands from the baseball left field seats. The way of getting to these seats is interesting as a platform leads out from the old back wall at the top of the left field seats and out to the new “Mount McMahon” (my play on Mount Davis in Oakland). 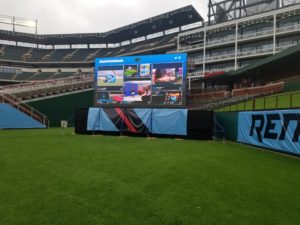 One final nice touch was the addition of this videoboard right at the base of the wall in what is basically straightaway center field.  There was only one major scoreboard in the park and it is located on the roof of the home run porch in right field (behind the south end zone). This prevents any of the people sitting behind the end zone from being able to see the giant scoreboard, so it was a nice move by the Renegades to add this smaller, temporary scoreboard for those sitting in those sections. The lack of video board for those sitting in those sections was always one of the flaws of the baseball set up at Globe Life Park as well.

In-game atmosphere
With only the lower level and the first level of suites open to fans in a stadium that held 48,000 when operating as a fully open baseball stadium, it was going to seem weird and empty no matter what the attendance was for this game. All things considered, the vibe and atmosphere was pretty strong from the reported 17K in attendance on Sunday afternoon.  There were tons of moments where people were standing and cheering loudly on third downs. The players noticed this as well.

“It was a great football environment,” running back Lance Dunbar said after the game. “The fans came out and supported us… I wasn’t surprised. It’s Texas — everyone loves football here.”

The Renegades did a good job with their in-game presentation and there was plenty of prompting the crowd to make noise. When I was down on the field throughout the pregame ceremonies and the first quarter, there was a definite palpable buzz.  The players were feeding off of the energy and pumping up the crowd for more. While 17K doesn’t sound like a huge number for an attendance figure at a football game, it really isn’t, it’s a respectable starting point for the XFL’s first weekend. It seemed like maybe a couple more thousand could fit into the scattered empty seats that were available to the public, but not a lot.

The Renegades on the field didn’t really hold up their end of the bargain with putting on a major show. They failed to score a touchdown in their first game and that lack of action affected the amount of people willing to stick it out until the end. There were A LOT more empty seats in the final few minutes of the game than there were at the start of the game. Hopefully their offense is able to pick things up the next few weeks.

All things considered, it was a fun first day of the XFL in North Texas. While there are certainly some interesting and iffy parts of the stadium set-up and game play, it’s still an experience that should be a must for any local football fan that often finds themselves priced out of a Cowboys game and doesn’t feel motivated to pick a random high school or college game around town.

I know I’ll eventually bring my three-year-old son out to a game to give him a taste of professional football in person. He is a baseball lover at heart, so it will be hard for him to see his beloved Globe Life Park altered in such a way.

My baseball-loving three year old, who jumps for joy at the site of the exterior of Globe Life Park whenever we exit I-30, wasn't happy when I showed them what they did to the Ballpark:

The Renegades next play at home on Sunday, March 1st at 3 PM against the Houston Roughnecks. Get your tickets here and check out their schedule for the next few weeks as well.