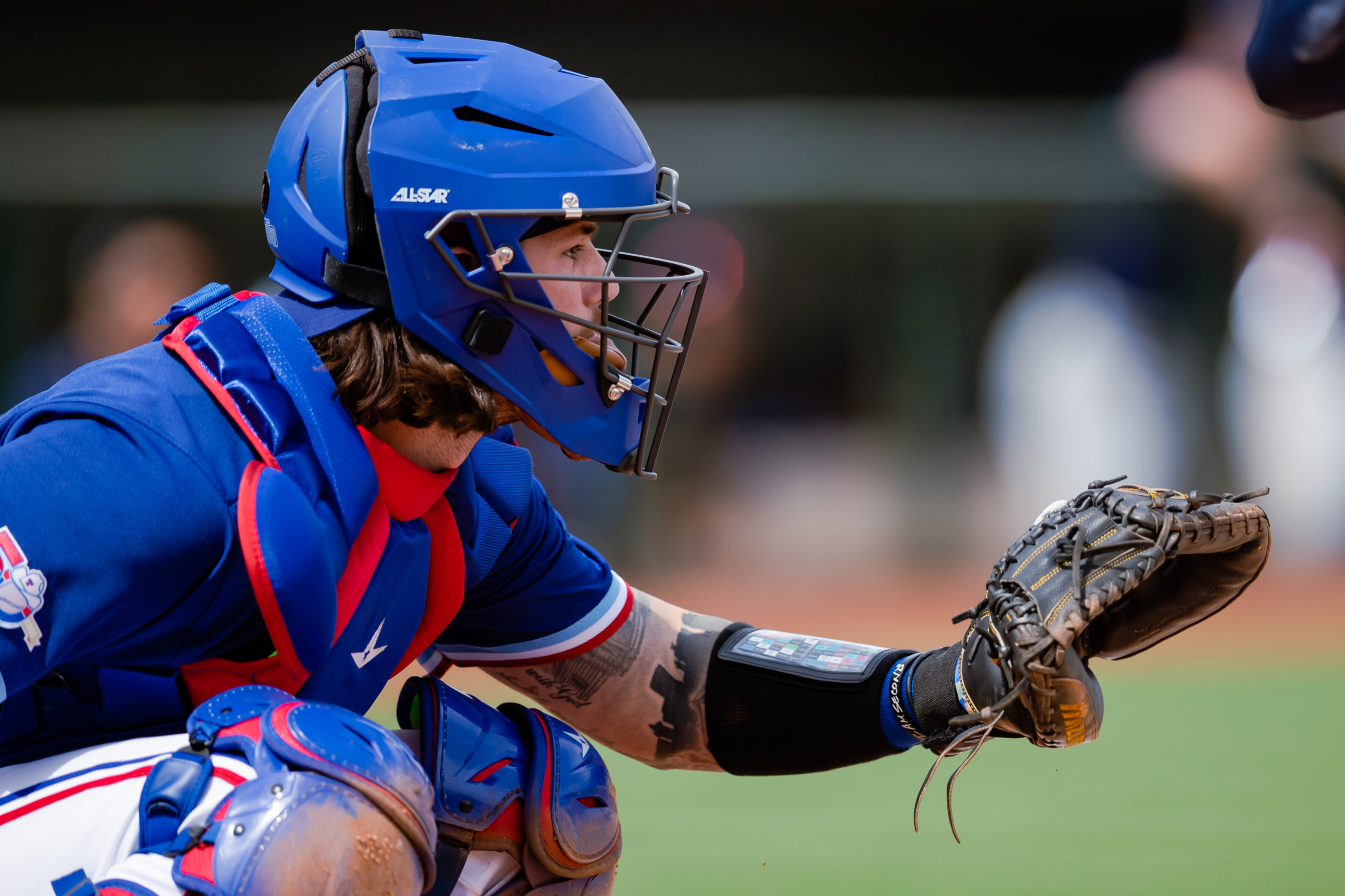 “I believe he’s an All-Star. I believe he’s one of the best catchers in the big leagues.” Those were words spoken by Rangers-catching coordinator Bobby Wilson and words he reiterated with me multiple times. Jonah Heim is flourishing in the primary catcher role, a role surfacing three months ago after Texas traded Jose Trevino to the Yankees.

“I had a good offseason getting my body in shape, getting stronger, and trying to clean up my swing a little bit,” Jonah Heim told me about the differences between 2021 and 2022. “Going into Spring, [I] made a couple of adjustments with Donnie [Ecker] and Tim [Hyers] that provided me with some freedom in my swing.” The key for Heim is consistency and trust within himself and his swing.

Heim bolted out of the gates in April, finishing with an OPS over 1.000 and an OBP of .444. Sure the numbers have trimmed down since a fast start, but Jonah is going toe-to-toe with production among American League catchers. He ranks third among AL catchers with sixty or more games played with a .766 OPS, second among all AL catchers in home runs (9), and fourth in runs scored. Like last season, Heim is second-best in baseball in framing (next to former Ranger Jose Trevino). Heim and Trevino have five catcher framing runs, converting strikes to saved runs. Yes, you could say that the Rangers saved five runs because of Jonah Heim behind the plate.

For Bobby Wilson, it’s more than the offensive side of what’s changed for Heim. “He knows that it takes to get through a full season at the elite level,” Wilson said. “He knows the pitchers better, he’s tougher with the system, so there’s a lot of stuff that plays into what he’s capable of doing.” While the outside baseball world still is unsure who Heim is, and Rangers fans may be surprised by the success, Bobby Wilson isn’t. “This is what I expected of [Jonah]; this is the player what when we acquired him we thought he was going to be.” Rangers manager Chris Woodward noticed the difference in Jonah Heim and how much of a complete player he is becoming. “He checks a lot of boxes and now he’s learning how to play everyday and how to manage his body,” Woodward said. “The switch hitter, the bat to ball, the power we felt we could tap into. [Jonah has] the strong arm, good receiving, he’s coachable, and a leader. He’s flourished in that way in leading those pitchers. You see how well we’re pitching they trust him.”

With Mitch Garver unable to catch, likely for the rest of the season, Jonah Heim is the main guy behind the plate. Does that confidence carry over to the offensive side, the game-calling side, and the defensive side? “Absolutely,” Heim said. “Knowing that I’m going to be in there every day, it’s nice to keep my mind right, and [if] something goes bad the night before, you’re not thinking about it too much. You’re right back in there. It’s nice to keep that fresh shirt every day and knowing you’re going to be in there. It helps a lot.” Bobby Wilson told me from a pitch-calling side that it helps to be in the lineup daily working with the pitchers too. “You’re seeing the hitters every day, making adjustments with the other guys. [They] know you’re going through it every day, so it’s easier to push the game planning and putting messages across,” Bobby said.

Jonah Heim making sure All Star voters didn't forget about him pic.twitter.com/BQc1kuLdhg

Jonah also is learning from Mitch Garver. While Garver hasn’t had the chance to catch in nearly two months, Heim told me what he’s learned from Mitch. “[Garver] is very smart working with pitchers and knowing their shapes and how to get guys out. He does a great job with game planning stuff, and [his] scouting reports are top-notch. He’s taught me tremendously.”

All-Star voting is going on, so would that mean for Jonah Heim to be on the big stage in Los Angeles in his first year as the primary catcher? “It’d be everything,” Heim chuckled to me. “It’s a tremendous honor, and something I didn’t think would be a possibility to start the year. If it happens, it happens [and] that’s awesome.” However, in typical Heim fashion, he shifted to a more team-oriented goal, “We’re worried about helping this team win and get some Ws.”

“He has a chance,” Martín Pérez said when asked about a case for Jonah Heim and the All-Star game. “He’s been good and been good at calling games when he’s behind home plate. One thing that I like is he always goes out there and competes no matter what.” “He’s taken all of the criticism and all of the advice from day one over the last couple of years and how to manage himself in the weight room, the recovery aspect,” Woodward said. “This guy is invested [and] he wants to be great.”

“How’d he get there?” Bobby Wilson said regarding Heim in position for the All-Star game and the success he’d had. “Through his own work, understanding what we’re trying to do, and taking it on and taking ownership and accountability for everything he does.” So, Rangers fans, be sure to vote Jonah Heim to the All-Star game. Voting ends June 30th.