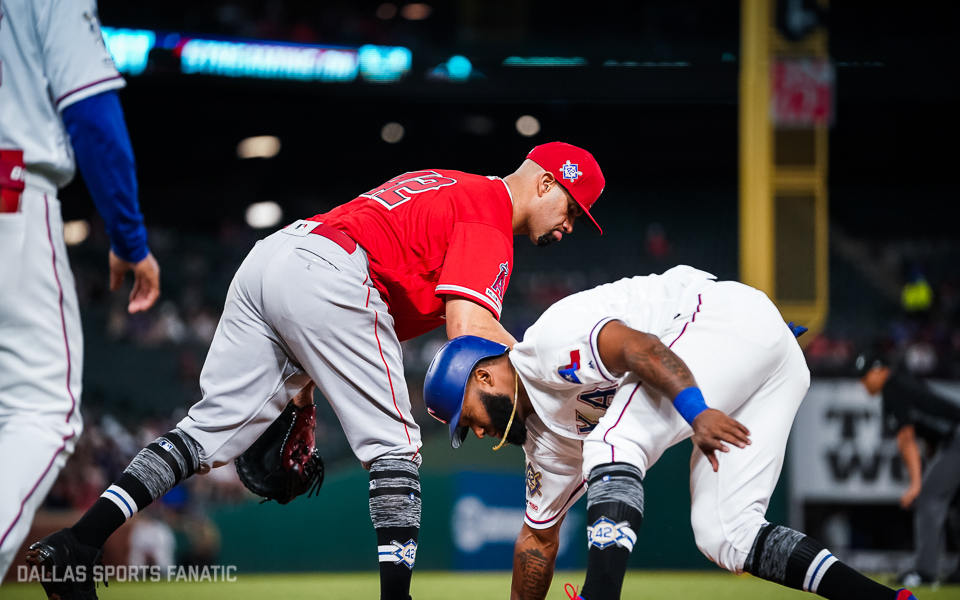 How will Rangers fare in the AL West during the revised version of the 2020 season?

How will Rangers fare in the AL West during the revised version of the 2020 season?

It will be almost fourth months late – but as we learned Tuesday, there will be an Opening Day for the Texas Rangers in 2020.

Many things will look drastically different than we’ve seen in years past. Players will have to follow strict social distancing and health guidelines, as detailed in a 100-plus page document mandated by MLB.  The Rangers’ schedule is no exception.

According to USA Today’s Bob Nightengale, the 60-game Frankenstein that will see Texas play 10 games against each divisional opponent. Normally, each team plays a whopping 19 head-to-head games against each of four teams in the division.

Even with all the changes, one element of the restart rumored closely with a progressive change was the possible expansion of the current five-team playoff structure. At least according to initial reports, that won’t be happening.

It’s business as usual, then- Texas will be sparring head-to-head with its interstate rival Houston and three Pacific coast foes for coveted playoff spots. Here’s a look at how each team stacks up ahead of “Summer Training.”

Seattle has truly entered a rebuilding phase after surging to a 13-2 start last April and competing for a Wild Card spot in 2018, but ultimately missed the playoffs both years. The Mariners have one of the longest playoff droughts in professional sports, having missed the postseason each of the last 19 seasons. Expect the same for 2020- it will also be strange seeing a Seattle squad not led by Felix Hernandez, who signed with Atlanta in the offseason.

Baseball Reference might be extremely low on the prospects of the 2020 Rangers in its simulation, but I’m not. In our pre-COVID preview article in March, I picked Texas to go 82-80, narrowly missing the playoffs. I stand by that pick, adjusted for the shortened season.

I think the Rangers were one of the teams most negatively impacted by the fact that the playoffs won’t be expanding. If the league would’ve stuck with the seven-team model, Texas would’ve made the postseason last year. With an improved offense and stronger starting rotation, I think they would’ve almost surely made the playoff field.

The outfield is extremely different. Gone are Mazara, Deshields and Pence, and in are Solak, Gallo and Choo. Mazara showed signs of offensive strength last year, but Texas is convinced he’s reached his ceiling. I’m glad to see the team move on from Deshields and Pence, even though they’re both fan favorites. The main question for Texas is in the field- can Gallo and Solak adjust to justify playing them away from their natural positions?

If Mike Minor and Lance Lynn can tap into any of the form that produced two top-ten finises in AL Cy Young Award voting last year, Texas’ rotation is the most underrated in baseball. Jordan Lyles was All-Star caliber after a July trade to Milwaukee. I’ve always been a fan of Kyle Gibson, who is coming off a solid season in Minnesota. If it all fits together, Texas will improve, and contend for a second Wild Card spot.

If everything holds to form, the Angels will be a top-five offensive team in baseball. The question- as has been the case nearly every seson the team has boasted the best player in baseball;. Mike Trout- is with pitching. Rendon was the most coveted bat on the free agent market, and, like has happened several times in the past decade, the Angels outbid the Rangers’ most coveted target.

Los Angeles took a chance on former All-Star Julio Teheran along with Baltimore top prospect Dylan Bundy to shore up a patchwork rotation that could be better in 2020, but there are still plenty of holes. Andrew Heaney’s ability to stay healthy or not will have a significant impact on the team’s ability to contend with Tampa Bay and Boston for the second Wild Card spot.

Oakland has very quietly been Houston’s lone competition in the AL West for the past two seasons. It’s made each of the last two AL Wild Card Games, even hosting last year’s loss to Tampa Bay.

Offensively, Matt Chapman and Matt Olson have emerged as elite offensive threat along with above-average defense, and Marcus Semien put together perhaps the most underlooked 3rd-place finish inAL MVP voting seasons ever. Even if the A’s did nothing to improve the offense, it’s not a question mark.

The only real area of concern is the pitching staff, specifically, the bullpen. After Treinen and Jharel Cotton’s departure, Oakland will be heavily relying on former Ranger Jake Diekman to anchor the staff. Young arms Sean Manea, Frankie Montas, AJ Puk and Jesus Lazardo along with Chris Bassitt make up a rotation with elite potential as a ceiling- but are they ready to surpass Houston?

Perhaps no team benefits more from the absence of fans at MLB games than the Houston Astros and the reign of boos they would’ve received as a result of the team’s infamous 2017 cheating scandal.

After perhaps the most tumultuous off-the-field offseasons for a single team in MLB history, the Astros’ biggest true challenge is themselves- and whether or not they will be distracted from all the outside noise.

Despite losing AL Cy Young Award runner-up Gerrit Cole to the rival Yankees and one of baseball’s most lucrative contracts ever, the Astros didn’t really need to improve a lot. Young stars like Kyle Tucker and Yordan Alvarez emerged as true offensive weapons to pair with 2017 AL MVP Jose Altuve, 2020 MVP runner-up Alex Bregman, and free agent-to-be George Springer aren’t bad options to pair with Justin Verlander and Zack Greinke, who return to anchor the rotation.

The Astros are still contenders whether we like it or not, and it will be interesting to see how a previously-distracted baseball world responds after their infamous cover-up.