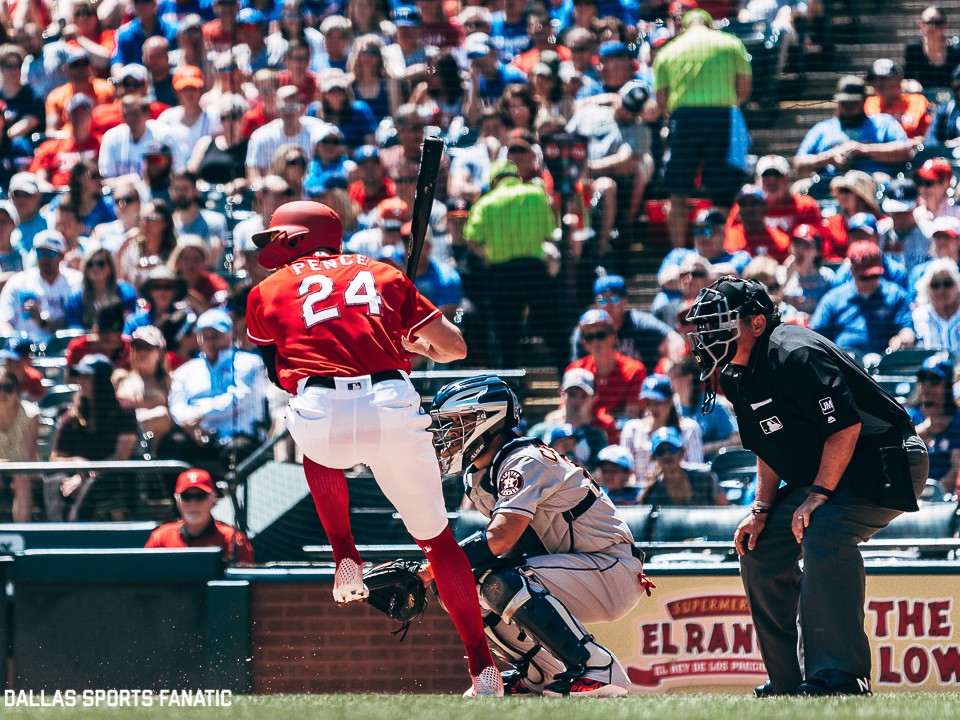 There is a spark to this 2019 Texas Rangers team through the first third of the season that can be traced to one player: Hunter Pence.  It’s well documented how Pence grew up in Tarrant County and attended Arlington High School and the University of Texas at Arlington.  The man has had a great major league career over the past dozen years.  Three-time All-Star, two-time World Series champion with the San Francisco Giants.  He got a $90 million contract to play in the Bay Area.  He has a lovely wife with a successful YouTube channel.  The man seems to have it all.

All major league careers have ups-and-downs, though.  After a seven-year stretch of averaging about 159 games per season from 2008-2014, injuries and a declining performance plagued Pence in his last four seasons in San Francisco as he averaged just 97 games played per year from 2015-2018.  So as he entered free agency last winter coming off an age 35 season where he had a batting average of just .226 and an OPS below .600, there wasn’t a ton of hope in the stingier free agency waters of Major League Baseball these days for Pence to find a way to continue his career.

It was a big storyline last fall that a veteran/player of Pence’s status would go to the Dominican Winter League to improve his game, but he seemed to think he had to in order to extend his career.  While he only appeared in eight games, the experience was a valuable one and was surely an influencer for Jon Daniels and the Rangers to ink Pence to a minor-league deal later in the offseason.

Hunter Pence gets 2M base plus 1.25M incentives on deal with hometown rangers

The move came a week before Spring Training was underway, so it was far from a sure-thing that Pence would be on the Opening Day roster. He battled, performed well and left first-year manager Chris Woodward with no choice but to include him.  He has not disappointed.  Through the month of May, Pence is hitting .301 with 11 home runs, 39 RBI and has an OPS of .966.  The 36-year-old has become a vital part of the middle of the lineup for a team that is still in a playoff-position in what is supposed to be a rebuilding year.

An All-Star candidate for Texas? Seemingly so.  A candidate to be traded to a true contender before the July 31st trade deadline? As a veteran on a one-year deal, likely so.  Either way, Pence’s first few months in Texas have been incredible.  It was a low-risk/high-reward type move for Rangers GM Jon Daniels and frankly, it’s the type of move he’s hit the jackpot on several times before.

Sammy Sosa in 2007
2006: 0 games
2007: 114 games, .252 BA/.311 OBP/.468 SLG, 21 HR, 92 RBI
Starting with the weakest example is always a good strategy, right?  Sosa’s final season in baseball was spent in Arlington back in 2007.  Among all the steroid rumors and the corked bat incident, the seemingly sure-fire HOFer had worked his way out of a Cubs uniform and into an Orioles one for the 2005 season.  An uninspiring season in Baltimore paired with all the noise surrounding him led to Sosa being unsigned throughout the entire 2006 MLB season.  Finally, the Rangers agreed to bring him into Spring Training in 2007 on a minor league deal that would net him a modest $2.5 million if he made the Major League roster.

While Sosa was far from an on-base machine in 2007 with Texas, just a .311 on-base percentage, the Sammy hop was still a regular thing as he had 21 home runs in just 114 games that season.  The most memorable of his big flies was his 600th career homer coming on a warm summer night in Arlington.  Of course, since baseball is relentlessly romantic, it came against the Chicago Cubs.

His one year in Texas turned out to be a career year as it garnered his first (and only) All-Star appearance and even saw him earn a few MVP votes.  While the Rangers opted not to bring him back for the 2009 season, it was still a memorable summer for this on-base machine in a loaded lineup with Josh Hamilton, Michael Young and Ian Kinsler amongst others.  A small wager by Jon Daniels for big-time production.

Vladimir Guerrero in 2010
2009: 100 games, 15 HR, 50 RBI, .794 OPS
2010: 152 games, 29 HR, 115 RBI, All-Star, Silver Slugger, .841 OPS
A long-time division rival came to Texas in 2010 and became one of the key pieces in the team’s first playoff appearance in over a decade and eventually their first trip to the World Series in franchise history.  Guerrero routinely destroyed the Rangers 19 times a year as a member of the Los Angeles Angels in the 2000’s.  The 2004 American League MVP hit .395 in 108 career games against Texas and the 162 career hits he had against forgettable Rangers pitching were more than he had against any other team in baseball.

Naturally, whenever Vlad was available after a disappointing and injury-riddled 2009 season with the Angels, Daniels knew it would probably be better to have the future Hall-of-Famer on his side.  With just a one-year, $5.5 million dollar deal, the Rangers were able to land a cleanup hitter for 2010 that would be an All-Star that season.

Guerrero was certainly going to Cooperstown even without his year in Texas on his resume, but it sure helped boost his list of accolades with his first ever appearance in the World Series.  Texas definitely could not have been there without the contributions of Vlad.

A role/signing like this hasn’t been as common as of late for Texas.  Lance Berkman’s disastrous 2013 season might be one of the main reasons for that. Shin-Soo Choo’s mega-contract taking up so much of the payroll with him being primarily a DH is also a big influencer on the lack of a move like this as Pence and the other players got most of their at-bats at DH. Jon Daniels confidently took a chance on Hunter Pence ahead of this season, and Pence has made his gamble worth while through the first two months.