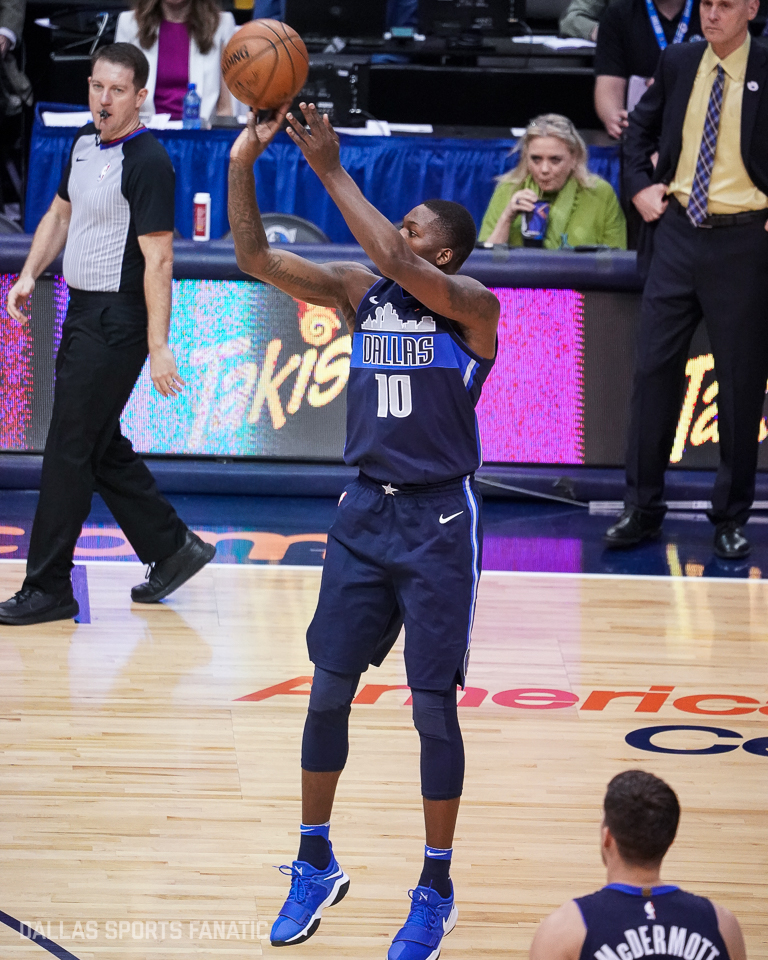 The Dallas Mavericks have a history of turning unknown, fringe rotation players into serviceable contributors off the bench. Seth Curry, Doug McDermott, and Yogi Ferrell come to mind as recent guys the player development team in Dallas has helped to re-invigorate their careers or make a name for themselves. In the past, Dallas has been able to get the most out of obscure players such as Brandon Bass, Ian Mahinmi, and my favorite “Forgotten Maverick” and NBA Champion DeShawn Stevenson. Now it is Dorian Finney-Smith’s turn.

In 2016, Dorian Finney-Smith went undrafted out of Florida and was invited to play on the Mavericks summer league team. After impressive defensive performances and a promising shooting touch he showed in college, the Mavs took a flyer on him. Finney-Smith signed a three year $3.4 million contract with the Mavs going into the 2016-2017 season.

During 2016, Finney-Smith displayed the defensive prowess and hustle that the Mavs signed him for. He earned his way into Rick Carlisle’s rotation despite being a rookie, playing in 81 games that season and starting 35 of them. His numbers were modest as he averaged roughly 4 points, 1 rebound, and 0.5 steals in 20 minutes played. Although he did not score much, his on/off splits showed his contribution on the defensive end with Dallas being +1.4 in defensive and offensive rebound percentage, +1 in steals percentage, and +1.5 in block percentage whenever he was on the floor.

In the summer of 2017 the Mavs focused on his three point jumper. Finney-Smith only shot 29% from three in his first season, despite being a 36% three point shooter in college. He pointed out that he “needed to be more consistent with [his] shot” going into the 2017 training camp. Despite a focus on his shot in the summer DFS did not show improvement in summer league action as he shot only 19% from three, making 5 of 19. Dallas would have to wait and see if his work translated into actual NBA games during the season.

The problem is that the Mavs didn’t get to see if his work on his three point shot paid off. Finney-Smith was sidelined for much of the 2017-2018 season with quadriceps tendinitis. DFS only played in 21 games last year, starting 13 of them. Most of them were at the end of the year when Dallas was already eliminated from the playoffs. However, he showed promise in his three point shot in a few of those games. In the two of the last three games of the season, DFS made three of six and four of eight three point attempts. It was looking like he was going to have some positive momentum going into the offseason.

Then in the last game of the year he shot one for seven from three. Shooting only 14% from the three point line in the last game of the season is surely not how he or Mavs fans wanted him to end the year. The silver lining to his limited sample size is that he shot almost 40% from corner threes during 2017-2018, compared to a paltry 26% in 2016-2017. NBA “3 and D” players need to be able to knock down corner threes in today’s game. It is important that he showed improvement in this area, despite the small sample size.

With the 2018-2019 season slowly but surely approaching, Mavs fans should expect that DFS was in the gym working on his three point shot once again this summer. Mavs general manager Donnie Nelson told Mavs.com’s Dwaine Price in May that DFS “getting confidence in that 3-point shot” is the next step. Finney-Smith played two games in the Las Vegas summer league this year combining to shoot 3 of 10 from three. Although shooting 30% from three is not where Dallas wants him to be, its an improvement on the 19% he shot in the 2017 summer league.

Dorian Finney-Smith is entering a contract year this upcoming season. His $1.5 million salary became guaranteed in July as the Mavs chose to keep him. Aside from being franchise point-guard Dennis Smith Jr.’s best friend on the team, Dallas will need him to continue his history of tough defense and show that two offseasons worth of focus on his three point shot is paying off. With McDermott, Ferrell, and Curry gone, it is Dorian Finney-Smith’s time to shine as an off-the-bench wing who can knock down threes consistently. If he can do that he can secure himself a nice contract next summer, just like McDermott and Ferrell did.