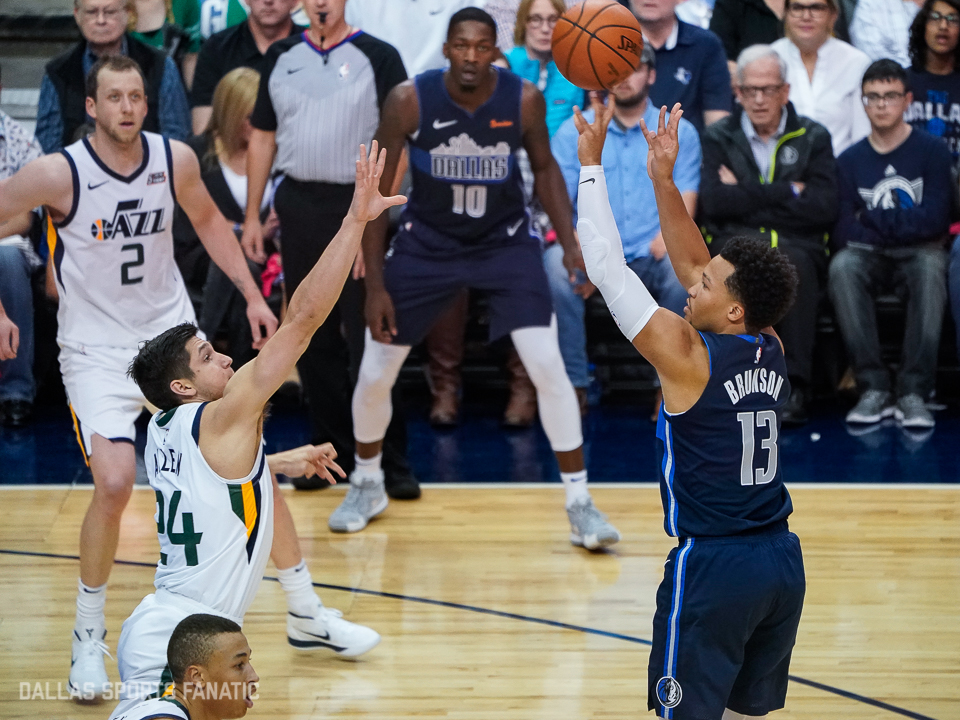 Jalen Brunson utilizing his maturity for the Mavs

Jalen Brunson utilizing his maturity for the Mavs

There was a bit of a head-scratching moment on draft night when the Mavericks selected guard Jalen Brunson out of Villanova with the 33rd overall pick.  They had moved up in the first round of the draft to get electric playmaker Luka Doncic.  They already had point guards on the roster in 2017 first round pick Dennis Smith Jr. and J.J. Barea.  There was still a feeling that guard Yogi Ferrell still had a good shot at re-signing with Dallas.  Even with all of that, the Mavericks would also go on to sign old friend Devin Harris later on in the summer.  What exactly was the fit/need here?

As a team coming off two of its worst consecutive seasons in twenty years, the Mavericks needed players with a winning mentality.  With two national championships under his belt during his college career, the 22 year-old Brunson brought that and more to the table when he was available at the beginning of the second round for Dallas.

Brunson’s college accomplishments are well-chronicled and so is the fact that his father, Rick Brunson, has basically been in the NBA as a player and coach since 1995.  It’s unlikely to find a player with a more NBA-ready mental makeup than Jalen Brunson.

When Devin Harris left opening night in Phoenix early with a hamstring injury, it opened the door for a bigger role than most anticipated for Brunson.  In October, the rookie averaged over 17 minutes per game and even started a game for Dallas when Dennis Smith Jr. had to miss a game due to an ankle injury.  Although his minutes have decreased his November and Harris has now returned to the court after recovering from his injury, Brunson knows to stay ready and keep himself in a mental and physical state that will allow him to succeed when called upon.

“I’m just making sure my mind’s right and always making sure my body’s where it needs to be,” Brunson said after a team practice last week.  “It comes with a lot of hard work, preparation and confidence.”

Even with very-established veterans in Harris and Barea in front of him on the depth chart, the New Brunswick, New Jersey native knows he has a great opportunity to learn from the knowledgeable guards around him.

“I talk to them everyday and try to pick their brain as much as I can.  Obviously I’m talking to them during games and practice as well.  They’re great people off the court so it’s very easy to connect with them.”

The feeling appears to be mutual as Devin Harris had good things to say about Brunson’s maturity and awareness on the court.

“Jalen is a great player in the sense that he’s not going to make many mistakes,” Harris remarked before returning to the court Saturday night.  “He’s very smart, he plays to his strengths and you know what you’re going to get out of Jalen.”

Even though there are no concrete minute totals set in stone for the rookie, he has still enjoyed his first month of regular season NBA play.

“It has honestly been great.  Living out my dream: Playing basketball as an occupation.  I’m working hard, so nothing has really changed for me.  Just come in and get better than I was the last day.”

The Mavericks believe in Brunson and his future in this league.  Even if he doesn’t immediately play big minutes this season, they invested in him long-term with a contract that most second round picks don’t receive: a four-year deal with three of them guaranteed.  With the aforementioned Barea and Harris in their mid-thirties, there will be a role for Brunson over the course of his deal.  The ball is just in his court to continue to develop his game and stay ready until then.

With his track record, it’s hard to imagine Brunson won’t fully grab that opportunity by the horns.