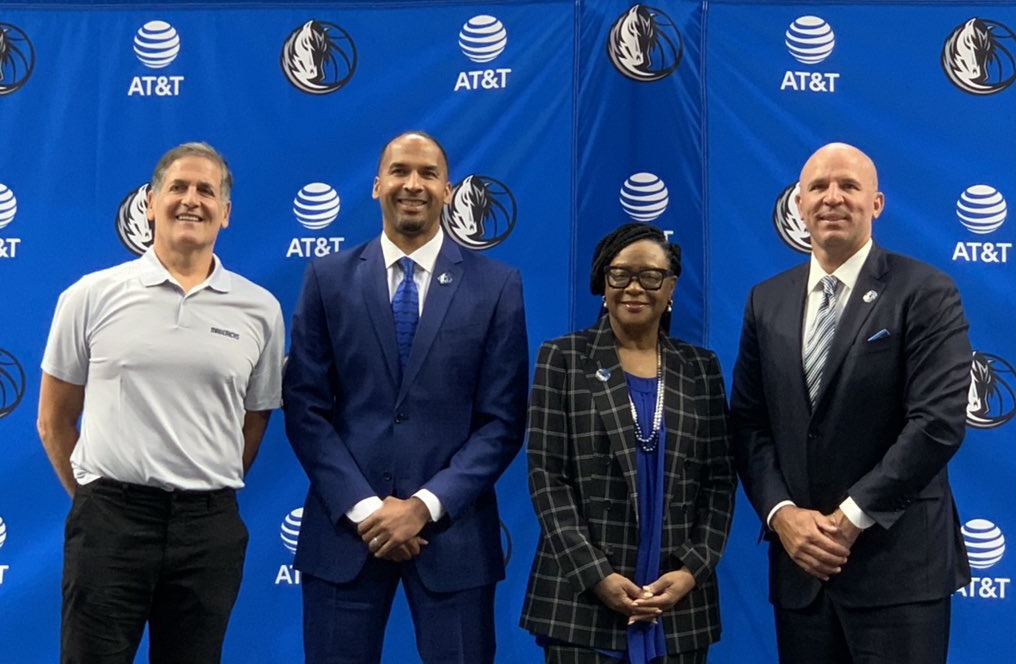 It was your typical press conference, for the most part. But the most important topic and question of the day was consistently deflected around by the entire panel.

In January 2001, Kidd was arrested and pled guilty for spousal abuse to his now ex-wife.

Following the hire of Kidd, Marshall ensured Dallas Morning News that she and Kidd had ‘long conversations’ about his domestic abuse past, which gave her confidence in Kidd as the right man for the job.

But today, questions regarding Kidd’s past and how the Mavericks went about their hiring process and investigation were answered with vague, uninspiring responses from Cuban, Marshall, and Kidd.

“We talked about his past. We talked about some of the history, and he walked me through his journey, which I will call it a journey,” Marshall said of her conversation with Kidd. “He walked me through that and at the end of that process, I very much felt like we were doing the right thing. I didn’t feel like we were undermining our zero-tolerance policy or our values or our code of conduct at all.”

Marshall stated that she wasn’t comfortable telling Kidd’s story or truly speaking on their conversation as ‘those were his words’, which is fair. But as the floor was set for Kidd, he declined to truly go in-depth about his ‘journey’.

Kidd also touched on how important it is to speak with someone and speak out on your mistakes to help people learn from both yours and their mistakes, yet he didn’t necessarily touch on his mistake extensively today.

For Cuban, who in 21 years as the owner of the Mavericks, has only had to hire three head coaches, Cuban turned to Marshall to head the vetting process of Kidd’s hire and investigation.

“I turned to our expert. When Jason’s name came up, it wasn’t an unknown and it was something that we were going to have to understand before we were to make a decision,” Cuban said. “We fortunately have someone who isn’t just an amazing business person but also has a background and experience in dealing with personnel situations that I don’t have so I turned to the person who, really is one of the rocks of this organization.”

Marshall stated that she conducted the investigation on Kidd on her own but did reach out to experts to help vet the process. During the process, Marshall followed her zero-tolerance policy, which she stated at her own introductory press conference in 2018. “The Dallas Mavericks have a set of values — character, respect, authenticity, fairness, teamwork, and safety, both physical and emotional safety,” Marshall said. “We have a zero-tolerance policy for misconduct, sexual harassment, false allegations, or anything that puts our employees in danger.”

Both Cuban and Marshall voiced their confidence in their process and in Kidd as the hire and his ability to lead this team to success.

We all saw how much of a disaster the Portland Trail Blazers introductory press conference was for new head coach Chauncey Billups regarding his past allegations. With Kidd’s introduction coming weeks after the hire, you’d think more of an explanation or prepared statement would have been given from both Kidd and the Mavericks regarding the situation.

We’re not asking for transcripts of the investigation done by Marshall and the organization nor a recording of Marshall and Kidd’s conversation, but more meat on the bone of what went into said investigation and hiring process as well as from Kidd, what he’s learned and how he’s attempted to grow as a better man over the last 20 years is something that should be warranted.

The introductory press conference can be seen here.