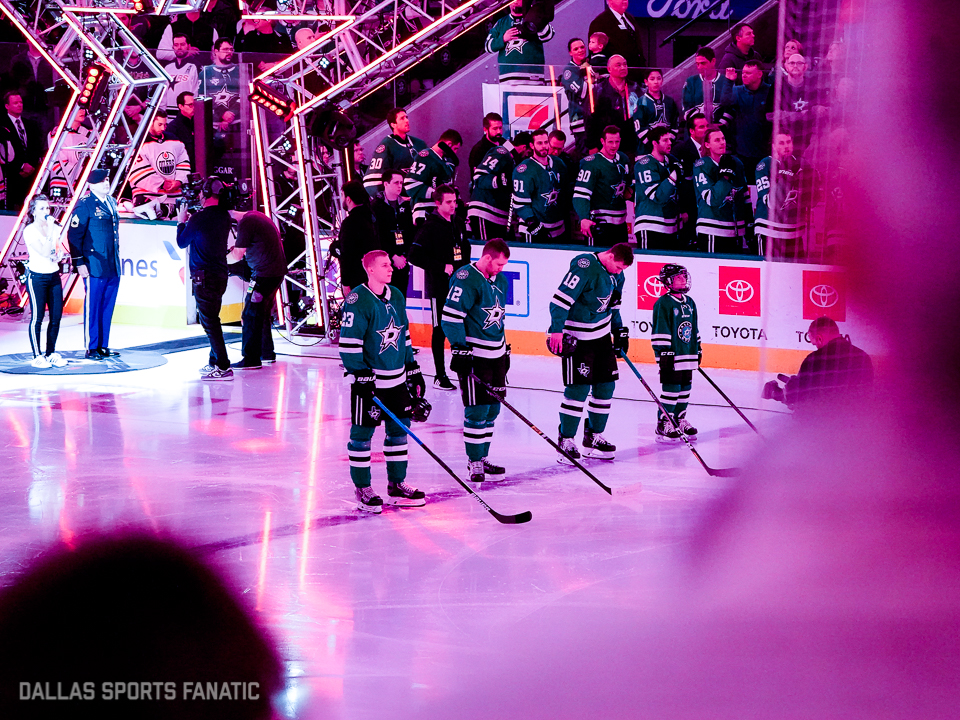 The Dallas Stars came into the game without captain and leading goal scorer Jamie Benn. Erik Condra took his place in his Stars’ debut.  Dallas won the previous match up between the two teams in overtime last November.

Washington came to Dallas for their third road game in a row, having lost the previous two games.  Looking to halt the skid, Washington has not lost three games in a row this season.

Due to an unusual error, Ben Bishop was put in the original starting lineup.  To avoid a two minute delay of game penalty, Bishop started the game, and was quickly replaced by Khudobin.

The Stars came out of the gate looking flatfooted compared to the defending Stanley Cup Champs, but a couple of Washington penalties quickly turned the momentum.

An early power play yielded no results.  However, a second penalty shortly thereafter would produce.  Seguin ripped home his 14th of the year after an Ovechkin boarding penalty on Lindell.

The period would conclude 1-0 in favor of Dallas.

Just over ten minutes into the second frame, Lars Eller opened up the scoring with a backhand that snuck past the Stars’ net minder.

With just over two minutes remaining in the period, the Stars gave up a breakaway to Nicklas Backstrom.  He made a beautiful move to his backhand, but Khudobin was able to watch him the whole way and make the big save.

The period would conclude at a goal each, with shots in favor of Dallas 23-20.

Washington came out in the third similar to how they started the first period; with speed, tenacity, and shots.

With just under five minutes to play, Ritchie received a two minute slashing penalty.  Washington continued to fire away, but were unable to put the puck in the net, due to some huge saves by Khudobin.

The Stars mustered two shots and the Capitals fourteen, leaving shots 34-25 in Washington’s favor to end the period in a 1-1 tie.

The Stars started out with Hintz, Seguin, and Klinberg for their first line, Radulov, Heiskanen, and Janmark made the second line, and Seguin, Shore, and Klingberg made the third.

They threw a couple more make shift lines out there, but it would be Tyler Seguin with his 2nd goal of the game on a beautiful pass from Alexander Radulov.

The Dallas Stars are going to have to start quicker if they want to maintain or improve their standing in the Western Conference.  Slow starts typically come back to haunt teams in the end.

The Stars’ goalies have once again flexed their muscles, showing they have one of, if not, the top dual threat in the National Hockey League.  This is the kind of goaltending that can really carry a team in the playoffs, so it will be interesting to watch for in the future.

The Stars take on the Jets Sunday in Winnipeg.