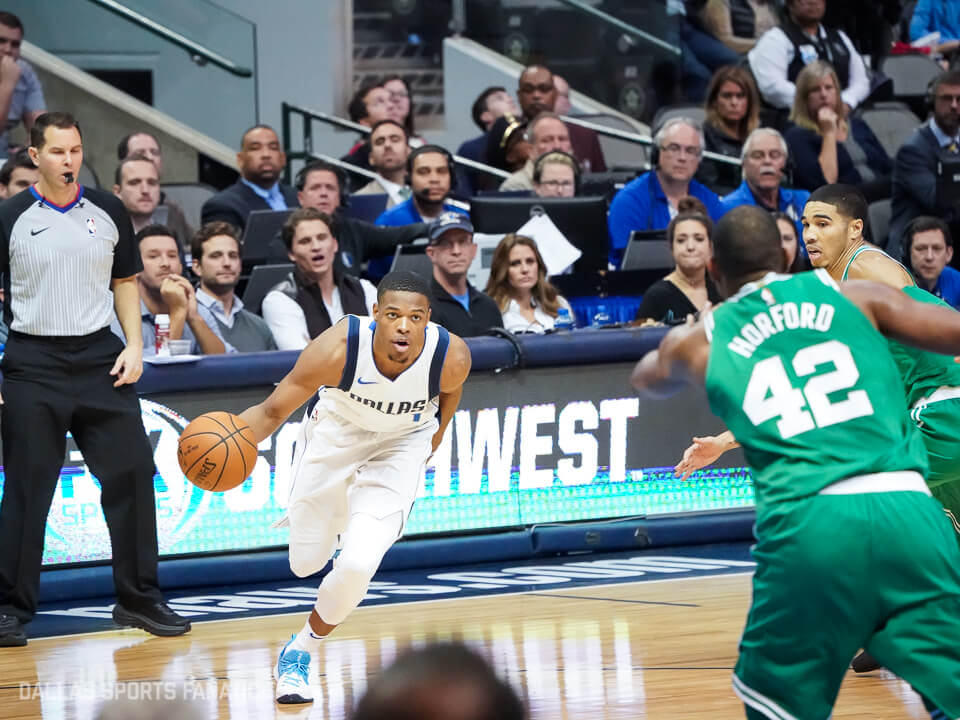 Kids or vets down the stretch? Mavs opt for the latter

Kids or vets down the stretch? Mavs opt for the latter

Had the Dallas Mavericks knocked off the Boston Celtics last night, there might not be a larger emotional gap between a 4-14 and a 3-15 record in the history of the NBA.

If Dallas had allowed Dennis Smith Jr. the chance to be in the game in the final minutes, the loss might’ve carried some reassurance that he could learn from whatever transpired. Instead, the Mavericks trusted their veterans to come through and they didn’t, leaving more unknowns about this team’s future than before.

Smith already had a shot in Memphis earlier this year to win the game and missed a buzzer beater because he held the ball too long. Both he and Carlisle called it a “learning experience.”

It’s a shame he didn’t get the chance to redeem himself last night even if it wasn’t hoisting the final shot.

It should be obvious at this point that Dallas is not 3-15 “bad”, but they have been pretty far from good this season. After the win over Milwaukee on Saturday, it was fair to wonder if Dallas was actually that “good” and if the effort was sustainable. The answer is slightly more clear.

We can argue Dallas’ strategies down the stretch as Kyrie Irving (who finished with 47 points on 22 shots) went full supernova, but even after the 13-point lead with 7:34 left in the game had all but evaporated, the Mavericks still had a chance to win at the horn.

Where the real questions are lies in what appears to be a very polarized group of people watching any and every Mavericks contest and whether they should be intentionally losing the games or, for lack of a better way of putting it, going full bore with all the young players on the roster even if it goes against who has the hot hand in the current contest whether it be J.J. Barea, Devin Harris or whomever.

Smith was nowhere to be seen in the final minutes against the Celtics as they made their comeback and that’s troubling. He finished 4-of-16 from the field with 8 points, five rebounds and four assists and +5 net rating. We’ll talk about this first.

Yes, it’s one game. Yes, this game will not drastically alter the trajectory of his career to a point where, five years from now, we’re referencing Rick Carlisle’s decision to bench his struggling rookie for more veteran players in an attempt to pull off the NBA’s biggest upset this season.

But it’s fair to wonder what could’ve been. Or even, what should’ve been? Are the supposedly tanking Mavericks supposed to defer to their younger players even if it makes no sense in the context of who is playing the best in the current game?

“We went with experience,” head coach Rick Carlisle said after the game. “The other guys were into flow.”

Fine. Maybe Harris and Barea gave you the best chance to win down the stretch, but that same group was part of the bunch that turned the ball over five times in the final six minutes for the Mavericks.

The question has been asked. What’s the point of trying to win a November ball game when you’re sitting at 3-14 and these players have no bearing on what you’re trying to build for the future?

(Also, a darkly humourous bit on Nerlens Noel. His stat sheet says he played zero minutes, but in reality, he played .4 seconds to close out regulation.)

Carlisle is not going to win anyone over with this philosophy and it certainly does more to cement the theory that he values veterans over rookies and younger players. It’s definitely a valid argument for Smith to be out there in situations where he could possibly had the game in his hands.

If it’s me, I agree with Barnes taking that final shot. He’s your cornerstone going forward and, sadly, the time for Dirk to be launching prayers at the horn has come and gone.

At the end of the night, the result was the same as it has been 14 other times for the Mavericks this season, a loss. However, it can be argued that Dallas’ kids could’ve benefited more from it regardless of the final score.