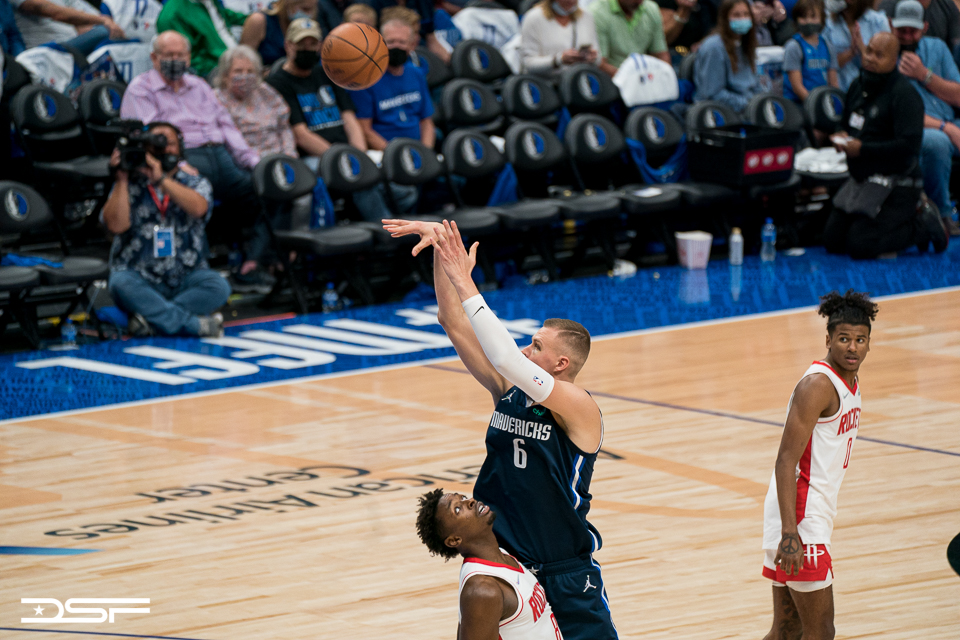 One of the Mavericks’ biggest selling points for why they could take a major step forward this season was the improved performance of big man Kristaps Porzingis under new head coach Jason Kidd. He was entering an offseason healthy and eventually made it through training camp healthy. He was set to make big things happen following his disappointing and heavily-scrutinized playoff performance against the Los Angeles Clippers last summer.

Well, the results aren’t exactly too pretty through the team’s first three games of the season. Through the first two games, he shot just 33% from the floor (11-33) and was struggling with any kind of post-up opportunity with four turnovers in the opener against Atlanta. Then came Tuesday night’s home opener win over the Houston Rockets.

Porzingis played slightly less than 20 minutes after leaving the game late in the third quarter due to back tightness, an injury that Jason Kidd downplayed after the game, and he shot a miserable 2-10 from the field for 9 points to go along with just 3 rebounds. Not exactly the stat line you want to see from the highest paid player on the team this season at about $32 million.

Before any further criticism, Kristaps is certainly owed some praise for his general energy and engagement on defense so far this season. His four blocks in Toronto on Saturday night were exciting to see and his general movement on the court so far appears to be improved over last season when he was a total liability on defense. However, he’s not Rudy Gobert, so the guy is going to make his biggest impact on the offensive end.

In Porzingis’ defense, the entire Mavericks team is struggling with their shot through three games. Dallas is 29th in the league in field goal percentage at 40% and then 26th in three point shooting percentage at 40% despite taking more three’s per game than all but two other teams through the first week of the season. The offense of the Mavs isn’t just struggling because of Kristaps Porzingis. Nobody is shooting well at all besides a hot streak in a quarter here or there from Tim Hardaway Jr. on Saturday night or Reggie Bullock in the third quarter Tuesday.

What Porzingis does need to be criticized for, however, is how he either refuses to get in position to find himself easy baskets, or simply doesn’t have the skillset to do so. So many of the shots he attempts are an absolute struggle and would seemingly be rated as “low percentage.” The pull-up jumpers off the dribble, the pump fakes and then trying to make a move towards the basket, the three point attempts from near the logo. Not even Luka Doncic can do those things efficiently.

While I’m not the guy who pounds the table for KP to be getting 10 post-ups per game, he should be taking plenty of shots inside the paint. The key is that he needs to use his size and length better to get into a position in the paint where Doncic can use his precise passing skills to get him the ball up high with a chance for an easy attempt at the basket without so much as a single dribble. Think of the two-man game Luka loves to play with Boban Marjanovic whenever he’s in the game. So many easy baskets if the pass is able to get there. Admittedly, a few too many turnovers as well, but this should still happen a few times per game for Porzingis. Of course, Marjanovic has hands the size of Texas and about 50 pounds on KP, but the length and ability to have your hands higher than just about anyone else on the court should be utilized more by Porzingis.

KP could also consult with another teammate to help him find some easy baskets. Dorian Finney-Smith often finds himself spotted up in the corner like Porzingis from time to time, but Finney-Smith crashes the offensive glass off of cuts to the basket better than anyone on the Dallas roster and it occasionally leads to monstrous putbacks.

Finney-Smith with the putback 😳 pic.twitter.com/dr5a1GR67F

I’m not trying to say “Hey just go jump and do a slam dunk” as if it’s nothing, it’s just that Porzingis could crash the offensive glass a little bit more and find himself in position to score some easy baskets close to the hoop.

The point is that he needs to embrace a little more of the beauty of his teammates’ ability to relish their role of making open shots on the perimeter and then create situations that find yourself in a position to make an easy shot close to the basket. The guy just needs to see some more shots go in. There’s an odd energy anytime Porzingis has the ball and tries to make something happen one-on-one. The critics get ready to pounce and the defenders have to feel bad for the guy.

Kristaps Porzingis doesn’t have to be max-level paid role player, but he needs to realize that he doesn’t need to be the Kobe Bryant or Carmelo Anthony he grew up idolizing. There’s a middle ground where he gets the second most shots per game on this Mavericks team, but they’re as a result of him putting himself in better position to succeed with “easier” or “higher percentage” shots. Hopefully the back tightness isn’t anything that will keep him out and he can get to work on improving his play for this team that absolutely needs him to play well to reach their goals.