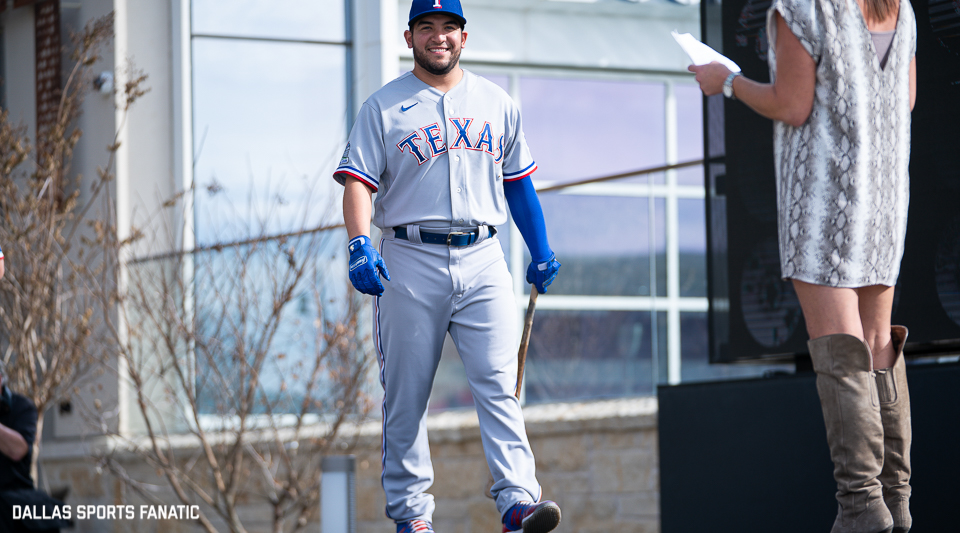 Let’s Get it Started: Some notables as the Rangers begin their first day of camp

Let’s Get it Started: Some notables as the Rangers begin their first day of camp

It was the first day of training camp, almost all pitchers and catchers have arrived in Surprise, Arizona (a few had visa delays). It usually resembles the first day of school. Remember that? When you walk into the building, you see some friends, some new people, and converse about the summer you had. You can even imagine media people talking to players like faculty and staff members talking to kids about their schedules. 2021’s first day of camp was a little different.

First, Chris Woodward addressed his group through zoom and not in person. Add to that a small zoom malfunction caused him to talk to his players with no video (like I do when I don’t wear a shirt). Second, the club utilized six fields, which became problematic to witness everyone getting their work in. It could be a matter of students doing portions of homework and comparing notes. Protocols are still in order, and roadblocks emerge, but the Rangers will deal with it like the other twenty-nine clubs. Here are a few tidbits from day one of training camp:

Jose is likely the Rangers’ opening day starting catcher in Kansas City. However, it’s more than just winning a job at catcher. The Rangers’ pitching staff has a vast young core with a few haven’t worked with Trevino. Therefore, what is Jose doing to help that? Well, get to know them on a professional and personal level. “I want to get to know them off the field as well, not only as a teammate but as a person,” Jose told me Wednesday. “I won’t let them know first off that, hey, I got you’re back, anything you need, I’m here. If you need me to run through a wall, I’ll do it.” There’s talk about now that Lance Lynn, Mike Minor, and Elvis Andrus are gone; who is the leader in that clubhouse? Jose Trevino is making his case early on.

On the diamond, there are a few intriguing spots. Notably, third base and first base are the more heavy-discussed spots. Third base resembles a spinning Wheel of Fortune, but first base is pretty clear cut. I mean that it’s between two guys. We all knew this, but the question would be, what happens if Ronald Guzman does well and Nate Lowe does well? That portion of the equation got interesting. I asked Chris Woodward if Nate Lowe would get any reps at third base. “We want to take his mind off of third base because I know in the past it hurt him from his hitting. Right now, we are just having him focus on first base and having that competition with him and Guzy,” Woody said to me. Now Woodward wasn’t against Guzman playing in the outfield if he brought it up to increase his versatility, but it’s clear that it’s an all-out duel between the two.

Well, per #Rangers manager Chris Woodward you can eliminate one name off the third base possibility list:

Woody said he wants Nate Lowe to concentrate on first base, so it's Lowe vs Ronald Guzman at first.

On day one, Drew Butera is making an impact on Jose Trevino. Jose spoke about the experience of Drew and increased Trevino’s aspiration. “He caught the last out of a World Series, that’s everybody’s dream. Every catcher’s dream is to make that last out,” Jose told me. Butera caught the last out of the 2015 World Series in the 12th when Wade Davis of the Royals struck out Wilmer Flores of the Mets. Trevino told me that Drew still carries the ring on him. “He showed me his ring today. He carries it around in his backpack, which I think is pretty sweet. Hopefully, I can have one with a Texas “T” on it and carry it around everywhere.”

Drew Butera also has some nasty stuff on the mound too FYI (From 2016). #Rangers https://t.co/ymAIRNK177 pic.twitter.com/4IRE85LJf8

Navigating through a shortened Spring Training

While it may not seem like it, Spring Training is shorter than normal years. In 2021, the Rangers will play eight fewer Spring Training games, mostly due to the removal of split-squad games this Spring. In 2019, the Rangers had five days where they had two separate teams play on the same day, and now in 2021, it’s nine or ten innings, and that’s the day. It could create an issue, but Chris Woodward isn’t worried. “When we need innings, we can contact other teams. Obliviously, the Royals are right next to us, so if ever we need [extra] games or extra innings, we can reach out to other clubs and figure out ways to get our innings in,” Woodward told me.

While the season has a lot of uncertainty on the field and stands, it certainly adds some normalcy with baseball back. The city of Surprise did announce that Surprise Stadium will hold up to 2,000 fans, which is something the Rangers haven’t seen in over 11 months. Baseball is back and ready for the school year!

Fans will be allowed for Spring Training in Surprise, but a limited capacity of 2,000 per game.

Rangers GM Chris Young gave an update on eight players dealing with an injury or a visa delay.