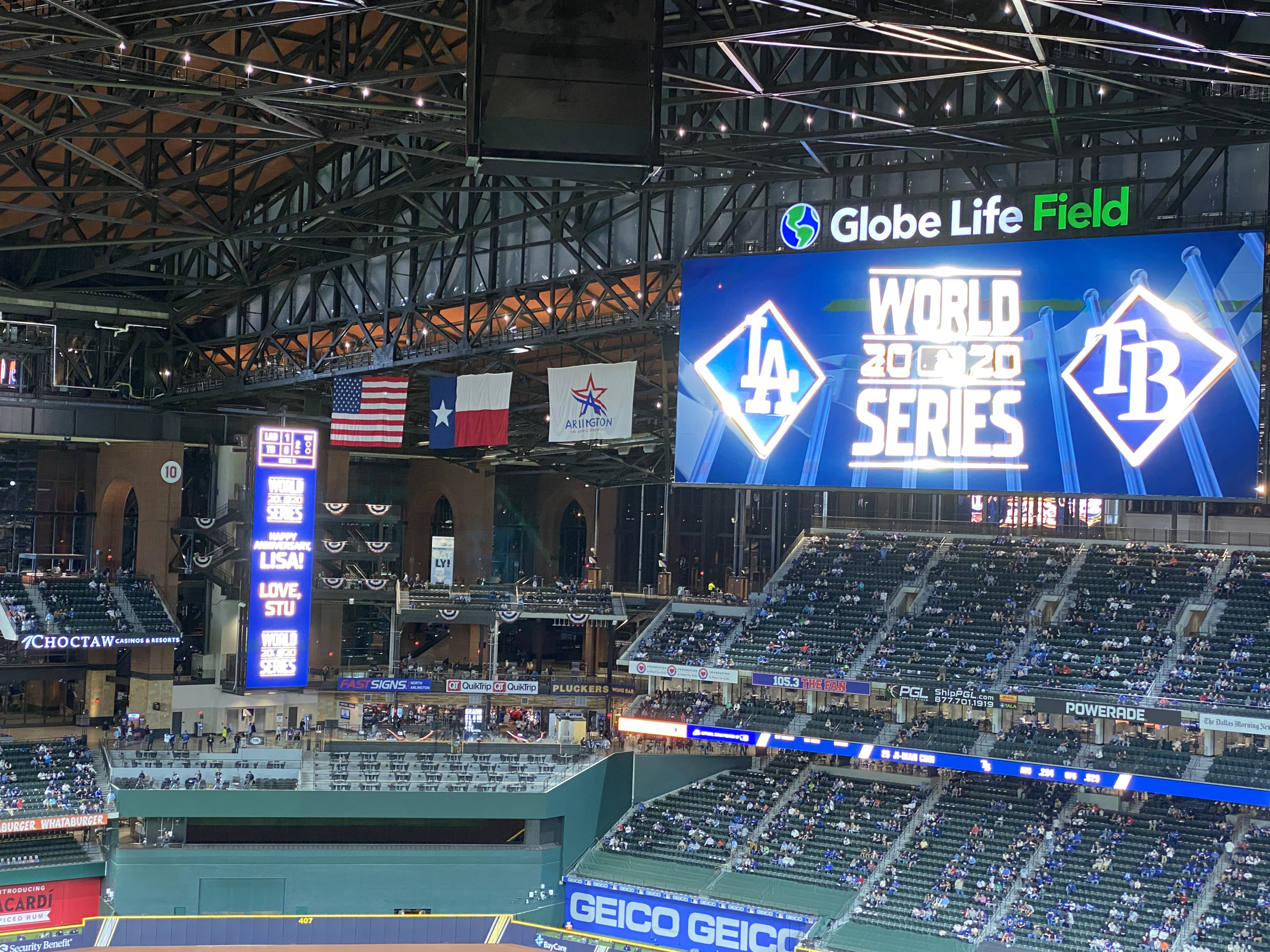 The called third strike from Dodgers pitcher Julio Urias to the Rays Willy Adames won the seventh title in Dodgers’ history on Tuesday night. It also concludes a mystifying 2020 MLB campaign and Globe Life Field’s intriguing inaugural season. I feel like baseball nation, fans, media, and players discovered a lot in the three to four months Globe Life Field hosted baseball games. It started as a palace where even an aluminum bat couldn’t ease a simple home run. The Postseason changed that mentality, and homer balls flew out faster than a released stink bomb in a closet. I felt like the ballpark played fair to hitters and pitchers. It didn’t allow cheap homers like Yankee Stadium or Minute Maid Park, but it forced teams to play gap-to-gap.

One aspect that grew was the crowd noise. It got loud in the NLCS and World Series, and to think the crowd was only a quarter full is staggering. On a regular night, the Rangers look to draw between twice or three times more than the allowed postseason crowd in 2020. It got me thinking, what were others’ opinions? Therefore, I asked some experts how they perceived Globe Life Field in year one.

Overall thoughts on Globe Life Field one season in (from an architectural and playing field perspective)?

Jeff Passan (ESPN): Aesthetically, it’s fine. [It’s] nothing special. It falls into the middle tier for me, which is no insult. I just gravitate toward stadiums with charm, and Globe Life is relatively antiseptic. In terms of the field itself, I really like it. Bandboxes may make for wild games, but expansive stadiums that have jagged outfield fences are more my style. There’s more opportunity for action with them, and I’m all for more action.

Levi Weaver (The Athletic): From an architectural perspective, I think it’s much prettier from the inside than the “giant warehouse” photos we saw early in the year. I really like the view from behind home plate looking out the windows in left field. The press box is a million miles in the air, and that’s frustrating, but won’t affect the fans, really. I think the one massive success is that we’ve heard almost nothing about the turf. It hasn’t really come up at all, even from the Dodgers, who usually play on grass and have played a lot of postseason games here. I was skeptical, but it seems to have worked great.

Evan Grant (Dallas Morning News):  I’m not crazy about the exterior of the roof. Compared to the old ballpark, it’s very bland and generic. And inside it’s not like there is anything dramatic. But the place has grown on me as a place to watch a baseball game. The seats are on top of the field. It gets loud. Seats are unobstructed. The concourses are wide and open to the game so you don’t feel “locked out” if you go to get a soda. The artwork is really cool. I’ve said that this place feels much more Rangers-branded. The old stadium was a tribute to Texas and to baseball history. This is clearly the Rangers’ park.

Tonight’s panorama is from the rocking chair seats. pic.twitter.com/rQJHZcWmZG

How loud do you think Globe Life Field will be once the stadium is packed considering how the noise was with 11,000 people?

Jeff:  Tough to say, but if Rangers fans come with the same energy that the 10,000 or so Dodgers fans at the World Series have brought, the place could get loud. In recent-vintage playoff games, the Astros have kept the roof at Minute Maid Park closed to glean the dome advantage. It’s a real thing.

Levi: I’m going to need to invest in a Costco-sized bag of earplugs when the Rangers are good again. It’s going to be deafening, and I mean that literally.

Evan: How loud I can’t answer. But I was impressed with the loudness just of 25 percent attendance. Part of that is clearly we are exposed to the fans where we previously were not. But the place is loud. It’s going to create a home field advantage for this team when this team is good.

And so it begins: there are officially fans at an MLB game in 2020. Rejoice or despair as you see fit. pic.twitter.com/0hn8ZduHzs

Do you believe Major League Baseball should adopt neutral sites for the World Series, similar to the Super Bowl?

Jeff: I can see the argument in favor of a neutral-site series, but it presupposes the idea that baseball is more than a parochial sport, which is a tough argument to make. It’s one thing to convince 10,000 people to travel somewhere on short notice. But 40,000? Either you wind up with empty seats for your most important games or it turns into such a corporatized event that the atmosphere to which you’ve grown accustomed as a sport for such games simply vanishes.

Levi: I think neutral-site World Series are an absolutely horrible idea. We’ve seen it this week — the Rays were the “home” team, and their “pump-up” videos were getting booed by Dodger fans. Small market teams — working at a disadvantage to begin with — already get the short end of the stick when it comes to postseason start times. It’s absurd to think it will be “neutral”, and we’re seeing a prime example this week.

Evan: No. I just don’t believe in locking local fans out like that. I see a lot of advantages to a neutral site celebration of the game, but I just can’t get past local fans essentially being completely priced out of attending. Add the cost of planes/hotels/meals to tickets and it becomes a completely 1% event. I want people with passion more than simply rich people with cash.

Dave Roberts is taking out Clayton Kershaw after 5 2/3 innings, and Dodgers fans do not like it. Serious boos — and an ovation for Kershaw as he leaves the field.

From a roster perspective, are the Texas Rangers built for their ballpark?

Levi: One (shortened) season is probably too early to say for sure. They looked pretty bad this year, but there were only 30 home games, and management (rightly) pulled the plug on the season and brought in the young guys about halfway through that. Who knows how that adjustment would have played out with a full season? I think we’ll know more after 2021, and so will the Rangers, as they continue to adjust and restructure the roster.

Evan: They are not built for any ballpark at this point. They are not a very good team. But what this ballpark has shown is that good teams have lots of different ways to beat you in this place. You don’t have to just hit homers, though it’s not unfair to power hitters. You can spray the ball all over the field to great success. You can use athletic defensive outfielders to make plays. Pitchers can occasionally get away with mistakes and not be punished on really good pitches. It’s a fair park. It just requires good players.

Despite owning the second-worst record in MLB, the Rangers finished 16-14 at home (better than twelve MLB teams). Now that the baseball world saw Globe Life Field, it’s time to adjust. Rangers’ players got their first look, and now it’s time to embrace the new home.