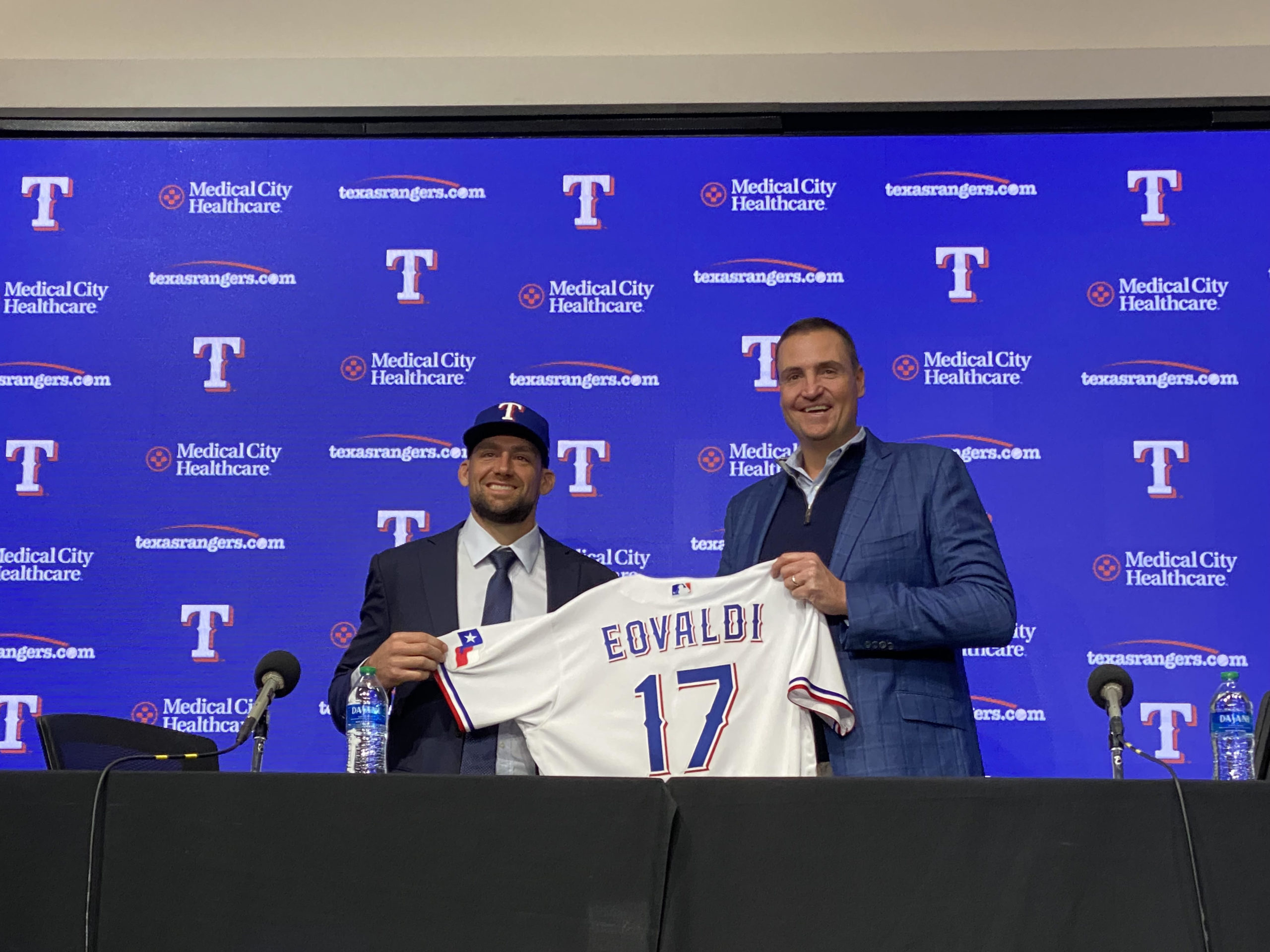 Looking Ahead at a Texas-Sized Rangers Starting Rotation

Looking Ahead at a Texas-Sized Rangers Starting Rotation

Jordan Lyles, Mike Foltynewicz, Kolby Allard, Dane Dunning, and Kyle Gibson were your top five starters regarding how many starts were made in the 2021 season. Then, of course, add Taylor Hearn, Kohei Arihara, and Spencer Howard, who each made eight or more starts too, but, my goodness, the rotation changed fifteen months later (Dane Dunning remains the lone wolf in the group). On Thursday, the Rangers introduced another projected starter in the rotation, Nathan Eovaldi coming off a season where he threw 109 innings in twenty starts for the Boston Red Sox.

The Texas Rangers rotation stacks up with Martín Pérez, Jon Gray, Jacob deGrom, Andrew Heaney, and now Eovaldi. Add to the mix Jake Odorizzi (who the club acquired from Atlanta this off-season), Glenn Otto, Dane Dunning, Cole Ragans, Spencer Howard, and many other options and you have a nightclub VIP guest list worth of starters on the roster. “We have been fortunate that we had a number of talented players that want to be Texas Rangers,” Rangers general manager Chris Young said. “We knew that we needed multiple starting pitchers, and I think we’ve addressed that, done that, and feel very good about not only the quality but the depth of starting pitching we have coming into the season. Young finished the sentence by saying, “You can never have enough starting pitching,” Young chuckled.

Let’s first look at this Picasso of a rotation that the Rangers built in two off-seasons.

Once a teammate, always a teammate! @Rangers | #StraightUpTX | 📺: BSSW pic.twitter.com/ci5CrUaGgE

An older rotation begs the question of durability, a critique of whether these guys can stay healthy. But, as Nathan Eovaldi said on Thursday, it’s not only about the five guys in the rotation. It’s about everyone else too. “We can’t do it with just the five guys, we have seven, eight, nine guys, but everybody has the right guy ready to come up and help the team to compete,” Eovaldi said. “We have an abundance of starting pitching, and that’s not even reaching to the minor leagues for the arms ready to come up.” So what could be the plan with last year’s starters who await in pitching limbo?

The Rangers may add two previous starters as long relievers to the bullpen. Who that is will depend on Spring Training. If the market is feasible, the club may also exercise a trade involving one of those guys to get an outfield bat. As expected, all five starters feel good and physically ready to go in about six weeks until pitchers report with catchers, but there’s a lot of competition waiting in the wing.

Here we are at the tail-end of the winter offseason. The pitching roster vastly changed, compared to the past two seasons, as the front office indicated it would. Now is the time to take the resources the Rangers brought in through free agency (and a few trades) and showcase it to the baseball audience and themselves, to what Nathan Eovaldi said Thursday. “It’s time to prove to the younger guys and the guys that are already here that we can compete and win.”

DOMINATE PLAYERS IN THE ROTATION.