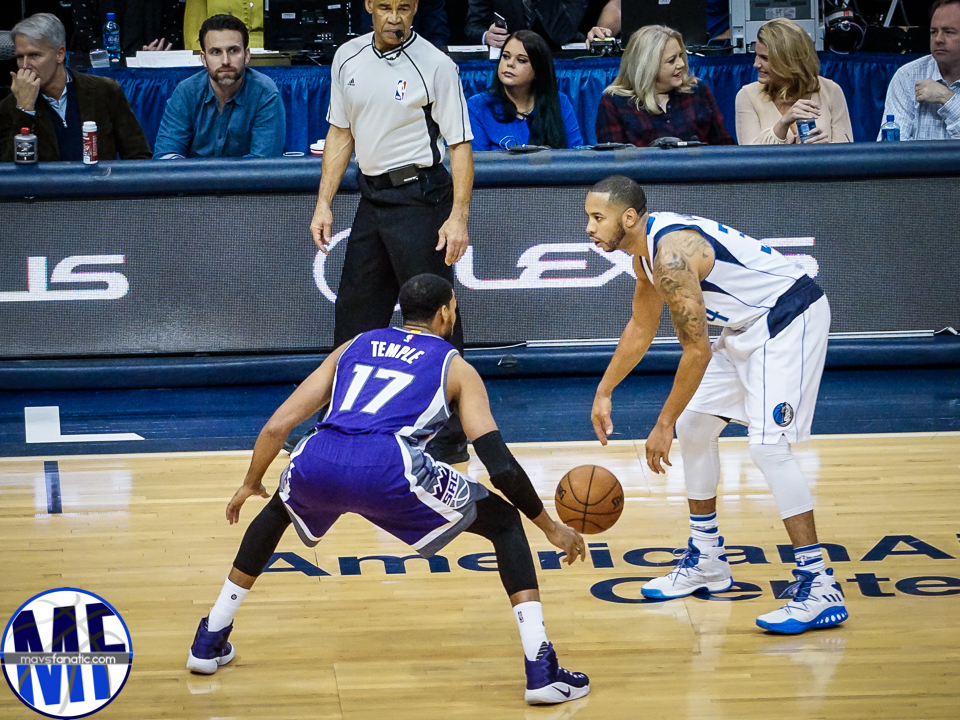 Lottery-bound Mavs and Kings face-off in a game that has NBA Draft implications.

Lottery-bound Mavs and Kings face-off in a game that has NBA Draft implications.

A day after learning that they had been eliminated from playoff contention, the Dallas Mavericks came out and beat a good Milwaukee Bucks team on the road, 109-105, with 15 of Harrison Barnes‘ 31 points coming in the 4th quarter. It was a testament to how this franchise approaches things. They aren’t playing to lose in order to possibly get a higher draft pick. They’re continuing to play hard every game in order to lay the right foundation down for the young guys already on the roster. Although most don’t see much value in winning any of these remaining 6 games (I’m guilty of thinking this way lately), obviously the Mavs do, so you can bet that no matter who plays or sits against the Sacramento Kings, they will be trying hard to win their 2nd game in a row.

That being said, the best possible thing (draft-wise) that could happen for the franchise going forward would be if they lost these last 6 games while still remaining competitive. Its ok if they lose while still giving it their all. That’s not considered “tanking” or throwing games. The Mavs, currently 9th in the NBA Draft order, are only 1 game up on the Minnesota Timberwolves (8th) and 2.5 games up on the Kings (7th). The further the Mavs fall in the standings, the better chances are of them being able to snag a franchise-changing player. Although nothing is guaranteed when drafting high, this year’s draft class is talented enough to justify “organic tanking” in these last few games. A.k.a., a lot of us are hoping to see 30+ minute nights from young prospects like Nico Brussino, Jarrod Uthoff and A.J. Hammons, while veterans like Dirk Nowitzki and Wesley Matthews take some time off to recover from the bumps and bruises of a long, tiring season.

1) If you’re a true diehard MFFL, you don’t really need any reasons to watch the team play every night. But just in case you’re struggling with the Mavs being eliminated from playoff contention, you should watch this game to see how the young guys continue to develop their games, especially Yogi Ferrell. He has proven to Rick Carlisle that he can produce as a starter or as a bench player. He brings the same energy every single night, no matter what his role is, and that is huge for the Mavs going forward. Also, I realize this highlight of Yogi isn’t from the Milwaukee game, but it deserves to be seen again.

Watching the fourth quarter of Mavs – OKC, and Yogi Ferrell's step back three on Steven Adams was just mean. pic.twitter.com/crSLGqrLGe

2) Another reason you should watch is because J.J. Barea and Nerlens Noel have a little chemistry thing going on, and it’s been really fun to see. Lobs from the little man to the big man are becoming a nightly occurrence, and it’s easy to see how this kind of chemistry could carry over into next season.

This has become a pattern… #MFFL pic.twitter.com/y5J9FCiGSY

3) The final reason you should watch is to continue witnessing what has been a career year for Harrison Barnes. At 24 years old, Barnes is averaging a career high 19.5 ppg, while shooting nearly 47% from the field overall. In 4 years with the Golden State Warriors, Barnes averaged 10.1 ppg, while shooting 44.6% from the field. Not only are his numbers up, but he’s also learning how to close games, as seen recently in the Mavs win over the Bucks. It’s exciting to think just how good Barnes can be once he starts to get more respect (calls) from the refs.

Mavs @ Kings tips off at 9:30 CDT and can be watched on FSSW or NBA League Pass.