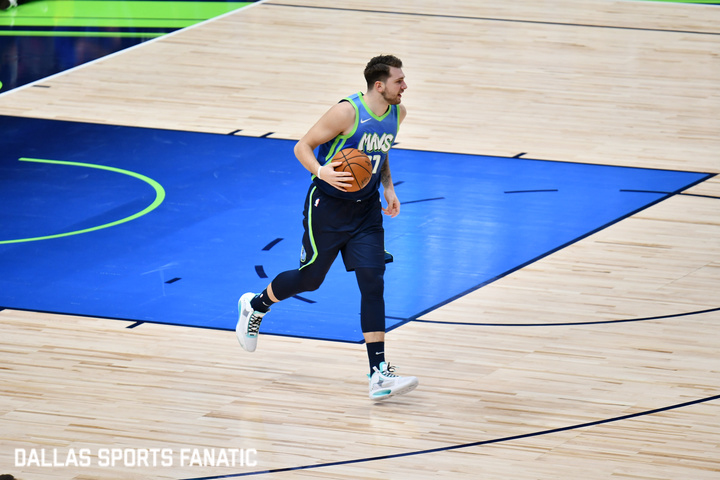 After three days without a game that included the Christmas holiday, the Mavericks and their MVP Luka Doncic were back in action at the American Airlines Center on Thursday night against the San Antonio Spurs.  While it certainly wasn’t pretty – the Mavericks shot just 42% from the field and Doncic and Kristaps Porzingis combined to shoot just 13-38 overall – Dallas was able to get back in the win column defeating the Spurs 102-98.

Carlisle on @luka7doncic: “He will play.” I also asked about any minutes restrictions. #MFFL #mavs @dallasmavs pic.twitter.com/tKvZVSfcDE

It was Doncic’s first game back from an ankle injury that had sidelined him since the injury occurred against the Heat back on December 14th. While his shot certainly wasn’t back in peak form with a 9-23 shooting line, Luka seemed to be moving just about as well as he was prior to his ankle sprain.  He was constantly creating for others with 8 assists on the night, jumped up to grab his customary 10 boards and then seemed to show great bursts of speed when driving into the lane or pushing the ball up the court.

“It was great being back” 👏

The fact that Doncic ended up missing just four full games, you could call it five since he left so early on in the Miami game, would be pretty shocking to those who were jumping to conclusions after initially seeing the still images of him rolling his ankle less than two weeks ago. While it’s unlikely that he’s at total full strength more than a third into the long NBA season, the Mavericks dodged a major bullet with him missing such a considerably small amount of time.

Fourth quarter run fuels the win
The Mavericks will look back on this game as won they should have won quite comfortably.  They weren’t hitting shots and were allowing an inferior Spurs team to hang around for virtually all of the first three quarters.  It wasn’t until the fourth when the Dallas supporting cast took over the game and gave them a lead that was too much for San Antonio to overcome even with a superficial comeback in the final minute to make the game look close at 102-98.

In a 92 second frame in the middle of the fourth, the Mavericks went on a 12-2 run fueled by depth guys like Dorian Finney-Smith, Delon Wright and Jalen Brunson to give them a 100-85 lead.  While Luka still got to 24 points on the night, he and Porzingis’ offensive struggles called for the role players on the roster to step up and they did not disappoint when it counted in the fourth.

Big-time hustle plays and some even bigger 3s… just another day at the office for @doefinney_10! 😤#MFFL pic.twitter.com/vsrQVLZ9mG

Mavericks coach Rick Carlisle never hesitates to praise Finney-Smith when given a chance in front of the media, but tonight was exactly the kind of night where Dorian laid out why what he brings is so appreciated by his coach.

“Dorian is having a great year,” Carlisle said after the game. “His stats aren’t gaudy, but he is a consistent presence for us.” Finney-Smith also seems to have made the same kind of impression on Carlisle that Jalen Brunson has and Rick happily referred to the second year guard as a “coach’s player” with a smile on his face during a media session last week.

While the Spurs shot a decent 48% overall from the field on the night, their 28% clip from deep on 29 shots compared to 40% on 40 three point shots for the Mavericks was likely the difference in this game and will likely be the difference in the Spurs being anything seriously worth watching this season.  Now 12-18, they’re a long way from the championship contender we’re used to seeing Gregg Popovich leading year in and year out.

The Mavericks (20-10) will now head out to California to take on the Warriors on Saturday night.