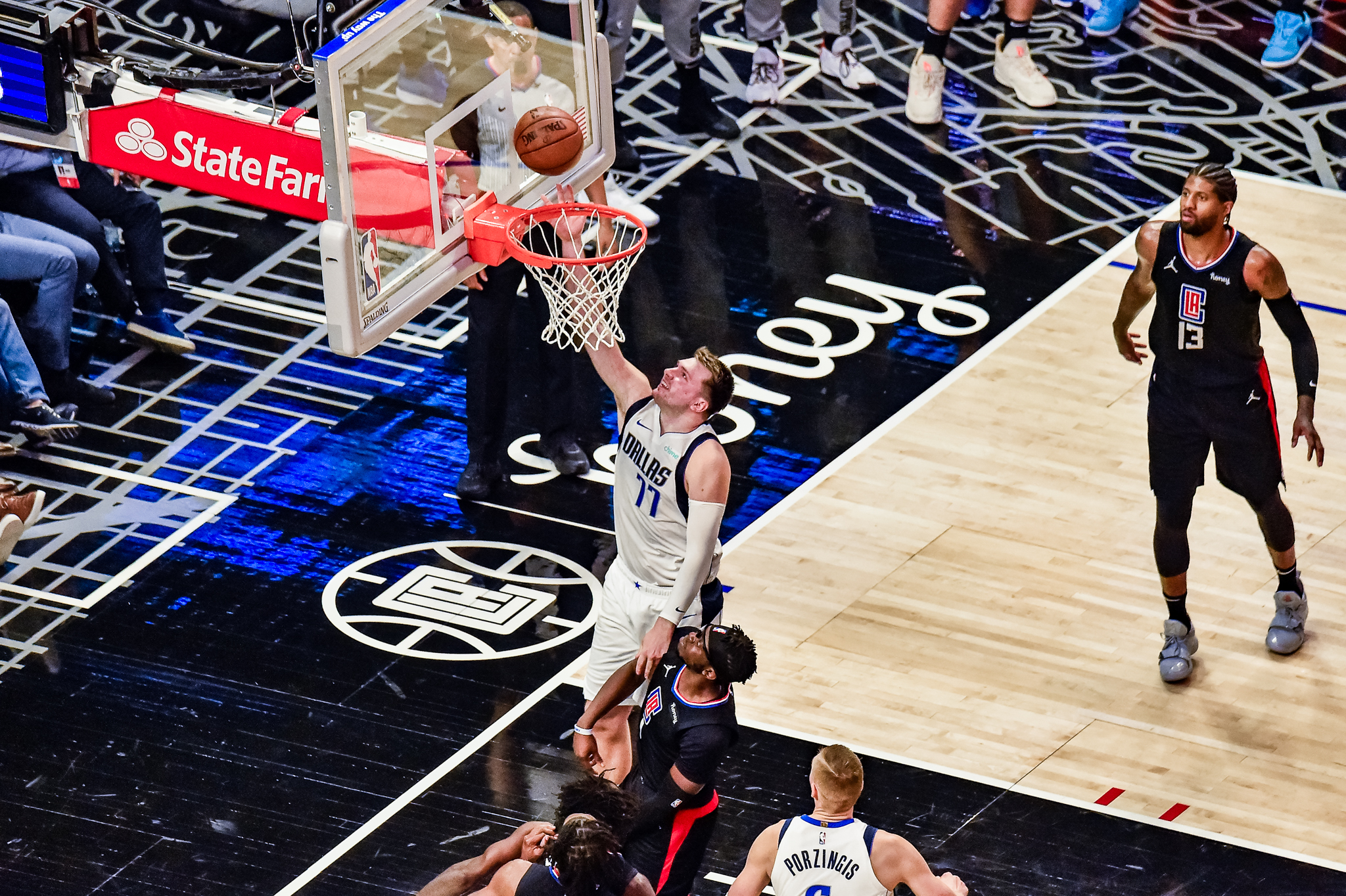 The Dallas Mavericks escaped a furious LA Clippers’ comeback bid in the waning moments of a crucial game five to pick up a 105-100 win in a series that was tied 2-2 before tipoff.

Having never been done before, the road team has won each of the first five games in the series, adding to the ridiculousness that is already being put forth in the form of awe-inspiring on-court performances.

Luka Doncic casually hit five three-pointers in the first quarter to set the tone that his neck/shoulder injury is a non-issue en route to another 40+ point performance, his fourth time accomplishing such a feat with less than two playoff series under his belt.

With reports coming out quickly between games four and five that Luka’s cervical issue was “improving,” Doncic promptly put worried minds to rest as he came out gunning from deep, connecting on his first five three-point attempts.

If not for a late-quarter heave to work the clock to gain the final possession, resulting in a sixth long-range attempt and Luka’s first miss, he would have finished the frame perfect from deep while leading all scorers with 19 points.

He continued to stuff the stat sheet throughout the game and was at his best when paired with Dwight Powell as his roll-man.

Dallas went on a 25-5 run to close out the third quarter and almost every single offensive possession was initiated by a high screen set by Powell followed by Luka probing the defense and choosing whichever option he pleased.

Whether it was an aerial attack of lobs, one of which was caught by the man himself, kick-outs to open shooters or fancy footwork leading to floaters in the lane, Luka feasted while working in the high pick and roll with Powell, finishing with 42 points, 14 assists and 8 rebounds on the night.

While Doncic was having a field day, no Maverick other than Tim Hardaway Jr. scored in double digits.

THJ managed 20 points in his robin-like effort in attempts to aid Doncic, but did so on an inefficient 6/19 from the field and 3/9 from deep.

On the other side of the scorer’s table, the Clippers had all five starters in double figures and saw spot-starter Reggie Jackson catch fire from deep.

Conventional thinking would presume LA would have come out on top based on those numbers, but luckily the Mavericks’ role players were able to pitch in down the stretch when it mattered most.

Luka had clearly fallen into a funk as the Clippers mounted their comeback, coming within four points with four minutes remaining.

Then Timmy hit his biggest three of the night, followed by a rare-sighting of the foul-riddled Kristaps Porzingis, swishing in just his sixth shot attempt of the night as he only saw 30 minutes of court action.

If not for the Mavs’ second and third options hitting big shots when needed, Luka Magic’s performance would have been for nothing.

The proof is in the paint

In the five games played so far in the series, the Mavericks have come out victorious when able to hold the Clippers from scoring more than 40 points in the paint.

In the two Dallas losses, LA converted 46 points in the paint in game three and 44 in game four.

The one aberration was game two when Dallas hit an absurd 18 threes at a 52.9% clip.

The Clippers scored an eye-popping 60 points inside, but that matters less when you can’t miss from three-point territory in a shootout.

In the game one and five wins, Dallas held LA 38 points in the paint each time, forcing the Clippers’ perimeter players to carry the scoring burden.

Head coach Rick Carlisle made a clear adjustment to hinder the ability of LA to enter the paint at will by inserting 7’4’’ Boban Marjanovic into the starting center role for game 5 and made his presence felt all night when opponents entered the lane.

If the Mavs can begin game six with a game plan of packing the paint and forcing the Clippers’ stars into tough looks, they have seen firsthand it is a recipe for success, but Doncic will need the help of the co-stars when all is said and done.