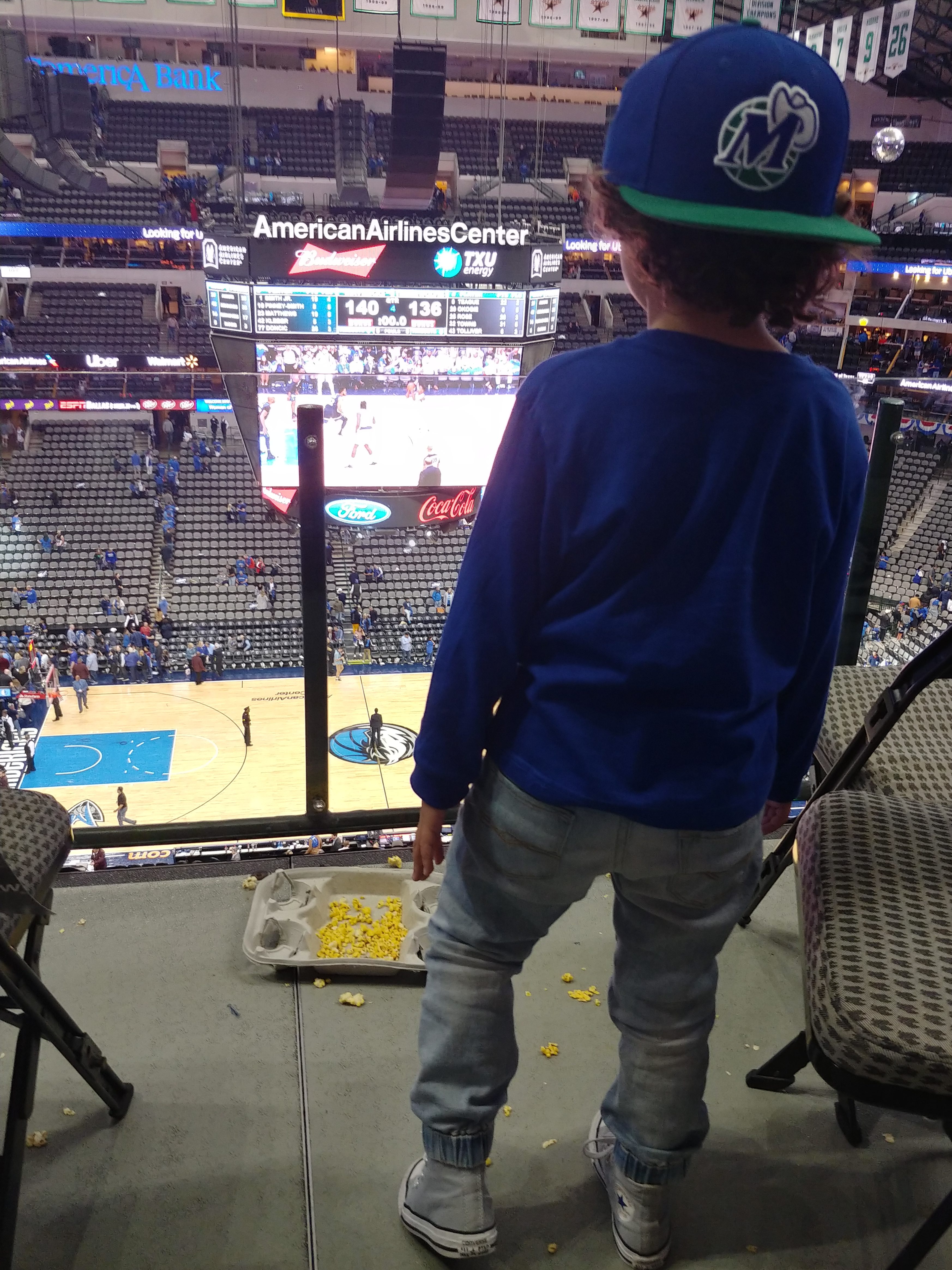 Luka’s first game in Big D: through the eyes of a five-year-old MFFL

Luka’s first game in Big D: through the eyes of a five-year-old MFFL

Do you remember attending your first major sporting event?

I remember mine. It was Monday, May 29, 1989. My father excitedly informed me that we were going to see Nolan Ryan (my favorite player) vs. Cal Ripken Jr. As we found our outfield seats in old Arlington Stadium, I remember the smell of popcorn and fresh cut grass rolling over me. As I gazed across the immensity of the field, my eyes fixed on the far away home plate, I wondered, “How can a man hit a ball this far?” It just didn’t seem real.

But there it all was; massive and loud and crackling with energy. We didn’t have the best seats, but I didn’t care, I was with my dad and what we were sharing, was magic. Pure magic. We cheered all 10 strike outs “The Ryan Express” dealt out. To me, it was a taste of heaven. That night left me with an unfading memory of the time I saw a living legend while holding my father’s hand.

Wind the clock forward almost three decades and the roles have changed. Now I am a father to a son. Now I am the one responsible for taking him to his first big game. Helping him to experience new sights and sounds and to celebrate the displays of athletic wonder. And just maybe, form our own lasting memory.

Saturday, October 20th 2018, I took my five-year-old to his first ever sporting event. I know it may sound corny to some, but if Luka ends up being to my son, what Dirk has been to me, I wanted my boy to remember that he was there for Luka’s first home game. And that his daddy was beside him.

At first, he was most excited about the promise of cotton candy and popcorn, but as we found out seats, he began to be taken by how BIG it all was. This was something special.

“Daddy, our Mavs are in the white clothes?”

“Yes, Knox, they are called jerseys.”

“Daddy, who are the bad guys?”

I hold back a chuckle, “They are called the Timberwolves”….*he whispers to himself* “The Werewolves.” I smile.

The game started like a horror movie as the Mavs coughed up a brutal 46 points in the first quarter. But this night wasn’t destined to be a horror story, instead, we were about to witness a classic hero’s journey!

Our beloved Mavs had taken a serious punch, but they would prove to have more than enough fight in them to get back in this game.

This night Luka was everything we could have dared to hope for. Clever passing, timely rebounding, and crafty shot making from all three levels. Doncic drills a step back three and the AAC erupts. “That was a good one, huh, daddy?!” my son, Knox asks me. “Yeah bud, that was a really good one!”

With less than three minutes in the 4th, Luka hits back to back baseline leaners over D-Rose and my little MFFL lifts his hand for a high five; I enthusiastically oblige. In the closing seconds of this back and forth affair, Dennis delivers with a clutch step back and-one and then proceeds ice it from the free throw line.  The AAC rejoices as if all at once thousands upon thousands of hopes are being fulfilled.

A win in the second game of the season probably won’t qualify as a historically important game. But this moment with my son? This moment, I will always treasure. And I hope that someday, he will too.

Long after the horn sounds and the cheers subside, a tired little hand reaches up for mine.

Our seats weren’t great, but he didn’t care. This was magic. Pure magic.