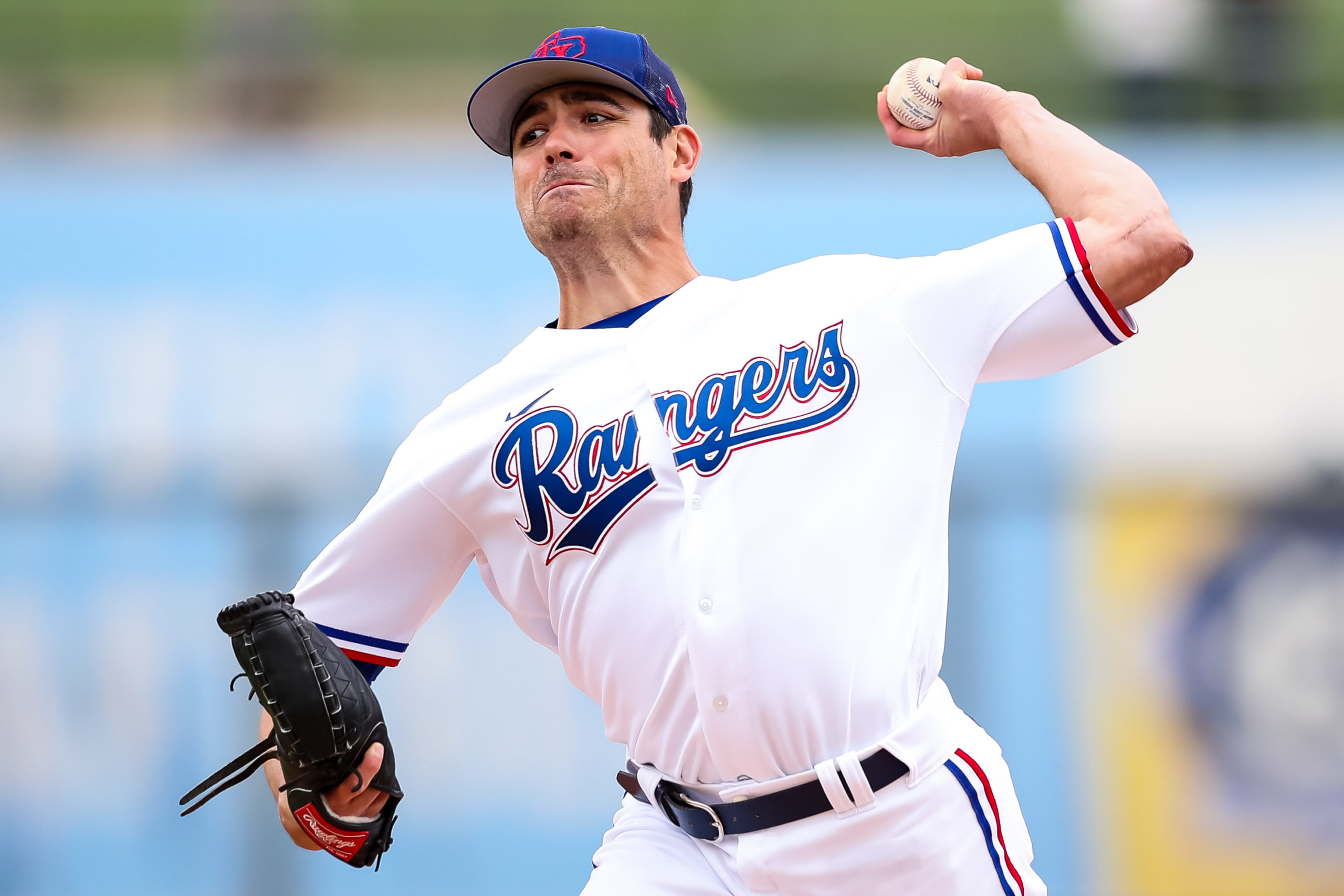 The Rangers have concluded the first month of the 2022 season. Unfortunately, the results are less than ideal. Texas finished April 7-14, putting them near the bottom of the American League standings. That’s the bad news. The good news is the Rangers enter May with momentum after a 3-1 victory over the Atlanta Braves on Saturday that featured a dominant start by Dane Dunning. While a lot looked bleak in April, there were positive outlooks during the season’s first three weeks. Let’s take a look at the Rangers April awards.

Player of the Month: Nathaniel Lowe

I had a difficult time debating between Lowe and Jonah Heim. Jonah’s April had him at an OPS over 1.000, a SLUG of .600, and an OBP of .444. However, Heim had fifty-two at-bats fewer than Nathaniel Lowe, and the numbers are not too far apart. Yes, that’s somewhat unfair to Heim, but the backup catcher role is one he’s used to and embraces. “I’m here to help the team win no matter what I can do,” Heim said. “If that’s coming off the bench in the ninth to catch three outs, [or] if that’s hitting a couple of doubles. Anything I can do to help the team win.”

As for Lowe, it’s the second straight April he’s put up respectable numbers. Nathaniel hit at the top of the lineup on Saturday for the first time. Lowe finished the month with a .313 average, .368 OBP, and.768 OPS. He was the most consistent hitter in the Rangers lineup for the first three weeks. He also gives autographs to teammates.

Play of the Month: Adolis Garcia Saves the Game (April 21 at SEA)

Adolis García is known to make dazzling plays, but what he did on April 21st saved a lot of turmoil in the Rangers clubhouse. Texas took the lead late, and in the ninth, García made a near-impossible catch and took away a double from Seattle’s Julio Rodríguez. Texas was on a five-game losing streak, nothing was going right, and if Rodríguez reached, Seattle would tie the game up. We’ll never know to this day, but I felt like Adolis’ catch kick-started a stretch that included four wins in five days.

Pitcher of the Month: Matt Moore

It’s another tough category to choose. Since the Triple-A recall, Glenn Otto has pitched two good starts, and Dane Dunning had the best Rangers start Saturday. Brock Burke ties Michael King of the Yankees for most strikeouts by a reliever (20). I went with Matt Moore because he’s been one difficult pitcher to handle if you take a keen eye on him. Oppositions are hitting .143 against him (Second on the team behind Garrett Richards). He’s second on the team in strikeouts behind Burke, he’s tied for the third-most innings behind Burke and John King, and he’s only allowed one run (Dennis Santana has allowed only one run). “I’ve been able to throw my breaking ball in the zone,” Matt Moore told me about what is working for him. “It’s had improvements with a little bit of an adjustment in Spring Training.”

Moore talked about adjusting from a starter role to a relief role. “You can pitch every single day, or just about,” Matt said. “Makes you feel more a part of the team as opposed to thirty starts. I enjoy that part of being in the bullpen.” It’s a bullpen group that saw ups and downs in April.

Game of the Month: at Seattle (April 21 at SEA)

You can view the full recap here.

On Jackie Robinson Day, Opal Lee threw out the first pitch to Tony Beasley. The pitch was fantastic first off, but after she threw it, she talked about how far as a society we’ve come compared to decades ago. It’s wonderful that Juneteenth became an observed holiday and the best part of the interview came at the end. A reporter asked Opal what it meant to throw out the first pitch on Jackie Robinson Day. Her response was epic:

Opal Lee wins today, when asked what it meant to her to throw out the first pitch on #JackieRobinsonDay

“I could do a holy dance, but the children tell me when I do that, I’m ‘twerking’”#StraightUpTX

Cowboy Hat of the Month – Glenn Otto (April 22 at OAK)

There are some good Cowboy Hat looks (though six different guys wore the hat). Brad Miller got two separate stints, putting him in the lead, but the best look came from Texas native Glenn Otto. Dane Dunning came close because Dane is the type to wear jeans, flannel, a belt buckle, and top it all off with a Cowboy Hat, but the Texas native takes the Cowboy Hat crown in April.

As someone who has a sibling, to get the chance to interview them on television and support them while they’re on the mound for a home opener is like a movie script. Robyn Hearn works for KAUZ, a CBS affiliate in Wichita Falls, Texas. She covered the Rangers’ home opener, and surprise, Taylor Hearn started the game against the Rockies. While the start on that Monday was short and so-so, after the game, Robyn was able to get her questions in, prompting Taylor with a heartfelt response that even started to water some of my eyes. The moment is shared across social media, making it a moment “bigger than the game.” I could tell the look of excitement throughout the afternoon on Robyn’s face, which I’m sure in-game filled with nerves.

Joe Maddon does what Joe Maddon does. Rangers fans remember the 2008 occurrence walking Josh Hamilton with the bases loaded to get to Marlon Byrd. However, that came in the ninth inning. Maddon decided in the fourth inning to walk Corey Seager with the bases loaded back on April 15th. The Rangers scored two more runs after that, including a balk, but the Angels won 9-6, so I guess it worked in Joe’s favor?

Call of the Month: Slide Rule to end the Home Opener (April 11 vs. COL)

The Rangers tied the game up on a Willie Calhoun home run with two outs and forced extra innings. Mitch Garver is the runner at first base at the bottom of the tenth. He heads to second, but Rockies manager Bud Black challenges that Garver violated the slide rule. New York decides Black is correct and decides it’s the call to end the game. So the Rangers’ chance to tie it up in the tenth is gone, and the Rockies beat Texas on the Rangers’ home opener. Texas had an instance in Oakland where the path to the plate was violated and won that challenge, so I guess we’re at a point where replay changes games entirely now.

Here’s the final play of the game. #Rockies #Rangers #StraightUpTX.

Here’s a tip, don’t bet with Nathaniel Lowe. Well, Brad Miller bet Lowe to hit a home run, and if Nathaniel did (the bet happened on Friday, April 22), Brad Miller had to wear jeans during batting practice. It was the same jeans that Lowe wore in the clubhouse that day, and according to Lowe, no one washed them. Unfortunately, the traveling jeans won’t be a thing. That night, the Rangers offense mustered three hits off Astros’ starter, Jake Odorizzi, and Brad Miller was 0 for 4 with a strikeout. All I hope is that those jeans found a home in the washer.