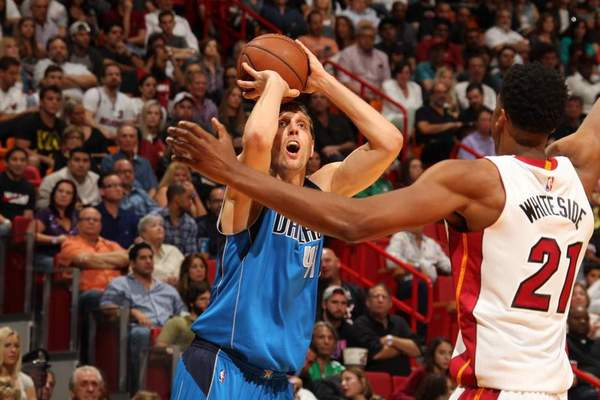 Mavericks Aim To Put Out The Heat, Look For 4th Straight Win

Mavericks Aim To Put Out The Heat, Look For 4th Straight Win

The Dallas Mavericks are riding a three-game win streak and man does it feel good to say that. Coming off a last second win against the Chicago Bulls, the Mavericks (14-27) are looking to carry that momentum into South Beach as they take on the Miami Heat Thursday night.

Before we continue, let’s flashback to Tuesday night as Wesley Matthews had his bag of arrows ready.

Wesley Mathews nails a three with 11.7 seconds left to lift the Mavs over Bulls 99-98.

This team has the core to win basketball games, it’s all about execution and having that WILL to win like we all witnessed against the Bulls (21-22).

Thursday night will be the first game of the second half of the season as the Mavs take on the 12-30 Heat. Miami is coming off a surprising win against the Houston Rockets on Tuesday night (Rockets swept the Mavs this season) but before that win they lost four straight and ten of their last 11 games.

Since defeating the Heat in the 2011 NBA Finals, Miami has had it out for the Mavericks, winning nine of the past 10 meetings. It will be up to the Mavericks to ride their momentum and not play down to the lesser opponent. This is a game that should easily be won by Dallas but we see time and time again, allowing a bad opponent get the better of them.

During this three-game win streak, Rick Carlisle has made changes to the lineup by going smaller and it has WORKED! With Seth Curry at point, Matthews and Deron Williams at guard and Harrison Barnes at power forward, he has now surrounded Dirk Nowitzki with shooters while playing at center.

I expect this lineup to work extremely well against Miami, especially with Hassan Whiteside at center. If Nowitzki is on target, expect him to score a new season-high with Whiteside not able to stray too far from the basket. If Whiteside goes for 20+ points and rebounds, it could be trouble for the Mavericks.