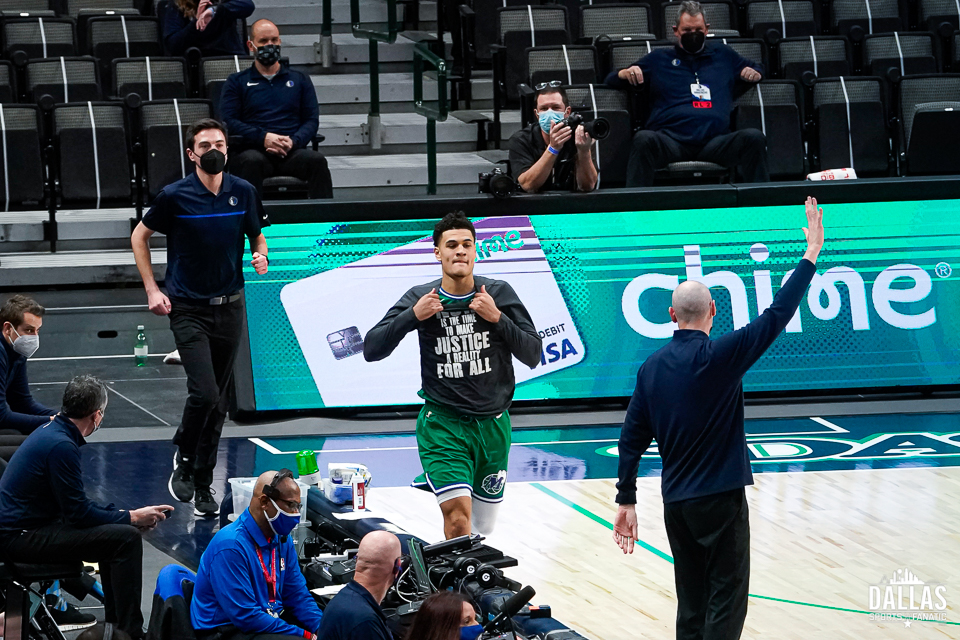 The Mavericks announced on Wednesday that they are “flex-assigning” 2020 first round draft pick Josh Green to the Salt Lake City Stars in the G-League bubble in Orlando, FL.

There was plenty of excitement about Green’s ability to step right into a major NBA role out of the gate in his rookie season. Through his first 17 career games, the results suggest that might have been a bit overstated. I’d summarize Green’s biggest NBA skills at the moment as the following:

Considering that those are like how you’d try to praise one of the worst players on your kid’s third grade basketball team, that’s not a good indictment on just how “ready” Josh Green might be for a consistent role on an NBA roster.

The 20-year-old didn’t ever appear to be a BAD player in my eyes when he was regularly playing in the month of January.  As previously stated, his energy and effort was always very noticeable on the defensive end. He seemed to never be the cause of a defensive breakdown since he stayed with his man well. He just brought so little to the table on offense besides an occasional nice cut to the basket that led to an easy bucket. He only attempted 12 three pointers in 17 games, making just two, so he was far from aggressive on the offensive end while on the court. Considering he is expected to eventually be one of the “3-and-D” guys that is so coveted around the league, he has to find the confidence in his perimeter shot.

Another thing working against him, the Mavericks are in win-now mode and their poor start to the season likely eliminated any time for “developing” young players with rotational minutes throughout the course of a game. With the last couple of weeks being incredibly vital to the Mavericks being able to overcome their 8-13 start, Green has been a “DNP-CD” in nine of the team’s last twelve games. With the team now at 13-15 and still battling to get back to where they expected to be, nothing was going to change Green’s spot in the rotation besides an injury to someone in front of him.

It’s especially frustrating for Mavs fans to see Saddiq Bey, the #19 pick of the draft just after Green, averaging 9.1 PPG while shooting over 42% from deep and winning last week’s Eastern Conference Player of the Week for the Detroit Pistons. Or the next two picks after that in Precious Achiuwa and and Tyrese Maxey both comfortably playing rotational minutes for their respective teams.

It’s understandable to be disappointed with Green’s slow start in today’s age of “Show me something now, now, NOW!” It’s also very true that the Mavericks could have greatly used better performances from Green during the month of January while their roster was ravaged by role players being in COVID protocols. However, he’s still just 20 years old. There was never anything about his college career that indicated he was on the way to NBA superstardom, so he is still very capable of developing into an important piece for the Mavs over the next several seasons.

As they’ve shown with the development of Dorian Finney-Smith and Maxi Kleber, players can show up in Dallas as guys who aren’t quite “there” yet, but can eventually become very solid pieces of an NBA within a year or two.

Green definitely seems to have a similar attitude to those two now-veteran Mavericks and will certainly work as hard as it takes to improve his game to where it needs to be to succeed. This temporary trip to Orlando will only help him in his hopefully long NBA journey.