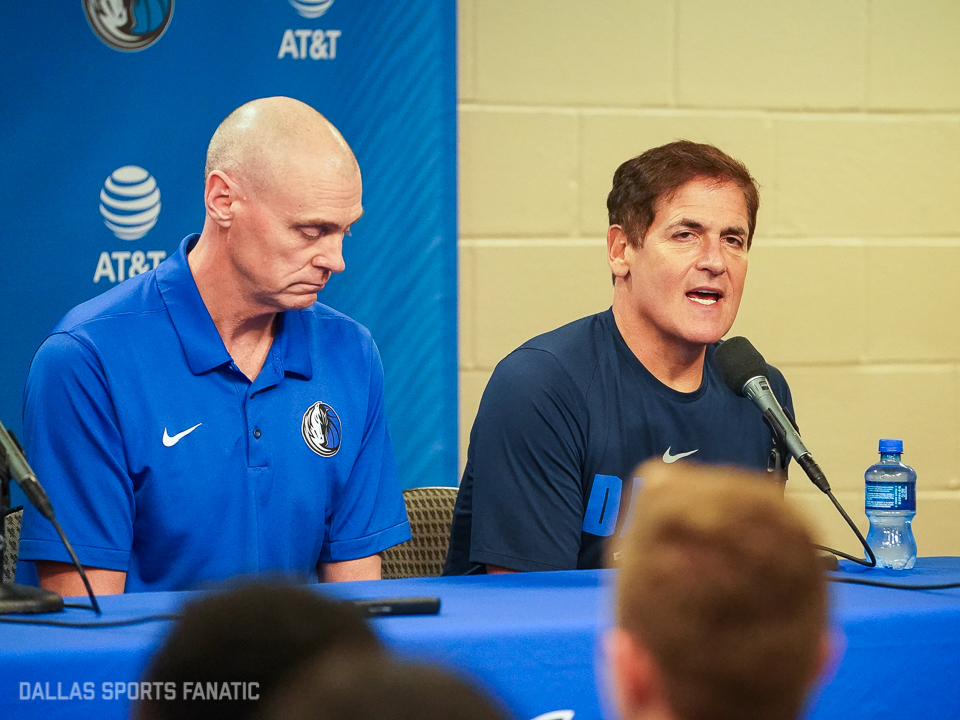 Mavericks have plenty of options in Wednesday’s draft; what is the right way to go?

Mavericks have plenty of options in Wednesday’s draft; what is the right way to go?

After not having a first round pick in last year’s draft due to that selection being included in the Kristaps Porzingis trade, the Mavericks are back in draft mode this season with two very interesting positions in a mysterious draft. At picks number 18 and 31, Dallas can basically view itself as having two first round picks. An alternate option is to hope that another team could view both of these selections as first round picks they could acquire in a trade.

It really will be fascinating to see how the Mavericks handle this draft, because with just a few days to go, there aren’t any sure-fire signs as to which way they’re going to go.

As a team coming off its first playoff appearance in four years thanks to the emergence of its two superstar players in Luka Doncic and Kristaps Porzingis, it has certainly been hinted that the Mavericks are in “win-now” mode and open to just about any move that could further their status as a contender in the loaded Western Conference.

Does a team looking to compete for a title as soon as possible want to add two rookies that might not be ready to be valued members of an NBA rotation right away? Do these picks have enough value to be a part of a package that nets the Mavericks a proven veteran player that could immediately be inserted into their starting lineup? Could they possibly find a way to just kick their draft cans down the road to next year when they don’t have a first round pick but might need the low-cost roster spots filled whenever they’re readying for a pursuit of Giannis Antetokounmpo in free agency?

What do the Mavericks fans want the team to do with the picks?

What do you want the Mavs to do with picks 18 and 31 in this Wednesday's draft?

So many questions, so little answers as of now. Let’s explore the pros and cons of each option.

Keeping the picks and drafting at 18 and 31

Pros: It’s just a fact that the cheapest way to acquire a superstar is to draft them and develop them.  The Mavericks have one of the top ten players in the NBA in Luka Doncic and his salary for the next two seasons combined (roughly $18.3 million) is less than what Tim Hardaway Jr. will make this season if he opts into his $19 million player option. According to RealGM, the 18th pick in this year’s draft will these salaries over the course of the first three seasons of their contract:

Just like in baseball or football, having major contributors on your team on their rookie contract or before they’re able to hit free agency is a mega jackpot for team-building. Luka still being on his rookie contract will be the only reason the Mavericks think they have a chance at The Greek Freak next summer. You have an MVP candidate and he’s only taking up a small percentage of your cap sheet.

While it’s unlikely that they’re finding Michael Jordan at pick 18 in this year’s draft, they could find someone who conceivably slides into being their third or fourth best player right away if they do their homework. It’s far from a lock considering the uncertainty surrounding this year’s draft class, but it’s not an impossibility.

Cons: Who the hell knows what these players could actually turn into. Here is how picks 18 and 31 have gone in the last five drafts:

There are a few respectable role players there. A couple of people who I admittedly don’t know. Of course there were quality players and even some stars surrounding each of those guys in their spots in each draft. But that’s the thing about the NBA draft: it’s crap shoot after a certain point each and every season.

For every time you find a Kawhi Leonard with the 15th pick in 2011, you have Moe Harkless at pick 15 in 2012. No disrespect to Moe Harkless and the solid role he’s carved out for himself throughout his NBA career, but yeah… he’s not Kawhi Leonard.

The Mavericks aren’t expecting to land someone of Kawhi’s caliber with the 18th pick or even if they include it in a trade package, but they’re definitely looking to improve their roster right now. The track record of unpredictability of where they are in the draft order makes it hard to be too excited about whoever they might select being ready to contribute when the regular season begins next month.

Pro: It could be a move that takes this team to the next level. There are a number of names who have been brought up as potential trade targets for the Mavs: Victor Oladipo and Zach LaVine quickly come to mind as the seemingly most realistic targets with the assets the Mavericks have.

LaVine is a more polarizing option as he has virtually been a “good stats, bad team” guy through his first six NBA seasons. Some might even question whether his stats are even “good” with some concern about his efficiency and defensive abilities. Without a doubt, he’d be an upgrade over Tim Hardaway Jr. in terms of sheer talent.

Con: Any of these players would be a major gamble that could be off the team in a year or two. LaVine is under contract through 2022 at $19.5 million for this season and next. Oladipo will be entering his final season before free agency next summer. If the Mavericks give up draft picks or role players who could be under contract for several years for a one-year rental who doesn’t work out as expected, it would be a very tough blow to this team’s perceived title window.

Everyone one can act like that window is infinitely open because of the 21-year-old Doncic and the 25-year-old Porzingis, but we’re seeing more and more each year that the NBA is a year-to-year proposition. There isn’t one team in the league that you can just bank on being great three years from now due to roster volatility and the ever-changing whims of star players across the thirty teams.

I’ll say again that I don’t think there’s a “right” answer for the Mavericks to go with here. If it were me, I’d probably use pick 18 and see if I can turn pick 31 into multiple second round picks down the line. I want to roll the dice on a younger player that could become a major contributor on the team while making a small amount of money for several years, but I don’t need two of those guys while my team is trying to legitimately trying to win a championship this season.

Someone like TCU’s Desmond Bane comes to mind as an NBA-ready prospect who can fill a spot in the Mavericks rotation as a 3-and-D guy. Despite the local ties, someone like R.J. Hampton doesn’t make sense for Dallas because all of the work he’s perceived to need due to his iffy jump shot.

With only about 72 hours before the draft, I’m sure we’re in for a roller coaster ride of speculation and rumors before the final decisions are made.