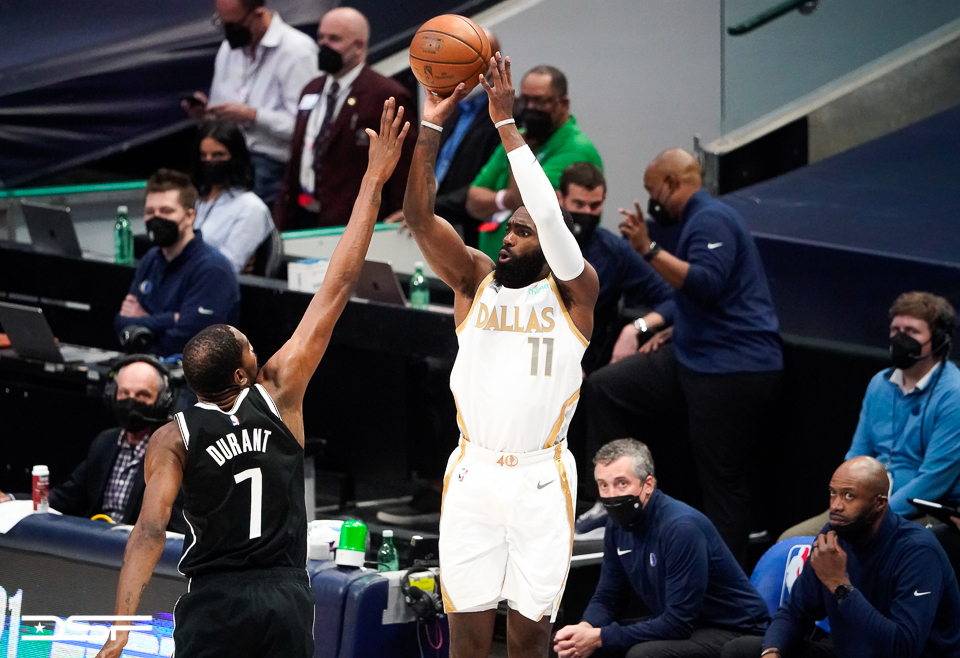 Mavericks hold on to force fourth-straight loss for Irving, Nets

Mavericks hold on to force fourth-straight loss for Irving, Nets

The Dallas Mavericks held on down the stretch to give the high-powered Brooklyn Nets their fourth-straight loss, 113-109.

Luka Doncic led the way for the Mavericks with 24 points, 10 rebounds, and 8 assists. Tim Hardaway Jr. continued his hot streak, scoring 23 points and grabbing 6 rebounds on 4-of-8 shooting from downtown.

The Mavericks dodged a bullet at the start of the second half as their hot start in the first 24 minutes did not immediately translate to the third quarter, getting off to a very rough start offensively. And if it weren’t for a slow night for Kevin Durant, the Mavericks would’ve been in some serious trouble.

The story of the night for Dallas was the defense played on Kevin Durant, which was headed by Dorian Finney-Smith. Durant scored 20 points on just 7-of-21 shooting from the field and 0-of-4 from three. Finney-Smith’s length and physicality proved to be a problem for Durant tonight which truly saved the game for the Mavericks as Durant’s counter-part, Kyrie Irving, scored a season-high 45 points and had his way with Dallas all night long.

On the offensive end for DFS, he scored 17 points on 6-of-11 shooting and 3-of-6 from three while grabbing 8 rebounds and 3 assists. Finney-Smith’s emergence on the offensive end over the last few weeks as his shot has began to fall at an extremely high clip has been crucial for the Mavericks and will continue to be so as the playoffs approach.

Dallas, once again, saw great production off the bench from Dwight Powell, who like Finney-Smith, has found himself as of late. Powell finished the night with 12 points, 10 rebounds, and 5 assists in 27 minutes. A rejuvenated Dwight Powell looking himself prior to the Achilles injury last season would do huge things for the Mavericks’ depth in the postseason.

With tonight’s victory, the Mavericks built on their lead in the 5th seed of the Western Conference, as they lead the Los Angeles Lakers by .5 a game.

Dallas take on the Cleveland Cavaliers tomorrow in the second night of their back-to-back.