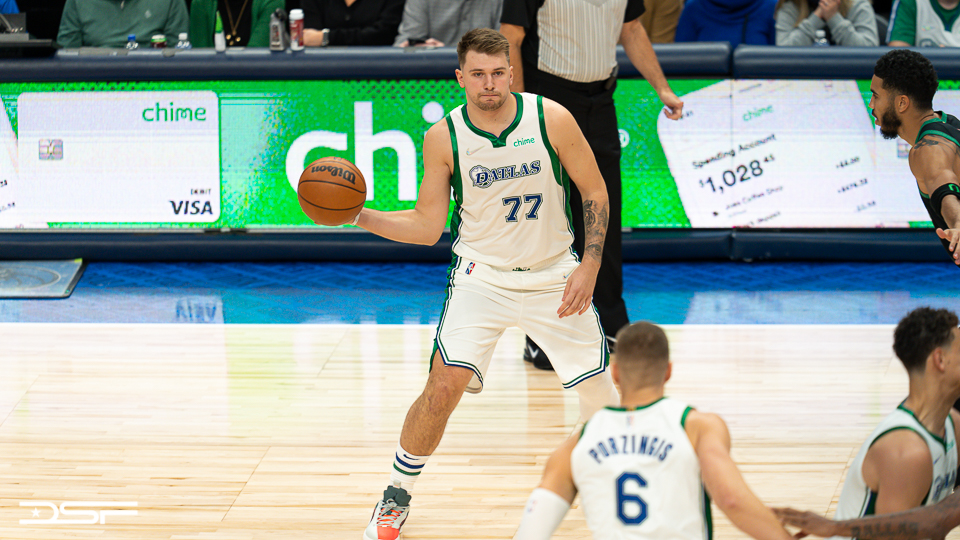 Mavericks Midseason Awards: Who is helping Luka the most as the team looks to recover from slow start?

Mavericks Midseason Awards: Who is helping Luka the most as the team looks to recover from slow start?

After Wednesday night’s game in New York against the Knicks, the Mavericks will officially be at the halfway point in their season. Their current hot streak has pushed them back over the .500 mark, but being on pace for around 44-46 wins is not what this team expected entering the season.

Despite the slow start, the team’s recent play has them at 22-18 and fifth in the Western Conference standings and still in a position to do exactly what they wanted to do heading into the season if this winning streak proves to be more of the norm going forward. While there are still plenty of big questions to be answered over the course of the second 41 games on the schedule, now is the time to honor (or call out) some performances from the first half of the season.

Yes, it’s become the “wired” thing to hype up Jalen Brunson as this team’s most important player, but the “tired” move is still the right move: This team sinks or swims under the direction of Luka Doncic.

After a November 15th home win over the Nuggets, Dallas was 9-4 despite there being very little explanation for how they were able to get to that record. Doncic sprained his ankle in the final 30 seconds of the Nuggets win and this started a stretch, that’s possibly still going, where the lingering effects of the injury have limited him to just 12 games since then.

Even with the rest of the league dealing with the same undesirable circumstances thanks to the Omicron COVID variant tearing through the country, the Mavs’ play from November 17th through December 29th was very uninspiring and concerning. Dallas played 21 games during this stretch and compiled a 7-14 record. How many games did Doncic play over that time? Just eight. While their record with him in that stretch (3-5) wasn’t exactly  dominant, it is still better than how they fared without him in that stretch and overall this season (6-9).

Despite Doncic’s play being below the standard he has set over his past two All-NBA level seasons, he is still the most dependable player on the roster and will be the key to this team reaching its potential.

I would expect Doncic to be more efficient with his shooting and to protect the ball more in the second half of the season with the slow return to form from other players on the roster.

This is the proper place to show the love to Jalen Brunson. The free agent-to-be is averaging career highs in minutes, points, rebounds and assists per game and is doing it in ways that absolutely sell you with more than just the stat sheet. His development as a one-on-one type of scorer has been absolutely astounding as he can kill defenders with a mid-range pull up or body his way towards the basket like he did to Zach LaVine on Sunday night.

Crafty play from Jalen Brunson. Keeps dribble alive after Bulls try to make him see two deep on the drive, then he waits for empty corner on the retreat dribble.

His explosive change of pace gave him an advantage and he capitalized with the hard bump on LaVine to finish off two. pic.twitter.com/vXB9kc1ZGO

It should still be a really major consideration over the next month that Brunson is the Mavericks’ player that will be most coveted by other teams ahead of the trade deadline. If there is a move for Dallas to acquire a top-level starter/fringe All-Star, Brunson would certainly be the main piece heading the other way in a deal with the lack of first round picks available for new GM Nico Harrison. If Brunson remains on the roster through the end of the season, him continuing to develop confidence and a rhythm playing alongside Luka Doncic will certainly boost Dallas in ways they might not have anticipated.

The Mavericks made re-signing Hardaway Jr. their top priority on night one of free agency last summer, rewarding the veteran with a four year, $74 million deal. With the new deal and a new coach in Jason Kidd, Hardaway Jr. was removed from his super sixth man role and placed into the starting lineup to start the season. With the new deal and a bigger role, THJ has not rewarded the Mavs through the first half of this season.

While he’s playing more minutes per game than he ever has in Dallas (30.1), he is shooting the worst he has during his time in Dallas with 39/33/74 splits. Compared to just last season, Hardaway Jr. had 45/39/82 splits. The dip has been incredibly noticeable, perhaps due to the rest of the Dallas roster being so cold from outside for most of the first half of the season. Some of the Mavericks’ biggest issues this season have simply been not hitting shots from the outside and Hardaway Jr. is the figure whose impact in the area is felt the most due to the volume and lack of other ways he is regularly able to contribute.

His career splits suggest that he typically does slightly improve his shooting in the second half of the season compared to the first — 42/35/80 splits pre-ASB vs. 44/37/83 post-ASB — but the difference isn’t remarkable or anything.

The best version of Dallas in the past has typically been where Hardaway is scorching hot from the outside. However, the recent success of the 2021-2022 Mavericks team has been their defense. Can Hardaway be a part of that?

MOST IMPORTANT PLAYER OF THE SECOND HALF: Kristaps Porzingis
Runner up: Luka Doncic

Kristaps Porzingis  is once again not providing as much availability as the Mavericks need him to provide this season. There have been some tough circumstances like the current trip to health and safety protocols that has kept him out of the lineup for the last six games (including tonight’s game in New York). However, Porzingis is on track to play in about 50 games this season if the second half plays out like this first half has. Short of him being in prime physical condition and balling out in the postseason, it’s going to be impossible for Dallas to ever get a strong gauge of what kind of team they truly are with a KP/Doncic combo if they always share the floor for only about half the possible games each season.

When he has been on the court this season, Porzingis deserves praise for his improved skills in the post and his movement and activity on defense. He deserves to be knocked for missing so many three pointers and often so many of them being wide open. The big man is shooting a career-low 28% on three’s on 5.5 attempts per game.

The biggest question surrounding Dallas in the second half to me is can this team’s offense start getting back to what we expected it to be if Kristaps Porzingis’ post game is as much of a priority as it has been so far this season? I don’t have the stats to back this up, but the eyeball test seems to indicate that too often Mavericks possessions with both Doncic/Porzingis in the game end with a crowded paint where Porzingis is positioning himself for a post-up while Doncic is trying to get to the hoop. Is this an issue because KP is often playing with another big like Dwight Powell? Possibly. It’s certainly something Jason Kidd will have to figure out with his coaching staff over the course of the second half of the season.

Despite plenty of things to be concerned about, the Mavericks’ recent play should have everyone feeling good about their ability to go on a sizable run in the second half of the season. They seem to be figuring some things out. However, this NBA season has proven to be unpredictable and the health issues surrounding the country won’t be going away anytime soon. Only time will tell if Luka Doncic and company can finally take that next step towards legit title contention.