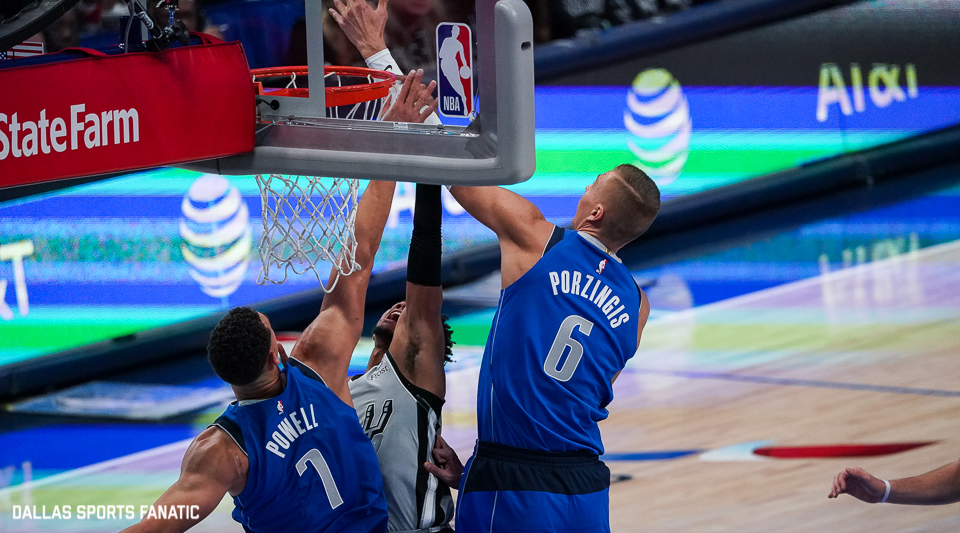 After conducting several draft week interviews with various media outlets this morning, Mavs GM/President of Basketball Operations Donnie Nelson confirmed a long-suspected possibility on Monday morning: Kristaps Porzingis will not be in uniform when the Mavericks open their regular season on December 22nd.

After surgery in October on the lateral meniscus in his right knee, Porzingis will not be ready for on-court basketball activities just two and a half months later. KP suffered the injury in game one of the Mavericks first round series with the Los Angeles Clippers back in late August, but weighed different recovery options before opting before the surgery several weeks later.

The Mavs have targeted Jan. 1 as the date that Kristaps Porzingis will be cleared for on-court activity, president of basketball operations Donnie Nelson tells ESPN. Nelson revealed on @1053thefan today that Porzingis (knee surgery) will be sidelined to start the season.

With his return not likely until a little bit after that January 1st date that ESPN’s Tim MacMahon mentioned above, it’s now time for the Mavericks to plan for life without their unicorn for the first few weeks of the season. While the news certainly could be worse, it’s definitely not the news Mavs fans wanted to hear on the day the talent in the loaded Western Conference shuffled with Chris Paul heading to Phoenix to join Devin Booker and DeAndre Ayton on an up-and-coming Suns team.

After a long list of previous injuries, including the ACL tear in his left knee that caused him to miss a year and a half, the Mavs and their medical staff are obviously approaching things cautiously with their 25-year-old star.

Circled back to Donnie Nelson about when @kporzee
will return from meniscus surgery:

"He’s going to be into the season. We’re very, very particular about bringing him back at the right time. It’s not going to be a rush. We’ve got longterm vision when it comes to his rehab."

Dallas went 11-7 without Porzingis in the 18 regular season games he missed in 2019-2020. It won’t be 18 games before Porzingis takes the court for the first time this upcoming season, but it’s at least important to know the Mavericks didn’t completely tank without him. When you have an MVP candidate like Luka Doncic, you can survive a few lingering injuries to other players throughout the course of a regular season. In the playoffs against the Los Angeles Clippers? Not so much.

Perhaps the Mavericks will be able to wait a bit on KP because they know another one of their big men will be available at the start of the season. Donnie Nelson said on 105.3 The Fan on Monday morning that he expects Dwight Powell “slowly, gradually” work his way back into the lineup right at the start of the season but that the team is “pretty optimistic that he’ll join us out of the gates.”

After suffering a terrible Achilles injury back in late January, it’s somewhat surprising that the springy Powell would already be ready in time for a December return, but no one should question the maturity and determination someone like the 29-year-old veteran would have in a rehab process.

Nelson mentioned that Powell was “absolutely the hardest worker” in the Orlando bubble even though he wasn’t playing in games. As an absolute key part of the Mavericks locker room and their offensive success, it will be great to have Powell back on the court at the start of the season.

With the draft on Wednesday and the trade moratorium being lifted on Monday morning, the NBA roller coaster ride is getting going again. While the Mavs have been quiet with any official moves so far, these injury updates are certainly going to impact how they approach team building in the coming days.