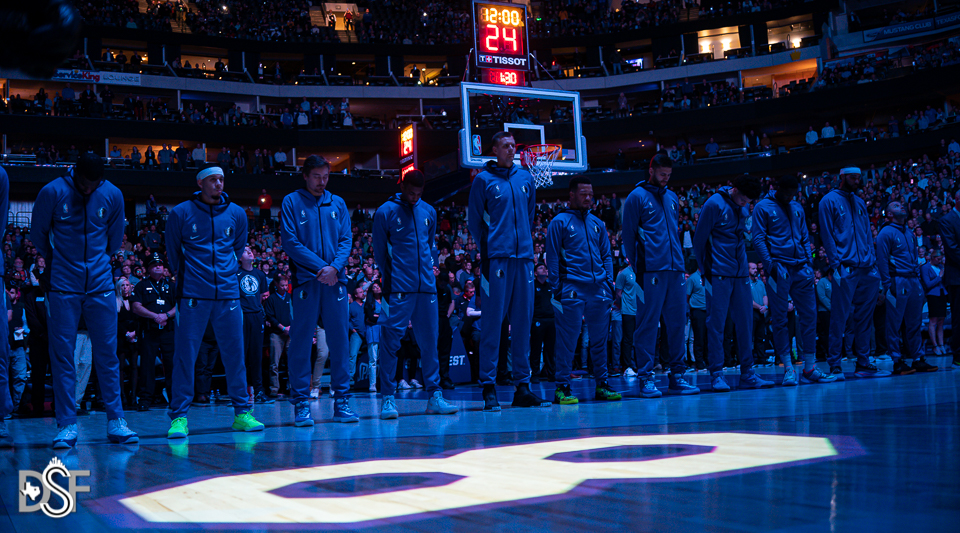 Basketball is back, folks.

Dallas won two of their three scrimmages in Orlando prior to the restart as teams looked to gain some momentum and get back into an in-season rhythm.

In this roundtable, we discussed what stood out during the scrimmages, the Mavericks’ eight game restart schedule, and predicted the playoff seedings.

1. What caught your attention from the three scrimmages? Good and bad.

Duell: Obviously, Luka getting right back to his All-NBA worthy form right out of the gate is incredible to see. The way he’s able to change his speed when handling the ball on the way to the basket has been such an open reminder of his greatness. What’s a little concerning, not majorly, is the inconsistency of virtually everyone else on the roster when looking back on all three games. Of course Seth Curry was dominant in game one against the Lakers, but he shot 2/8 from the field on Tuesday. Kristaps Porzingis looked great in the first quarter on Tuesday but obviously missed Sunday’s game against Indiana and then hardly played last Wednesday against the Lakers due to foul trouble. While others might disagree, I feel like I barely remember anything Maxi Kleber has done in the three games with him moving to the bench. I know all of these guys are capable of stepping up, but it’s just something I will be watching over the first couple of seeding games.

Konkle: The scrimmages have been a very mixed bag. Some good, some bad. As far as the positives go, I think Luka look fresh. It was very apparent how worn down he was when the season went on Hiatus, so the time off really have him the boost he needed. This team goes now where without the best version of him.

The bad, well you can start with the defense. Especially in the third quarters of the scrimmages. It feels like we have been talking about the third quarter woes forever now, and it always seems to undo a very effective first 24 minutes for them. Every flaw the Mavericks have seems to read its ugly head in those third quarters and they need to minimize that.

Mulford: Luka indeed did look to be fresh and in mid-season form. His ability to be patient and get to the basket, whether to attack himself or dish to an open teammate, was something that certainly stood out to me. Seth was literally perfect in the first scrimmage against the Lakers. His shooting in the starting lineup alongside THJ on the wing gives Luka just another weapon to utilize.

With that said, Seth being in the starting lineup along with Brunson and Powell being out, certainly hurts the Mavericks depth. There were moments in the scrimmages where the bench unit looked lost out there and couldn’t find someone to get a bucket or create offense. It’ll be interesting to see how Carlisle staggers the rotation as the restart games begin.

2. Looking at their eight-game restart schedule, how do you feel the Mavericks fair?

Duell: It’s certainly an interesting slate with a fair shake of the elite like the Bucks and Clippers and then games against teams that shouldn’t even be in the bubble like the Suns and Kings. I am very intrigued to see how ALL teams in the bubble will handle the last two or three games. Will Devin Booker even want to suit up for the Suns in the regular season finale when Phoenix is inevitably way beyond eliminated by that point? Is Giannis even playing more than 20 or 25 minutes a night when most would argue he has the MVP in the bag and the Bucks have clinched the one seed in the East? It’s also worth remembering how many times the Mavericks have lost games to inferior teams this season, so don’t take those Suns/Kings/Blazers games for granted. All that considered, I think 5-3 is a reasonable expectation.

Konkle: Going into the scrimmages I felt great about their chances. A fully-rested and healthy Luka? An already acclimated KP? Sign me up.

However, I quickly realized during these scrimmages that the absences of certain guys was going to be a real problem, namely Brunson and Powell. This team NEEDS it’s depth to be reliable and help them win games. I’m not sure they’re in a position to count on that right now and that takes away what was a huge advantage for them.

With that said, I could see them maybe just beating the teams they’re supposed to, Like Sacramento, Phoenix, and maybe Utah. But I’m not feeling great about the rest.

Mulford: It’s certainly a mixed bag of games with contending teams and teams who shouldn’t even be in Orlando to begin with. Like Dylan said, there’s definitely games you SHOULD be able to notch as a win for the Mavs but they’ve shown in the past that they sometimes play down to their opponents level and lose very winnable games.

Outside of trying to move up in the playoff standings of course, these eight games should be used for Carlisle to find a set bench rotation with guys he feels he can trust with the likes of Brunson and Powell out for the restart.

3. When the playoffs begin, where do you think the Mavs will end up seeding wise vs where you hope they end up?

Duell: My sky high hope is to move up to the 4th seed with the injuries of Bojan Bogdanovic for the Jazz and Eric Gordon on the Rockets. My expectation is that a 5-3 record like I predicted above might only allow them to tread water at the 7th seed or maybe move up one spot to 6th before the eight games are finished.

Konkle: Piggybacking off the point I just made, I bet they’re a bit too stagnant to win enough games to move up. I project they stay in the seven hole and face the Clippers, which we all agree is a nightmare matchup.

Ideally, you’d want them to move up at least one spot. Anything to avoid the Clippers and I think they’ve got a fighting chance to beat anyone. They will need to clean up a lot of this issues we’ve addressed here if that’s to be the case. However, I’m just not sure they have enough to do that. I hope I’m wrong.

Mulford: Being 1.5 games back of the Thunder and Rockets certainly leaves the door open to potentially moving up, sure. But how open is that door? Not very. The Mavericks’ chances obviously starts tonight as beating the Rockets is probably the most must-win game on their schedule if they want to have a chance to jump up in seeding.

With the Thunder, they have a tough schedule, including games against Jazz, Nuggets, Lakers, Heat, and Clippers but in the end, it feels like the Mavericks will stay in the 7th spot.

And though it’s always been advertised as Clippers-Mavericks, the Nuggets are only a game behind the Clippers for the 2nd spot. That August 12th game between the two teams could definitely have a lot riding on it.

If not the Clippers, I like the Mavericks chances to advance to the second round, whether that’s the Nuggets or whomever else. But with the assurgence of NBA legend Bol Bol, that could be tougher than advertised.