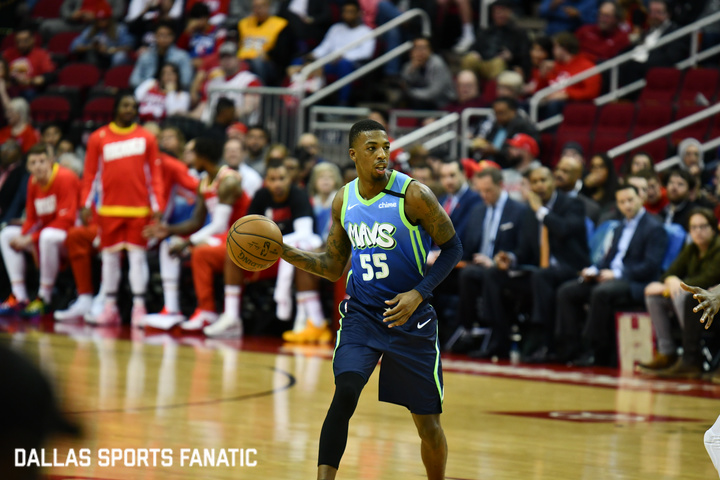 A busy week for the Mavericks continued on early Saturday morning as they sent Delon Wright and Justin Jackson out in exchange for veteran F/C James Johnson from the Oklahoma City Thunder. The deal was a part of a bigger three-team deal that included the Detroit Pistons.

One more time amid the madness so we're all clear:

Dallas gets James Johnson (from OKC)

Detroit gets Delon Wright (from Dallas)

OKC gets Trevor Ariza (from Detroit), Justin Jackson (Dallas) and draft compensation to be explained later

It took about forty minutes to sort everything out after the news initially broke after midnight on Saturday. There was even a brief five minute window where it appeared both Johnson AND Trevor Ariza were headed to Dallas, but that was corrected to just Johnson.

While this isn’t the most exciting trade in the world, it does certainly serve multiple purposes.

Moving on from both Delon Wright and Justin Jackson
Jackson, 25, spent the last season and a half in Dallas after coming over in the Harrison Barnes trade with the Kings back in February 2019. As the 15th overall pick in the 2017 draft, the Mavericks surely had slight hope that the 6’7 wing would develop into a serviceable rotation player for them considering he still had two full seasons of team control remaining when they initially acquired him. While he had flashes at the end of the 2018-2019 season when he started 11 of 29 games for the Mavs down the stretch, his play was just plain bad in 2019-2020 with him averaging a career low 16.3 minutes per game and shooting just 29% from deep, basically all the team needed him to do.

Off the court, Jackson was nothing but a positive locker room presence and one of the best supporters of his teammates. His locker was next to Dorian Finney-Smith’s and the two similarly sized wings frequently shared laughs before and after games. He was definitely one of the more friendly players to the media and always went to “chapel” before each and every home game. Irrelevant to his on court production, but it makes you a little more sympathetic for his shortcomings.

Wright, 28, came to Dallas last summer after signing a three-year/$27 million contract following a strong spring showing with the Grizzlies while playing a more featured role than he did over his first few seasons in Toronto. He never quite found any sort of cemented role in his one season in Dallas. He certainly had the size to be a very valuable perimeter defender next to Luka Doncic, but he never seemed to be quite comfortable playing along the star who needed the ball in his hands more on offense. This led to his minutes more or less fluctuating between 15 to 22 per night and he just wasn’t able to make major impacts in those short bursts. Ultimately, Wright received a “did not play – coach’s decision” in two of the Mavs six playoff games. Not ideal for a guy making over $9 million.

In the locker room, Wright was a tough nut to crack. He often sat at his locker for long stretches before games but with air pods in, giving mixed signals as to whether or not he wanted to talk to media or even teammates. He was pleasant enough when he did speak, but he was never one to give insightful answers or even speak with the enthusiasm that Jackson would while discussing his limited playing time.

Ultimately, these two just didn’t have a role going forward for the Mavericks. Jackson for not being able to play well enough to maintain one and Wright for not being adaptable enough to create one for himself despite having the tools to be a key rotation piece. Hopefully Jackson will find some minutes on a young Oklahoma City squad and Wright can find some footing on a Pistons team that is signing a ton of big men this weekend.

Gaining “an enforcer” in James Johnson
After Marcus Morris and Montrezl Harrell pushed and yapped at the Mavs for six games in the playoffs, it became clear that Dallas needed to add their own version of that this offseason. Their young superstar, Luka Doncic, is frankly a target for a variety of reasons. While Luka is more than capable of sticking up for himself, you need backup from your teammates.

Johnson, 33, is certainly capable of filling that role. Just do the right search on YouTube and there are plenty of clips of him getting into scrums and sticking up for teammates after an opponent dishes out a hard foul. What does he have left on the court? Tough to say. His best days of production are certainly behind him, but he can still be a quality physical presence for Dallas’ second unit. In 14 games with a bad Timberwolves team after the trade deadline last season, Johnson did average 12 points and five rebounds while shooting 37% from deep. Very small sample size, but perhaps it was something to build upon.

Clearing up more cap space for the 2021 free agency sweepstakes
The Mavericks weren’t going to be involved in the pursuit of the very top of this year’s limited free agent class because of a lack of salary cap space. They were going to have to use their mid-level exception and get active via trades. They’ve done both things so far by acquiring Josh Richardson and James Johnson via trade and then re-signing Trey Burke using a portion of their $9.76 million mid-level exception. The acquisitions of Richardson and Johnson aren’t just good for on the court the upcoming season, they helped the Mavericks be in position to have close to $50 million in expiring contracts coming off the books next summer when they hope to be active in a free agent class that possibly includes the likes of Giannis Antetokounmpo, Kawhi Leonard and Paul George.

Here’s what the Mavercks have sent out and brought back this week in terms of salary over the next two seasons.

Also factor Boban Marjanovic and Tim Hardaway Jr.’s combined $22 million coming off the books after this season and you see Dallas’ plan coming into place. While we’ve certainly been down this road before and it led to nothing but disappointment, things are simply different this time with the like of Luka Doncic and Kristaps Porzingis in the fold heading into free agency pitches.

Even without looking beyond towards 2021 free agency, these moves have undoubtedly made the Mavericks a stronger, edgier and more versatile team for the upcoming season. While their historic offense was fun to watch, it was apparent that they needed to be able to be more gritty and play much better defense.

While they’re likely not done with their offseason yet, they’ve definitely done what they needed to do through the draft and early stages of free agency this week.