The Dallas Mavericks (42-29) have four games left in their 8-game home stand, looking forward to the intra-conference matchup against the Oklahoma City Thunder (52-18).

The Game At Hand:

Dallas has performed somewhat sluggish as of late, winning only five of nine games since the All-Star Break. Sunday night is a prime example of the Mavs’ late season struggles with a heartbreaking overtime defeat versus the Brooklyn Nets. It is important for the Mavericks to win tonight to maintain the 8th seed in the Western Conference.

As for the Thunder, this young, yet experienced team is currently holding a 2-1 record in the season series against the Mavericks. Oklahoma City has shown no signs of slowing down this season by winning six of their last seven games. With Thunder guard Russell Westbrook returning tonight (knee), the Mavs have a tough task of defending both Westbrook and Kevin Durant.

Keys To The Game:

The Mavs gameplan should be displayed short and sweet into a hashtag: “#STOPKD”. Capitalizing all the letters in this hashtag emphasizes how important it is for the Mavs to defend Kevin Durant. Durant is essentially the foundation of OKC’s offensive production. The All-Star forward has averaged 35 points per game in the last ten, shooting slightly above 50% from the field. Shawn Marion and Vince Carter have to contain and defend Durant as much possible. If Durant catches fire, this game could end on a sour note for the Mavs.

The Oklahoma City Thunder as a team are what I like to call “Run Killers”. Run Killers are teams that when the opponent starts a scoring run, the team rallies to stop that run. OKC is probably one the best teams at stopping their opponent’s runs, which is why they’ve been one of the most dominant teams in the league. After an opponent’s run, a 3-pointer from Durant, a steal and breakaway dunk by Westbrook or block by Ibaka can crush a team’s morale throughout the game. Every offensive possession is critical for the Mavs when going on scoring runs. 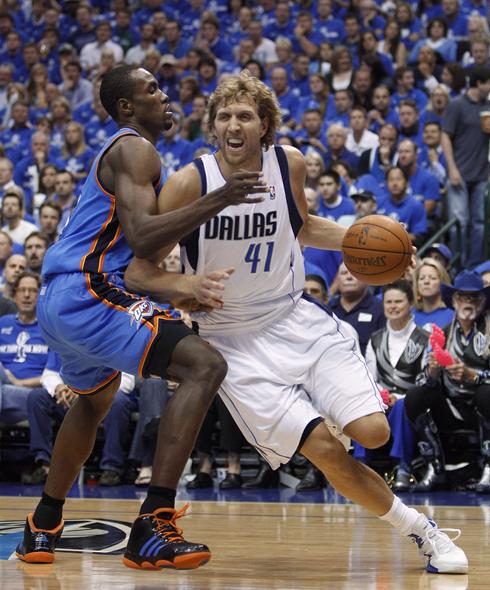 There are times where MFFLs see amazing performances from Dirk. Then there are the times (not often) where Dirk has “it’s just one of those games” type performances. Sunday night’s game against the Nets was a game that Nowtizki can forget about going forward. Dirk shot an excruciating 16% (2-12 FG), finishing the game with 10 points. Expect Dirk to have better production on the offensive end of the ball tonight.

Tip-off at American Airlines Center tonight is at 7:00 p.m. CST. The game will be broadcast on nationally on TNT.