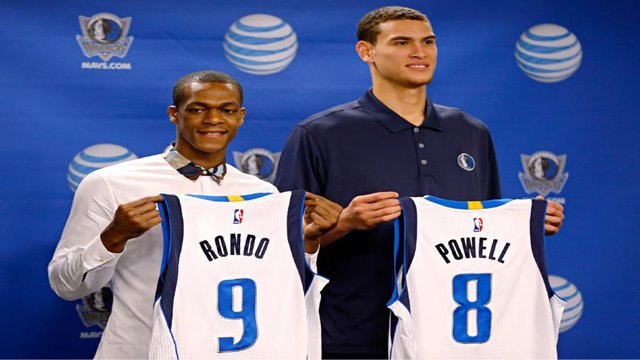 Dallas, TX–Today, the Dallas Mavericks introduced point guard Rajon Rondo along with center Dwight Powell in a press conference at the American Airlines Center. Late last night, the Mavs officially acquired Rondo and Powell from the Boston Celtics in exchange for center Brandan Wright, forward Jae Crowder, guard Jameer Nelson, a 2015 first round pick and a 2016 second round pick. The Mavs have long coveted Rondo, but have always lacked the assets to land the Kentucky product, but on Thursday afternoon the Mavs finally got their guy. Rondo arrived in Dallas this morning to take a team physical and is expected to join the Mavs on the practice court for shoot around tomorrow morning in hopes of making his Mavs’ debut tomorrow night verus the San Antonio Spurs at the AAC.

The acquisition for Rondo gives the Mavs the best, if not one of the best, starting lineups on paper, to pair with Tyson Chandler, Dirk Nowitzki, Chandler Parsons and Monta Ellis, in the league. Rondo will now help quarterback the Mavs high-power offense that’s already number one in the league in offensive efficiency (113.6). As the new backcourt leader, Rondo is seen as a pass-first guard with excellent ball handling skills and a high basketball IQ. While there are concerns about his fit alongside Ellis, Mark Cuban stressed at the press conference that Monta’s role would not change and that the guard signed off on the acquisition.

The Mavs had to pull the trigger on a guy that they believe will become a core part of their team for several years to come. A caveat to the Mavs trade agreement with the Celtics for Rondo centered around the Mavs ability to keep Rondo beyond this season. According to a report by Tim MacMahon of ESPN, the Mavs are “as confident as we can be” that they will be able to sign Rondo long term.

Mark Cuban: "We’re past the days of rent-a-player. We want [Rajon Rondo] to be here a long time." Same goes for Tyson Chandler, Monta Ellis.

On defense, Rondo would be able to utilize his lengthy wingspan (that matches that of Lebron James) and quickness to defend the Western Conference’s top backcourts that include the likes of Russell Westbrook and Steph Curry. The Mavs are viewed around the league as one of the worse perimeter defending teams, allowing opponents to shoot a league leading 39.2 percent from the three-point line. Based on his athleticism alone, Rondo can be viewed a clear upgrade over Jameer Nelson.

In addition to Rondo, the Mavs also acquired throw-in Dwight Powell (6-11, 240). Powell is a former Stanford University standout, who was drafted with 45th pick in the 2014 NBA Draft. In his final season at Stanford, Powell was named to the All-PAC-12 First Team after averaging a career high 14.0 points and 6.9 rebounds per game. In his first season in the NBA, Powell has played sparingly, averaging just 1.8 points and 1.8 rebounds in just nine total minutes played. Cuban said repeatedly during the press conference that the Mavs had long had an interest in Powell, dating back to the draft.

Rondo playing tomorrow? "After the physical, I'll be ready to go."