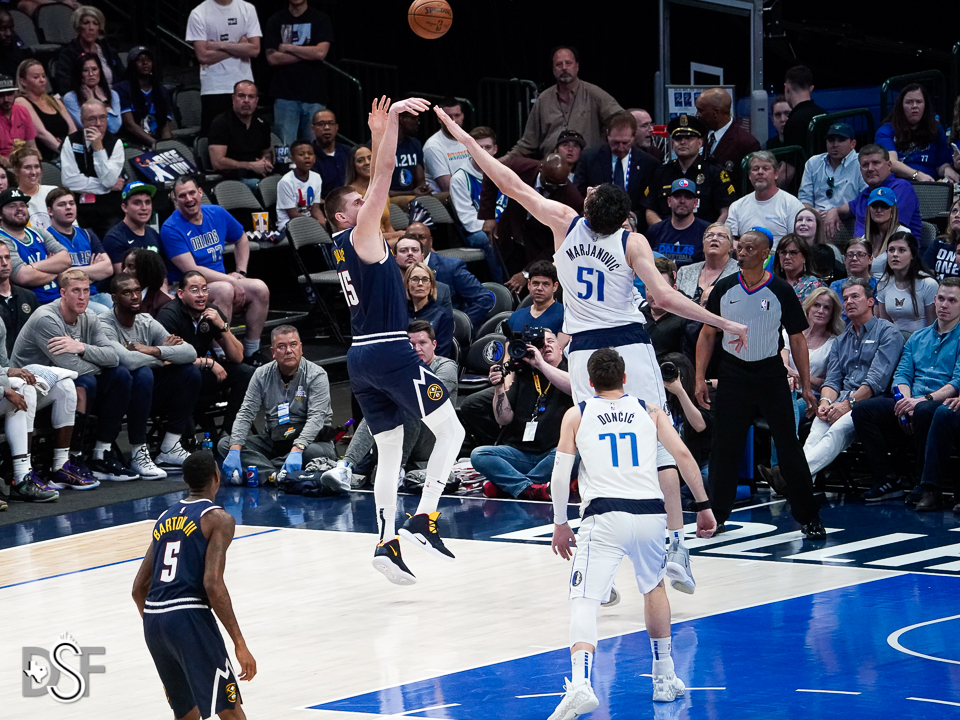 With the NBA’s planned reboot set to get underway at the end of July and the playoff plan more or less guaranteeing the 40-27 Mavericks a spot in the dance after they finish their final eight regular season games in Orlando, it’s never too early to start looking at who Luka, KP and the gang could face off against in the first round of the playoffs.

The Western Conference standings looked like this when the season was suspended back on March 11th:

Obviously the Mavericks would have been set for a first round matchup with the Clippers in the 2 vs 7 slot of the bracket if the season ended today — thankfully there are still eight more games for them to work their way out of that matchup.

Over the next couple of weeks, we’ll work our way through various potential first round opponents for the Dallas. Today’s opponent under the microscope: The Denver Nuggets.

Each of these games are pretty memorable for something significant happening in them when they’re mixed in among the 67 regular season games the Mavs had played up until March 11th. The Dallas road win in October was memorable for the fact that Luka Doncic and Kristaps Porzingis combined for 22 points on 7-29 shooting and the Mavericks still won behind the collective depth of their team with nine players scoring in double digits but no one scoring more than 14.

The January home loss was memorable for the Mavericks not being able to stop Nikola Jokic in the post on a game-winning shot for the second season in a row and then not even being able to get a shot off on their final possession when the ball was forced out of Doncic’s hands.

Of course March 11th is famous for being the night the collective NBA dookie hit the fan with the positive COVID-19 test for Jazz center Rudy Gobert. This happened early in the third quarter of the Mavs/Nuggets game and made Boban Marjanovic’s career high 31 points far from the focus on one of the most unforgettable sports nights in recent memory.

Notable factors
With all teams playing exclusively at the underwhelming courts at the Wide World of Sports Complex in Orlando, the Nuggets will lose that homecourt advantage that they have in the Mile High City. Denver had the second best home record in the West at 25-8, just a half game back of the Clippers, so it would be a relief for any team to not have to play three or four games at the raucous Pepsi Center in a postseason scenario.

The Nuggets appear to be entering the restarted season with more or less perfect health while the Mavericks will be without Dwight Powell and, as of now, Jalen Brunson.

Slow it down
The Nuggets finished the first part of the regular season as the team with second slowest pace of play in the league. Despite having a a few less possessions per game, Denver is still a top 10 team when it comes to offensive rating. So they take their time and make the most of each possession thanks to elite ball movement that finds easier baskets as they are fourth in the league in assists per game and sixth in field goal percentage. This approach has certainly baited Dallas into a different style of play when the two teams face-off as the Mavericks have scored less than their usual 116.4 points per game in all three regular season matchups with Denver so far.

Denver also shoots eleven less three point shots per game than Dallas (DAL 41.5 DEN 30.4), so the emphasis for Dallas is defending in the paint off great passes and finishes by superstar Nikola Jokic. As more or less the only team in the NBA to roll their offense through a 250 lb. big man, the Mavericks have to be ready to work on him in the post.   With lighter bigs like Porzingis and Willie Cauley-Stein and then the minutes-restricted Boban Marjanovic, this would be a major group effort by Rick Carlisle and his roster. Dallas has recent heartbreaking losses where Jokic was able to simply go to work in the post late in games on the likes of Dwight Powell last year and then the undersized Dorian Finney-Smith earlier this year.

Wings for days
The Nuggets depth on the wings is simply incredible and that might be the weakest part of the Mavericks roster. Matching the size and ability of guards and forwards like Jamal Murray, Garry Harris, Will Barton and even the cautiously used “rookie” Michael Porter Jr. will be incredibly tough for the likes of Finney-Smith, Tim Hardaway Jr. and even Luka Doncic to keep up with. Perhaps this is an ideal scenario for Michael Kidd-Gilchrist to pick up major minutes, but his output before the season halted certainly wasn’t very inspiring.

While the Mavs and Nuggets aren’t currently in position to play each other in the first round, there isn’t much that would have to happen for a matchup between them to occur in the opening round. Each of the three games this season have been close (with the exception of a late burst by the Mavericks in the fourth quarter on March 11th) and leads you to believe that this would be a long series.  It’s definitely one the Mavs could feel pretty good about winning, though, especially compared to a matchup with the Clippers.