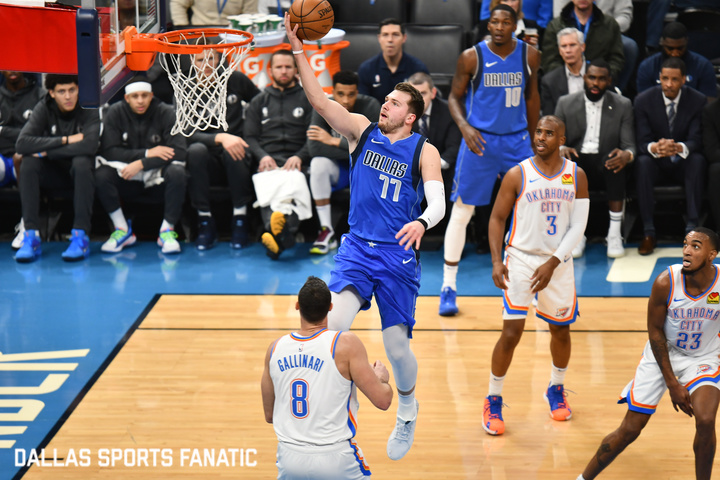 Why are they a difficult matchup:

Despite a complete roster makeover during the off-season, the Thunder found themselves sitting at 5th in the Western Conference when the season was put on hold due to COVID-19. The new faces of Chris Paul, Shai Gilgeous-Alexander, and Danilo Gallinari had the Thunder limping to a rough 8-12 start in their first 20 games, but the Thunder are a pesky bunch, just like their leader and All-Star point guard. That is what makes this team a difficult match-up for the Mavs and everyone else in the Western Conference this year. The Thunder were a team that was thrown together on the whims of the wishes of James Harden and Kawhi Leonard, and yet they still managed to find themselves in the playoffs as a team of cast-aways.

The resilience and peskiness is evident in their defense. They have tenacious on-ball defense in Chris Paul as well as length to disrupt shots with SGA and Terrance Ferguson. Their length allows them to take away good looks from the three point line as they are 5th in the NBA in opponent three point percentage and 6th in the NBA in opponent threes made per game. This does not bode well for the Mavericks, who lead the NBA in percentage of points from threes with 39% of their points coming from three pointers this season. The Mavericks have taken the second most three pointers this season and have made the most. Thunder Coach Billy Donovan surely will re-emphasize their approach to three-point defense if they are matched up against Dallas.

Shai Gilgeous-Alexander really came into his own after he was traded to the Thunder as part of the Paul George trade. His points per game averaged jumped from 10 to 19 points per game, along with increases across the board. Of course this was going to happen with more playing time and a greater role, but the sophomore has really grown before Thunder fans’ eyes this year. Dallas doesn’t have a SG/SF that can match-up one-on-one against SGA. Sure, Tim Hardaway Jr., Seth Curry, and Dorian Finney-Smith are all quality players that have their own strengths in certain areas and their individual contributions as a sum can be greater to the whole team, but none of them are matching the 19 points, 6 rebounds, 3 assists, and 1 steal that SGA is. This is a match-up that will give the Mavs problems.

Chris Paul is that nagging gnat or fly that won’t go away. You know it, I know it, anybody who watches the NBA knows it. Often times this year he has deflected the praise for this surprise team onto his other teammates, including the young guys. But that attitude that he has always carried, that bulldog mentality (that can also come off as whiny) if you will, is why the Thunder are in the playoffs today. I do not expect him to be matched up against Luka a ton due to the size difference, but we should expect to see the veteran guard hounding the new kid on the block a few times if these two teams meet. It will be interesting to see how Luka responds to playoff intensity defense from someone like Paul, as we have seen him get irritated a couple times this year.

How do the Mavericks matchup:

It is hard to say since the teams split the season series 1-1 and neither team was at full strength in either game. But, I think Dallas matches up pretty evenly with the Thunder despite the teams seeming to counter-act each other in personnel and offensive versus defensive execution. Dallas has the height advantage at guard and at the forward position with Luka and KP. But they lose the height advantage at the SG and C spots with Curry/Hardaway and most likely Maxi having to match up against SGA and Steven Adams, respectively. The Mavs fire away from the three point line with success, while OKC tries to limit good looks and is successful at it.

The way Coach Carlisle leverages pick-and-roll situations with KP/Maxi and Luka/KP will be important in this series. If the Thunder default is to guard KP with a smaller guy and Maxi with Adams, a KP/Maxi screen could allow a switch to bring Adams out of the paint. KP could drill a three over him or find someone in the open passing lane in the middle. Maxi also feasts on smaller guys so getting Adams off of him would be helpful. The Luka/KP pick and roll was starting to get going toward the end of the year, so milking that for all its worth will be especially important throughout the playoffs, no matter the opponent. Think of KP setting a screen for Luka and Chris Paul helplessly holding his hand up as KP shoots over him. *chef’s kiss*

I think Billy Donovan will put SGA on Doncic, as Chris Paul is a little too short to contain Luka. If not SGA, it will be Terrence Ferguson or any other of the Thunder wing players. This will be a fun match up as SGA and Terrence Ferguson are both long and play tough defense. However, Doncic put up 35 points in their first meeting and 29 points in their second meeting this season. Check out the clip below from the first meeting, a 107-101 loss for the Mavericks on New Years Eve. FWIW, KP did not play in this game.

Who would come out on top?:

Trying to put my bias aside, I think Dallas has the ability to come out on top. With the way that KP was starting to play before the shut down and now the time off that Luka had to heal his sore ankle and wrist, Dallas is in a great position to make a deep run. Jalen Brunson having surgery on his shoulder also opened up more minutes for Seth Curry, who was on fire and starting to thrive in his expanded role. Outing Chris Paul and this tenacious Thunder team with a defensive chip on their shoulder will be a very tough challenge. But with Luka, KP, and a creative Coach Carlisle, Dallas should be able to weather the storm.