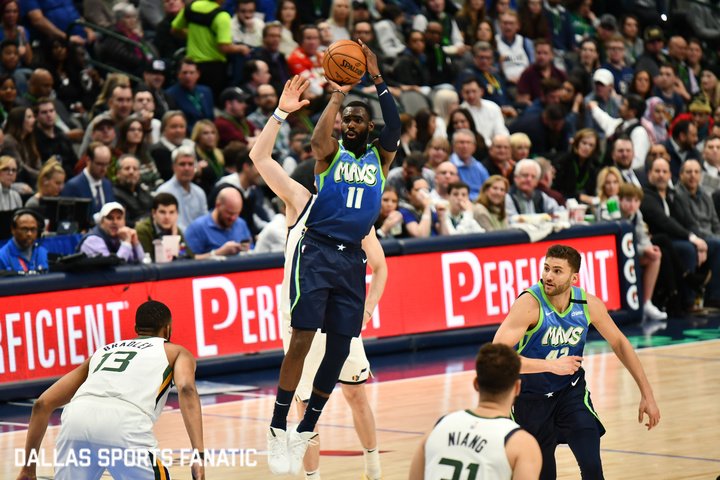 What makes them a difficult matchups: Traditionally, the Jazz have been a stout defensive team who plays at a snails pace. This year is different for them however, as they boast a top-10 rated offense in the NBA (112.1 PPP) and a defense that is lagging somewhere behind that.

They’ve done an excellent job surrounding Donovan Mitchell with shooters and Quin Snyder, always adept with offensive schemes, is finding creative ways to get those guys the ball. It’s one of the reasons we have seen the Mavericks struggle with them this season.

They’ve even turned Rudy Gobert into a viable offensive option. Not on post-ups, isos, or anything of the sort, but as a rim-runner/dive man in the middle. As followers of the Mavericks, we know what it can do for a team to have a guy in that role.

While Rudy’s offensive development has been a nice surprise, his real value obviously comes on the other end. His monster 7-foot, 9-inch wingspan paired with superb instincts gives Utah something maybe nobody else has: A player they can build their entire defense around. It’s similar to what the Mavericks have done on offense with Luka, putting players and schemes around him that accentuate his elite skillset.

Is Utah having the same success defensively they usually do? No, and Gobert likely bears some of that responsibility. But Utah’s point-preventing pedigree is very strong and they will surely fall back on it in the postseason.

How do the Mavericks matchup: Offensively, I think this is a great matchup for the Mavericks. That being said, Dallas can score effectively against a lot of teams. It’s kind of what they do.

But considering how Utah likes to scheme their defense, the presence of Kristaps Porzingis could be a game changer. The Jazz typically want everything funneled into Gobert’s waiting arms. Their close-outs are long, they are up into offensive player’s airspace, forcing them to drive past. In most cases, this works because they just pass it off to Rudy at the rim. They will surely deploy this tactic to try and slow down Luka.

But KP’s ability as a stretch big has the potential to really challenge Utah’s defensive alignment. Especially with Luka’s ability to get into the paint and dominate. Gobert can either sink into the paint and cover up all of Luka’s attacks, or stay connected to Porzingis and prevent a lot of open 3-point attempts. It’s too tough to do both. A real “pick-your-poison” scenario.

Utah also lacks a true perimeter stopper to keep Luka under control. Royce O’Neal is a nice defender, Joe Ingles is solid as well, but they don’t have anyone to match Luka’s size and skill.

Point being, I think Dallas can impose their offensive will on this team.

Utah can likely do the same. As outlined earlier, they’re pretty good at that in their own right. But they lack the degree of firepower that Dallas has, especially being without their second biggest weapon in Bojan Bogdanovic, who is out for the season.

Doncic and Mitchell have a case here, but KP and Rudy’s skillsets make this matchup so intriguing. One is a 7’3 unicorn with in-the-gym range, the other the most dominant defender in the league. Their skills add dimensions to their team that essentially nobody else has. The winner of this matchup likely determines who advances.

Who comes out on top?

This would be an incredibly fun and entertaining series. I believe there would be lots of points scored between two evenly-matched outfits.

However, I think the Mavericks supreme spacing paired with Doncic’s brilliant playmaking can break Utah’s defense. Utah certainly has the scoring punch to counter, but down Bogdanovic I just don’t see them having enough to keep pace.