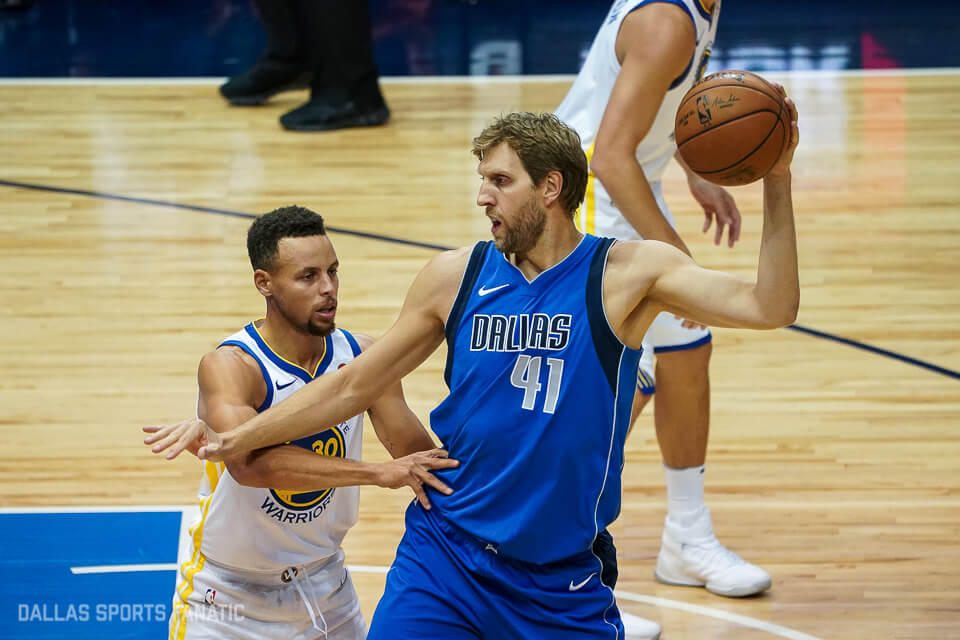 On Thursday, the Dallas Mavericks (8-20) travel to the Bay area to take on the Golden State Warriors (22-6) at Oracle Arena. Both the Mavericks and the Warriors will be nursing injuries to their star players in this season’s second match-up between the two teams. Dennis Smith Jr. will miss his fourth straight game as he is listed as out due to an ailing groin. Stephen Curry suffered a nasty sprain to his right ankle on December 4 and has missed all three games since. Coming into the game Dallas is last in the Western Conference and Golden State is second behind the Houston Rockets.

Golden State’s big scoring three of Steph Curry, Kevin Durant, and Klay Thompson were responsible for 75 points, or 56% of all the points scored by the Warriors. Curry and Thompson did not shoot the ball very well that game, with Curry shooting 2-10 and Thompson shooting 3-9 from three. Yet, they both managed to score over 20 points, with 13 of Curry’s 29 coming from the free throw line where he shot 100%. The Mavericks will get a break from the limitless range of Steph Curry this time around but expect Klay Thompson and Kevin Durant to handle more shot making responsibilities.

Pace: The Mavericks and Warriors are polar opposites when it comes to the pace that they play at. Golden State ranks 5th in the NBA with 103 possessions per 48 minutes. With their abundance of shooters and Steve Kerr’s space and pace offense, this team works the ball around the arc and throws three-point daggers into your team’s heart in mere seconds. They do not shy away from pulling the trigger, which ultimately results in the opportunity for more points. Dallas must slow the Warriors down by making them play to their pace. Dallas ranks 26th in the NBA in pace at 97 possessions per 48 minutes. Slowing the Warriors down will lead to less possessions and opportunities for points from the highest scoring team in the league at 117 points per game.

100: 100 points seems to be the key for the Mavs to win. Dallas only has one win when their opponent scores over 100 points. That win was against the Denver Nuggets when they scored 122 points, their highest scoring game this season. Golden State has only scored less than 100 points in three games this year. Their record in those games is 1-2 with a win against the Miami Heat and losses to the Oklahoma City Thunder and the Boston Celtics. The Warriors have scored over 110 points in 18 of their 28 games.

Harrison Barnes vs. Kevin Durant: Steph Curry (out) , Draymond Green (doubtful), and Nick Young (doubtful) are expected to be out of the lineup. Expect Harrison Barnes’s replacement, Kevin Durant, and Klay Thompson to do the heavy lifting. In the three games since Curry went down Durant has averaged 33 points, 10 rebounds, 7 assists, and 3 blocks in 37 minutes while shooting 50% from the field and 40% from the three-point line.

Barnes may not guard Durant, as Coach Rick Carlisle might opt to stick Wesley Matthews on him. However, these two will always have their performances compared to one another, especially when they play each other. Dallas will need him to play better than he has since Dennis Smith Jr. went down with his injury. Over his last 3 games, Barnes has averaged 18 points, 5 rebounds, and 2 assists while shooting 46% from the field and only 30% from the three-point line. He will also have to shake his historical struggles against his former team. Barnes has never beat the Warriors since he left. In the four games he has played he has averages of 17 points and 5.5 rebounds while shooting a paltry 40% from the field and 19% from the three-point line. In their first meeting this year he put up 13 points, 7 rebounds, and 3 assists, but was a -20 in plus-minus – his worst plus-minus against Golden State. Expect Barnes to continue attacking the basket and using the mid-range game that he seems to have stolen out of Dirk’s playbook in order to carry this Mavs team that is missing DSJ.

The game begins at 9:30 central time on Fox Sports Southwest.