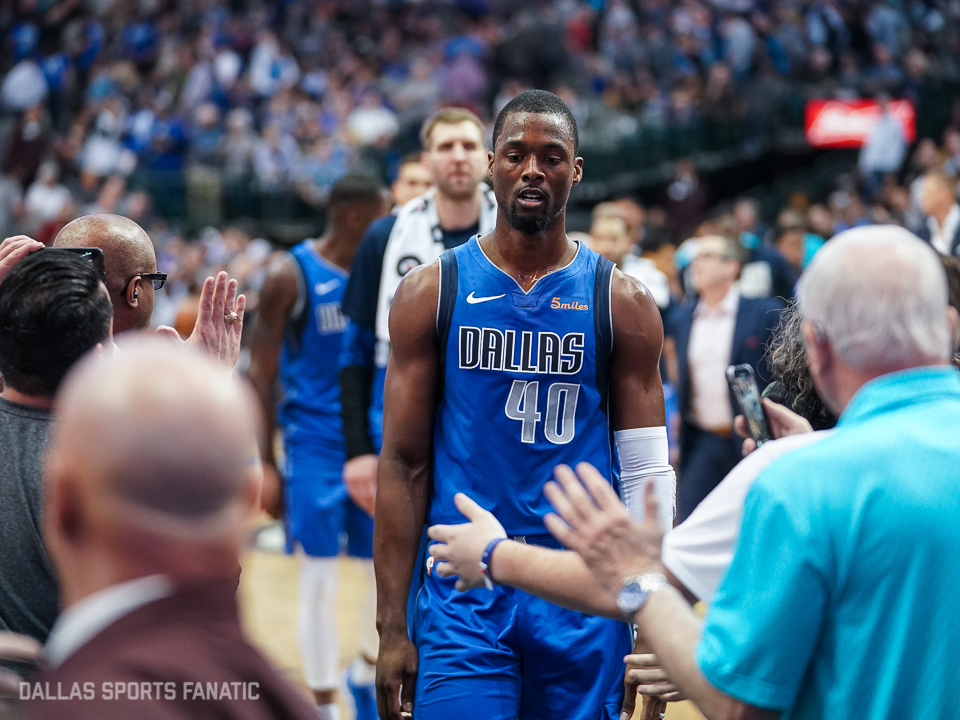 Mavs win just a footnote in crazy night at the AAC

Mavs win just a footnote in crazy night at the AAC

Before the Mavericks players, coaches and fans could even get an entire game under their belt with the additions of the Kristaps Porzingis blockbuster trade of last week, another move rocked the team early in the second half of Wednesday night’s 99-93 win over the Charlotte Hornets.

Reports of Harrison Barnes being traded to the Sacramento Kings break during the game
In a disappointing development, news of a Harrison Barnes trade to the Kings broke in the middle of the game. Barnes sat out the final quarter and a half but admirably remained on the Mavericks bench and cheered for what would soon be his former team to finish off their win.  The news of the trade of Barnes during a game he was playing in made a pretty major splash online.  The King himself even felt motivated to comment on it.

After the game, all members of the Mavericks organization had nothing but good things to say about Barnes and what he has done in two and a half seasons in Dallas.  The most vocal about these feelings was coach Rick Carlisle.

“I am going to miss him an awful lot…  He is a special guy.  He is about all of the right things — on the basketball court and in the community.  He is an example of for what you want your kids to be.”

New Maverick Tim Hardaway Jr. expressed disappointment in only being a teammate of Barnes for a short time.

“It’s tough.  Coming in here, I was picturing playing alongside him for years to come.  It’s a business… and it happens to the best of us.  Nobody’s safe really.  I want to thank HB for welcoming me to the franchise and he helped me out in the time when he was here.”

While the return for Barnes seems a bit shallow (2017 first round pick Justin Jackson and a likely-soon-to-be bough out Zach Randolph, Mavs fans who were eager to make noise in free agency this summer can now rejoice as this move puts Dallas right back in the thick of things this summer.

There is a new leader in the clubhouse with cap space. The trade to acquire Zach Randolph and Justin Jackson now has the Mavericks with $13.1M in room to either use at the deadline or up until June 30. Dallas now projects to have $30M in room for… https://t.co/dHQ2xPxjTg

Tim Hardaway Jr. makes biggest splash of new Mavericks
For those that thought maybe Tim Hardaway Jr.’s role on the Mavs would be significantly less than the one he had as a go-to scorer in New York, his mentality Wednesday and the Barnes move may take away any chance of that happening.

Hardaway Jr. shot 5/16 in his first game as a Maverick but did have a few memorable moments despite the poor shooting percentage.

Tim Hardaway Jr is on the board for @dallasmavs in style!

“It felt great,” Hardaway Jr. said of his first game in Dallas.  “I haven’t played basketball in like a week, so it was good to just get a good feel out there with everybody.  I played aggressive and that’s all you can ask for.  I know the shots are gonna come– Luka attracts a lot of attention out there.  It’s my job just to make the shots he makes easy for us.”

Trey Burke played about four scoreless minutes in the second half and Courtney Lee had a DNP-CD in his first night in a Mavs uniform.  Lee was a teammate of Devin Harris with the New Jersey Nets back in their historically 2009-2010 season when they finished 12-70.  Harris shared his thoughts on being back with his former teammate from over a decade ago.

“Obviously with being traded here, he’s (Lee) looking for someone who’s been in the area and knows the system.  I’m just trying to help him get acclimated as fast as I can.  It’s good to have someone I’ve been with before.”

Notes from a Mavs win
Rookie phenom Luka Doncic notched his third triple-double (all since MLK Day) but was not immune to the Mavericks intense shooting woes on the night.  Doncic shot just 5/20 from the field and the entire team shot just 40% from the field.

Dorian Finney-Smith and Dwight Powell each notched double-doubles and helped big time in the Mavericks edging the Hornets on the glass 57-47.

All-Star starter Kemba Walker certainly “got his” with 30 points on the night but the rest of the Hornets had a hard time keeping up.  Jeremy Lamb was next up with 15 points.  The Mavericks had a more balanced scoring attack with six players in scoring in double-digits compared to just three for the Hornets.

The Mavericks will not have practice Thursday as it has been an insane several days for the ever-changing roster.  The win Wednesday pushed them to 25-28 and still within earshot of the 8th seed in the Western Conference playoff race.  Up next is a big challenge with the East leading Milwaukee Bucks coming to town on Friday night.