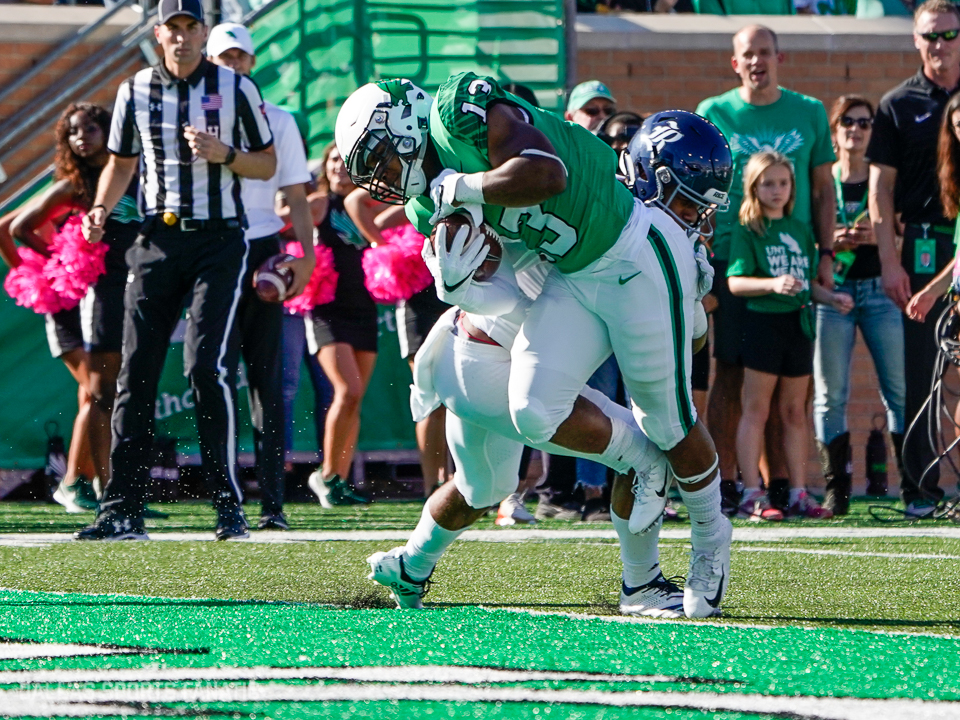 It was a fast start for North Texas as junior quarterback Mason Fine led a balanced attack to march the offense inside the two-yard line. On third-and-goal, sophomore running back DeAndre Torrey scored on a one-yard touchdown run. It would be one of three rushing touchdowns he would have in the first half.

After that, it was more of a messy game for the Mean Green through the first quarter. The sloppy play led to a break down on defense, allowing Incarnate Word’s Ra’Quanne Dickens to barrel down the field for a 55-yard touchdown run, putting the Cardinals on the board, 10-6 early in the game.

Despite early drops by the Mean Green, the offense started to click and managed to get separation by halftime. In addition to Torrey scoring on the ground, Fine would throw two touchdowns to Rico Bussey Jr. and Jalen Guyton. The Mean Green would have 41 points by the end of the first half.

The second half started out with promise for the Cardinals as Denton native quarterback Jon Copeland got the offense inside the Mean Green 20, but were ultimately bogged down and had to settle for a 29-yard field goal.

The Mean Green offense didn’t slow down in the 3rd quarter as Fine and Bussey connected for two more touchdowns to put the game out of reach.

Fine would finish the game with 418 yards passing and four touchdowns. He also went 25-40 and just one pick. Fine also became the first UNT quarterback to throw for 400 yards in back-to-back games. Bussey Jr. would have 8 catches for 128 yards and three touchdowns. Guyton added 5 catches and 111 yards with one touchdown.
Torrey added 44 yards rushing on 16 carries in addition to his three rushing scores. Torrey gave praise to his offensive teammates for his performance tonight.

“I think the o-line did a great job,” Torrey said. “Also having Mason Fine, they can’t stack the box on me.”

The offense was prolific once more as it gained 607 total yards on just 91 plays. After two games, the Mean Green has 104 points, the most through two games breaking a record of 101 in 1919. Despite the great numbers, Fine said that there is still room for improvement.

“We improved from last week, “Fine said. “We still need to be physical on the perimeter and on the offensive line.”

Head Coach Seth Littrell echoed his quarterback’s words and thought that the team improved over last week, but the job isn’t done yet.

“Thought overall it was a complete game, we still have a lot to work on,” Littrell said. “We are still nowhere where we need to be but I am excited about the start we’ve had.”

The bigger test now awaits this team as they Arkansas on the road. Littrell said his team is ready because they set high standards for themselves and the team.

“We’re going on the road to play an SEC team and I know it will be a big challenge for us,” Littrell said. “We’re going to have to be a much better team to have success this week. But I know the guys are excited about the opportunity.”

The Mean Green will look to extend their winning streak to three games by going on the road to take on Arkansas. The game will be televised on the SEC Network and kickoff will be at 3 p.m. CST.