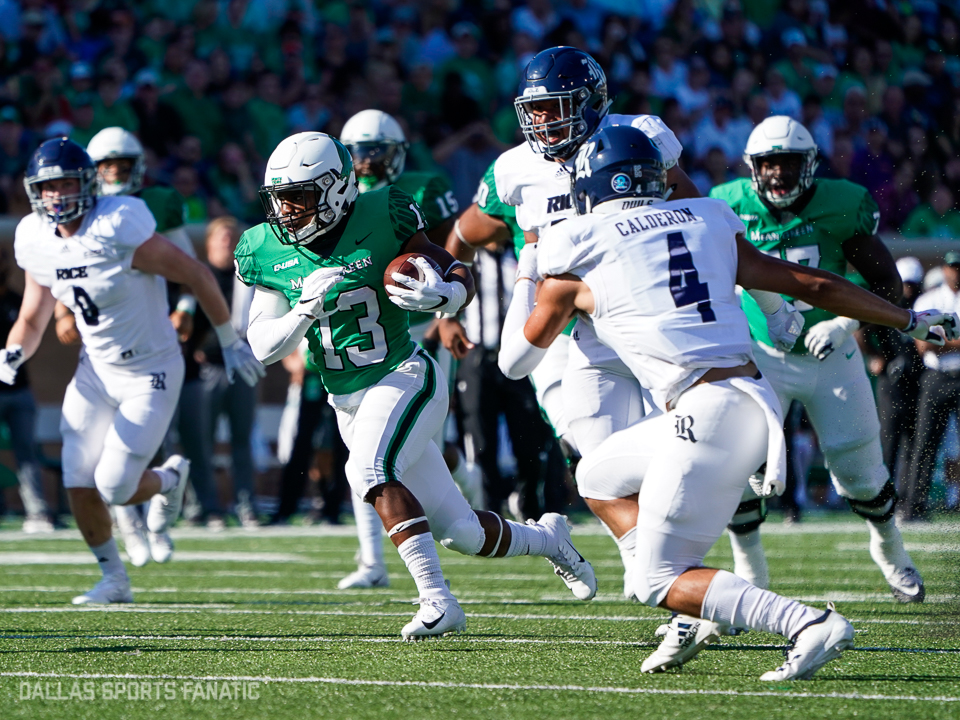 The losing streak is over as the North Texas Mean Green (1-0) defeated the SMU Mustangs 46-23 Saturday night at Apogee Stadium in Denton, TX.

The Mustangs offense had a forgettable half as they started with two three-and –outs and then SMU quarterback Ben Hicks is picked off by UNT senior cornerback Kemon Hall who returned it 36 yards for the touchdown, increasing the Mean Green lead to 14-0.

The second quarter was much more of a defensive battle as both teams traded punts back-and-forth. The Mean Green offense was able to get deep into SMU territory twice before being forced to settle for field goals, as they went into halftime leading SMU 20-0.

The second half continued with the Mean Green offense dominating the Mustangs defense by scoring 16 unanswered points in the third quarter alone.

Though, SMU would make it interesting with some late fourth quarter touchdowns, the Mean Green stamped their win with a 96-yard kickoff return touchdown by sophomore DeAndre Torrey.

Fine had one of his best games throwing for 444 yards and two touchdowns. He went 40-50-0 for the game. Junior Rico Bussey was the leading receiver with nine catches for 109 yards. Guyton had seven catches for 95 yards and two touchdowns. One of the biggest takeaways was the time of possession between the two teams. UNT had the ball for 44:13 and SMU only had it for a total of 15:47. UNT also went 5-5 on red-zone scoring chances. SMU went 1-1.

It was a proud night for head coach Seth Littrell who said that this was a game that the players were looking forward too since last season.

“Really excited about the way they came together, but we have a long way to go,” Littrell said. “Anytime we can play well in all three phases in the opening game, it was impressive.”

It was a big night for North Texas as it broke the attendance record for a single game with 29,519 at Apogee Stadium. This beat the previous school record of 29, 437 against Baylor in 2003 at Fouts FieldMEan. Littrell appreciated the fans for coming out and making it a special night.

“Our players really fed off that energy,” Littrell said. ” I am so happy for this fan base and the Mean Green Family. This is the first step in something that could be special, but we have a lot of work to do to accomplish our goals.”

UNT will face Incarnate Word next week at Apogee Stadium. The game will kick off at 6:30 p.m. CST.