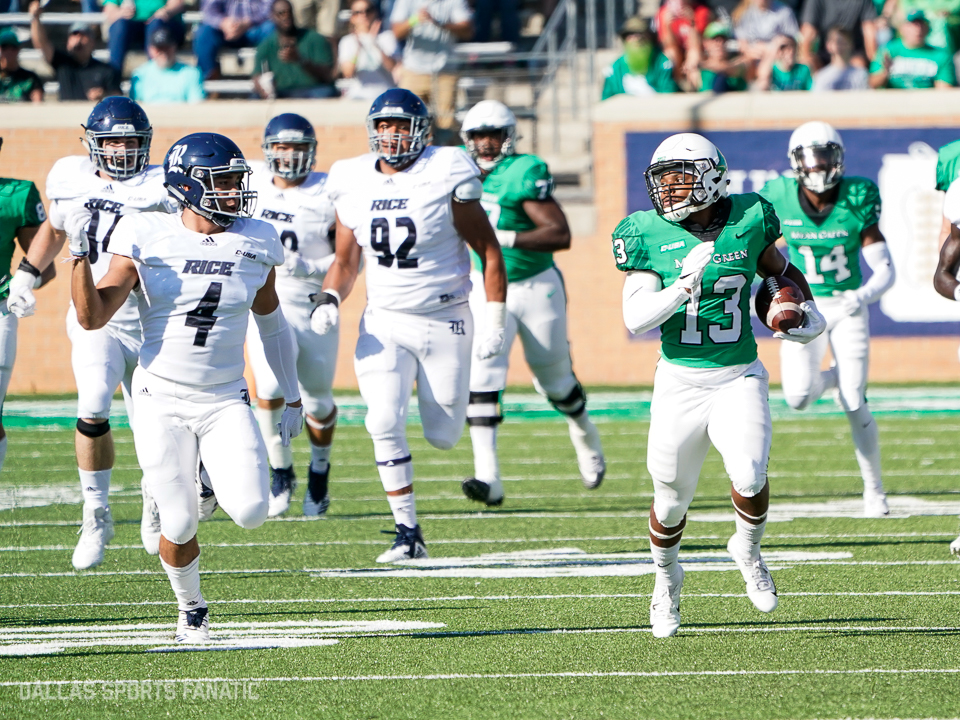 Mean Green get back to winning with blowout victory over Rice

Mean Green get back to winning with blowout victory over Rice

The Owls started out the game with an up-tempo offense, which caught the Mean Green defense off-guard. After hitting a 35-yard pass to get inside UNT’s territory, Rice would pound the ball and run it from two-yards to give the Owls the early 7-0 lead.

The Mean Green would respond with their own promising drive, but sacks down the stretch led to settling for a field goal.

The offense would wake up when quarterback Mason Fine hit Rico Bussey Jr. for a 68-yard touchdown pass to put the Mean Green up 10-7. The pass would be the longest pass this season and Bussey Jr.’s tenth touchdown this season, tying him for sixth on the single-season scoring list.

Later in the second, DeAndre Torrey would have himself one great drive rushing three times for 72 yards. First a 44 yard run, then a 17-yard rush and finishing it off with an 11-yard touchdown run, extending the Mean Green lead 17-10.

The two teams would have a defensive battle for most of the half, with the Owls managing to get a field goal at the end, cutting into the Mean Green lead 17-10.

The third quarter started out well for the Owls as they force a fumble on the kickoff return and recovered the ball inside the Mean Green redzone. Rice quarterback Wiley Green finds Aaron Cephus for the three-yard pass to tie the game at 17.

UNT would mount a successful drive to answer back but the offensive couldn’t handle the pressure leading to a sack and forcing the Mean Green to kick a field goal, giving them a 20-17 lead going into fourth quarter.

After some back-and-forth, the North Texas offense finally woke up as they marched 95 yards and scored on a DeAndre Torrey five-yard touchdown catch. Torrey would then take over the fourth quarter, wearing down the Rice defense and scoring two more touchdowns to ice the game at 41 to 17.

“I’m proud of the way the guys finished the football game,” head coach Seth Littrell said. “It was a great win for us on homecoming.”

Fine would finish the game 333 yards passing and two touchdowns on 18-of-35 passing. Fine made his mark on the record books as he is now just 16 yards away from tying the UNT all-time career passing yards. The record is 8,519 held by Mitch Maher (1991-1994).

Busey had 4 catches for 145 yards and a touchdown. Torrey had a career-best 130 yards on 15 carries and three rushing touchdowns. He also caught one touchdown.

Though they offense had some career days, the execution was as polished as it had been in past games.

“We still need to work on a lot of things,” Fine said. “We’ve got some time off now and we’ll take advantage of the open week and continue to work and get better.”

The Mean Green have next week off but will play Old Dominion on the road after their open week.