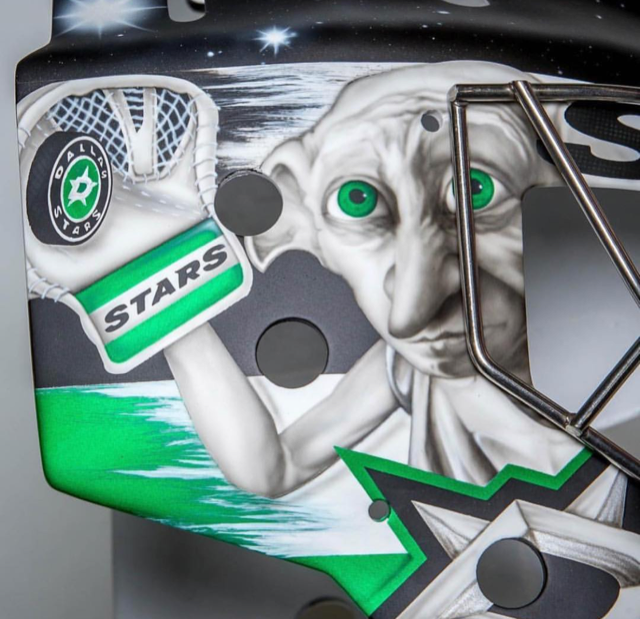 Anton Khudobin is on a new NHL team, but this is not his first time playing hockey in the Lone Star State.  The 5’11” Khudobin played professional hockey, in full or partial seasons, from 2007 to 2010, in Texas.  He split time between ECHL, AHL, and NHL throughout those years, playing for the Texas Wildcatters in Beaumont, Texas, the Houston Aeros, and the Minnesota Wild respectively.

For Stars fans, it’s a different face with the same goal.

It would appear that Anton Khudobin is going to back Ben Bishop in net this year.  This comes at the end of Kari Lehtonen’s nine-season tenure in the crease.  This will be the Stars’ first season since the turn of the decade, without the Big Fin in net.  To put this in perspective, this is the first year the Stars will not see Kari Lehtonen in net, since Marty Turco’s final season in Big D.  For many, it will be a sad sight to see…Others may experience unadulterated joy, as there seems to be few and far in between.

Save percentage and GAA (Goals Against Average) have been tell-all, in regards to goaltending efficiency for decades.  Lehtonen enjoyed a .912 save percentage, while Khudobin nursed a .913 last season.  Lehtonen played six more games, taking over the main haul while Bishop was out injured last year.  Khudobin backed up 2014 Vezina Trophy (the best goaltender as voted for by the 31 GMs of the NHL) Winner, Tuuka Rask, in Boston.  He finished the season with 31 starts for the B’s. Both goaltenders toiled along, and finished with a matching 2.56 goals against average per game.

With a such a seemingly lateral move, one ponders the lifelong inquiry; why?  Why would the Stars let such a battled veteran go, especially with what seems to be an outwardly identical goalie?

Saying that the Stars underperformed over the last several seasons would be an injustice to the term ‘underperformed’ itself.  In every failure that has ever existed, another eternal question begs, “who’s fault is it?”  For many, that man was Kari Lehtonen.  The multitude of defensive breakdowns, injuries, coach changes, roster changes, and everything in between were not enough to save the Big Fin from his destiny of becoming the fall guy.  As validated as those arguments may be, the bottom line is that he couldn’t make it happen with the pieces that were present around him.  As the netminder that was perceived to be the villain, something had to be done.

Another thing to consider is Khudobin’s previous experience living and playing hockey in Texas.  Hailing from Russia, Khudobin’s first language is not English.  Goalies are notoriously fickle creatures, which is something upper management in Frisco has clearly taken note of.

Imagine moving continents with the ‘big dream’ of professional sports…Did Khudobin make it work?  Absolutely.  Has been bounced around the Show? Equally true. With consistency being the name of the game, it’s up to coaches and management to make these idiosyncratic guys feel comfortable.

This is the second goalie that Stars have signed, who spent time in Texas during their early years (Ben Bishop played for the Texas Tornadoes as a minor.)  Now it is clear, the Stars have locked up a tandem of ‘tenders with Texas ties.

If Dallas continues to get the same, consistent production that Anton put out last year, then the Stars may have coupled themselves with the toughest two goalies in the league.