The Dallas Mavericks (46-31) take on the out of playoff contention Sacramento Kings (27-49). Much like the game against the Lakers, this is one that the Mavs must take care of and handle their business. The Mavs again face a team with injury issues as point guard Isaiah Thomas (quad) doesn’t appear to be available for the game. Sacramento enters tonight on the heels of 102-69 loss the Golden State Warriors – a game where they got flat out embarrassed playing uninspired basketball.

The Game At Hand:

With every game essentially being a playoff game, the Mavs have not disappointed on this California road trip. Dallas logged wins against the Clippers and Lakers in STAPLES Center and has the Mavs’ confidence elevating at the right time. Thomas’ probable absence is huge for the Mavs as the emerging point guard is capable for explosive offensive nights any day of the week.

Although the Kings have talent they have underperformed immensely this year.  With the likes of Rudy Gay, Demarcus Cousins and Derrick Williams there is no denying their roster has potential. The mixture of bad chemistry, uninspired play and being in the West has prevented a skilled team from a good campaign. The Mavs should really have no problem taking care of business seeing as they have a playoff spot to fight for.

– This marks the last of four meetings this season; Mavericks lead 2-1. Dallas won both games at home by a total of seven points. Kings defeated the Mavs 112-97 in Sacramento.

– The Mavericks sit alone in the 7th spot in the West. 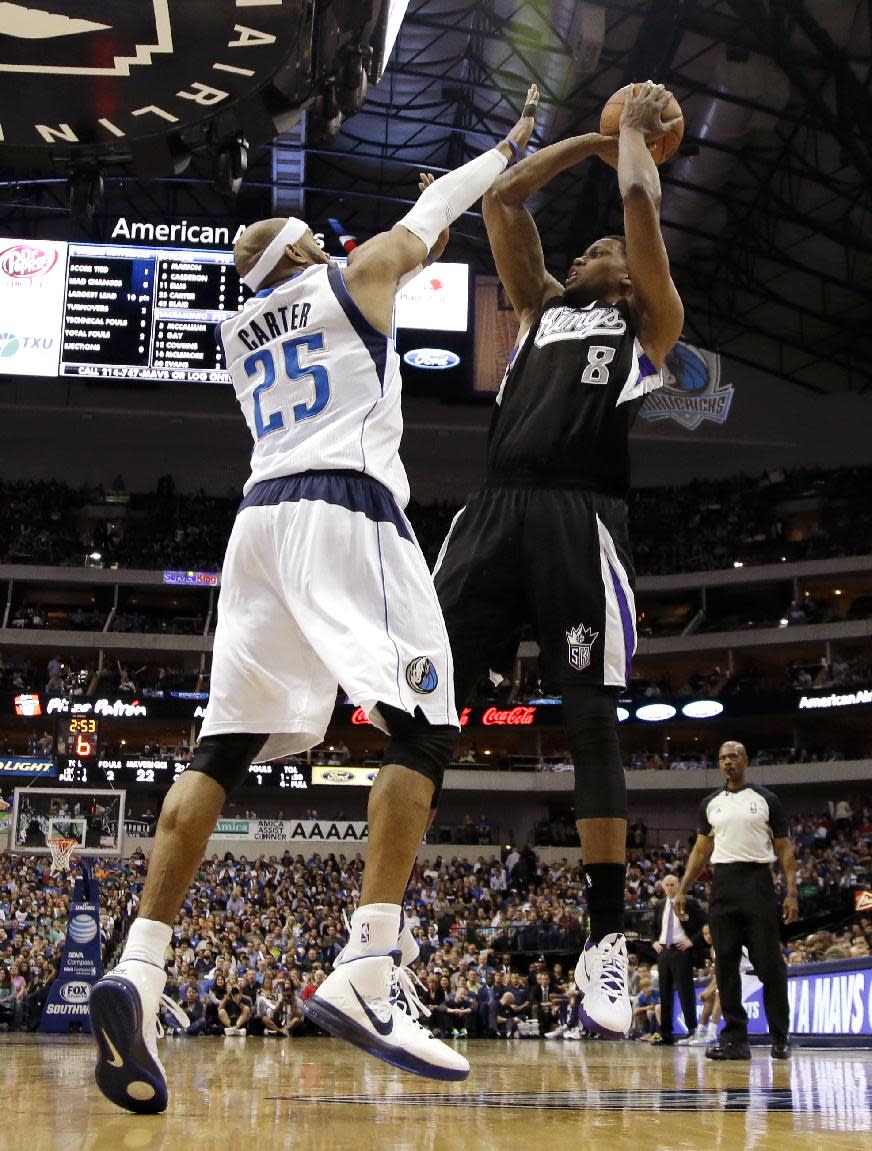 Keys To The Game:

The defensive pressure is on Shawn Marion and Jae Crowder to contain Rudy Gay.  Gay has torched the Mavs in their last two meetings scoring 35 and 30 points. He’s done it by being aggressive and attacking the basket either getting to the free throw line or finishing around the rim.  If we can stop Gay from having a good game the Kings’ chance at a victory decrease. However, as shown in the past, that is easier said than done.

2. Winning The Battle Down Low

Besides attempting to contain Gay, the Mavs need to contain Demarcus Cousins and Reggie Evans down low. I expect to see Dalembert play a huge role in tonight’s game; keep the beast that Cousins is from totally controlling the game.  With Cousin’s size and strength Brandan Wright will have a tough time making the same impact that he did against the Lakers, meaning Dalembert will have to step up and be the good Dalembert that we have seen of late.

Matchup of the Night:

The Kings have played the Mavericks tough this year and that is mainly the product of Rudy Gay’s great play. In late January, Dirk had 34 points while Rudy Gay had 35 in the second meeting. Sacramento will throw Evans and any big at their disposal on Dirk, but the 11th all-time NBA scorer should have no problem finding his shot.  If he gets into  a groove early, I could see Dirk having the huge game we need from him tonight.

“We’re playing a lot better on the road and we’re playing really, really good basketball. We’ve got a really, really tough one on Sunday. You know, [the Kings] beat us pretty bad over there last time and then last week was a close game, so we’ve got to get ready.”

Tip-Off begins 5:00 PM CST at Sleep Train Arena in Sacramento, California. The game will be televised on Fox Sports Southwest.