Star wideout Amari Cooper and slot receiver Randall Cobb are headed for free agency. With other star players also slated to hit the market, the focus has been on retaining players for 2020. However, the Cowboys don’t have to worry about one of their young stars’ contract situation. Michael Gallup flashed big time potential in his second NFL season. With uncertainty surrounding Amari Cooper and Randall Cobb, Gallup could be headed for an even bigger role in 2020. The Dallas Cowboys have to feel comfortable in their offense with Gallup around.

Michael Gallup competed with the likes of Terrance Williams, Cole Beasley and Allen Hurns for the top receiver spot coming into 2018. After a splash trade for Amari Cooper, Gallup settled in as the number two target for Dak Prescott. The 23-year old entered 2019 looking to make a sophomore leap. Gallup did plenty of leaping in 2019, showcasing explosive athleticism. Gallup had multiple “catch of the year” worthy plays, particularly against the Detroit Lions and Washington Redskins. Michael Gallup joined fellow receiver Amari Cooper with 1,000 receiving yards in 2019. He put a cap on his breakout season with three receiving touchdowns in the team’s season finale versus Washington. Gallup is a young playmaker, who flashed his game changing ability as the season wore on. 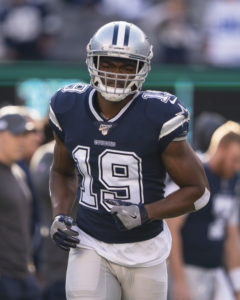 Michael Gallup became a household name among NFL fans in 2019. His dynamic athleticism made him a high quality playmaker in one of the league’s top offenses. While Gallup looks primed for another leap, his role depends on the outcome of Amari Cooper’s contract situation. If Cooper returns, look for Gallup to continue being the number two option. However, if Cooper bolts, the Colorado State alum would be the top option for the Cowboys’ passing game in 2020. Despite offseason talk surrounding the Cowboys’ free agents, Michael Gallup deserves recognition for his performance in 2019. Time will tell if Gallup becomes the headline in the Cowboys’ offense in 2020.