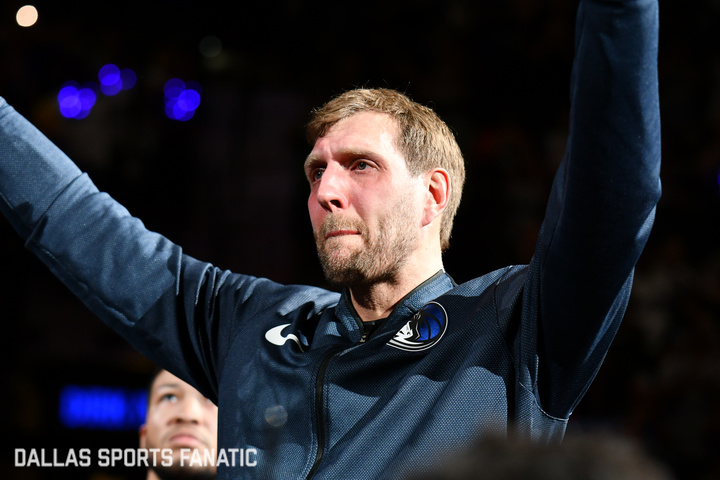 Dirk Nowitzki got his #41 jersey retired on Wednesday night as the Dallas Mavericks celebrated his illustrious 21-year career in a Mavericks uniform.

Dirk is the greatest Maverick of all-time and that’s not up for debate. Nowitzki led the Mavericks to their only championship in 2011 while hoisting the Finals MVP trophy along with winning the 2006-07 MVP, making 14 All-Star appearances, 12 All-NBA teams. and being the 6th all-time leading scorer in league history.

Along with the accolades, Dirk is one of the most beloved players in league history. It’s difficult to find a player, coach, or fan anywhere in the world that doesn’t appreciate nor love what Dirk has done for the game of basketball worldwide.

In fitting fashion prior to the ceremony, the Mavericks knocked off the Golden State Warriors in a low-scoring, defensive battle, 99-82.

In honor of his night, we took to Twitter to see all the support and celebrating of Dirk across the league throughout the day. Check out NBA Twitter’s reaction to Dirk’s jersey retirement below.

There will never be another 💙 #41Forever | #MFFL pic.twitter.com/r1CVkGPUZl

“It’s gonna be BIG.”@mcuban unveils the new statue of @swish41 that will live outside the AAC 🐐 pic.twitter.com/PDRIEItRNr

Luka on watching Dirk’s jersey retirement and clips of the Mavs’ 2011 championship: “That’s what I want to do one day.”

"Want to come back??" 🤣 #41Forever pic.twitter.com/DMejvgtdkr

"You guys got me going down memory lane!"

Dirk Nowitzki reacts to his highlights from an incredible NBA career!

Watch his Jersey Retirement Ceremony TONIGHT on NBA TV, https://t.co/Pqxh2EPubW or the NBA App after the @dallasmavs game. #41Forever:

Can’t wait for tonight. So much respect for you @swish41! Thank you for everything. What a player but most importantly what a great person!  #41Forever 💯❤️ pic.twitter.com/AHUcrHO3Ac

"It's been an amazing ride. 21 years in the same organization and the same city, that has meant a lot to me." #41Forever@dallasmavs | #MFFL | @swish41 pic.twitter.com/I0dfkHe6i2

Dirk Nowitzki will have his jersey in the rafters tonight

Legendary ⁦@swish41⁩ appreciate all you’ve done for me and my family and the ⁦@LadyJetsBBclub⁩ the city of Dallas ⁦@dallasmavs⁩ congrats brother. #Goat pic.twitter.com/duZ6ZxzaC3

Go through the legacy of the 75th Anniversary Team’s Dirk Nowitzki!

"Its about winning and having fun doing it" -🐐
Paved the way for so many of us. One of the best to ever do it. Thank you Dirty! #41Forever https://t.co/BYZ188dxo4

Congrats to @dallasmavs Dirk Nowitzki (@swish41) on your jersey retirement – a true leader on and off the court! #41Forever pic.twitter.com/KBiXECctbk

As Dirk Nowitzki gets his jersey retired tonight in Dallas, the Dubs reflect on an iconic career. pic.twitter.com/K4mhgrcWNq

Some champions in the building 🏆#41Forever pic.twitter.com/m8ZJxrq9zk

Steph Curry on Dirk: "An icon. Everyone talks about changing the game and he definitely did that… he opened up the gates for international players… just the art form of shooting the basketball with his height and touch, something no one has ever seen before."

@swish41 it’s been an honor to share the court with you. You’re an unbelievable basketball legend and unbelievable person & teammate. You deserve every accolade coming your way & a 1st ballot Hall of Famer. (Even though you tried to dunk on me smh🙄) Enjoy it my friend #41Goingup

“Dirk is one of the last one-team superstars in recent NBA history. … We saw him suffer, we saw him fail … we saw him rise again … one of the all-time great players.”

My idol growing up! Congratulations on getting your jersey retired! Honored to have had the chance to share the court with you! @swish41 #41Forever pic.twitter.com/XlOlCdepu1

Congratulations to NBA Hall of Famer, Champion and Top 75 player of all-time, former Dallas Maverick Dirk Nowitzki on his jersey retirement tonight! @swish41 revolutionized the game for power forwards with his shooting, especially his ability to shoot off of one leg!

Jason Kidd: “When you talk about Dirk, two things stand out: work and win. Those are the only things he cared about. … Luka has the perfect big brother mentor.”

"I had to come. He's my favorite teammate of all time."

"The stories every time we get together are never old… It's special to me that our families get to spend so much time together, and kind of build more memories in a new way" @SteveNash on his 20+ years of friendship with @swish41 #41Forever pic.twitter.com/C6WfF21kRH

4️⃣1️⃣ goes to the rafters tonight 🙌

Part II from me on today’s Dirkfest:

Haven’t done one of these in about five years, but my @BallySportsSW family let me assemble an essay to not only trace the @swish41 career arc but tell the story of how No. 41 came to be: https://t.co/Jway8ONMyb