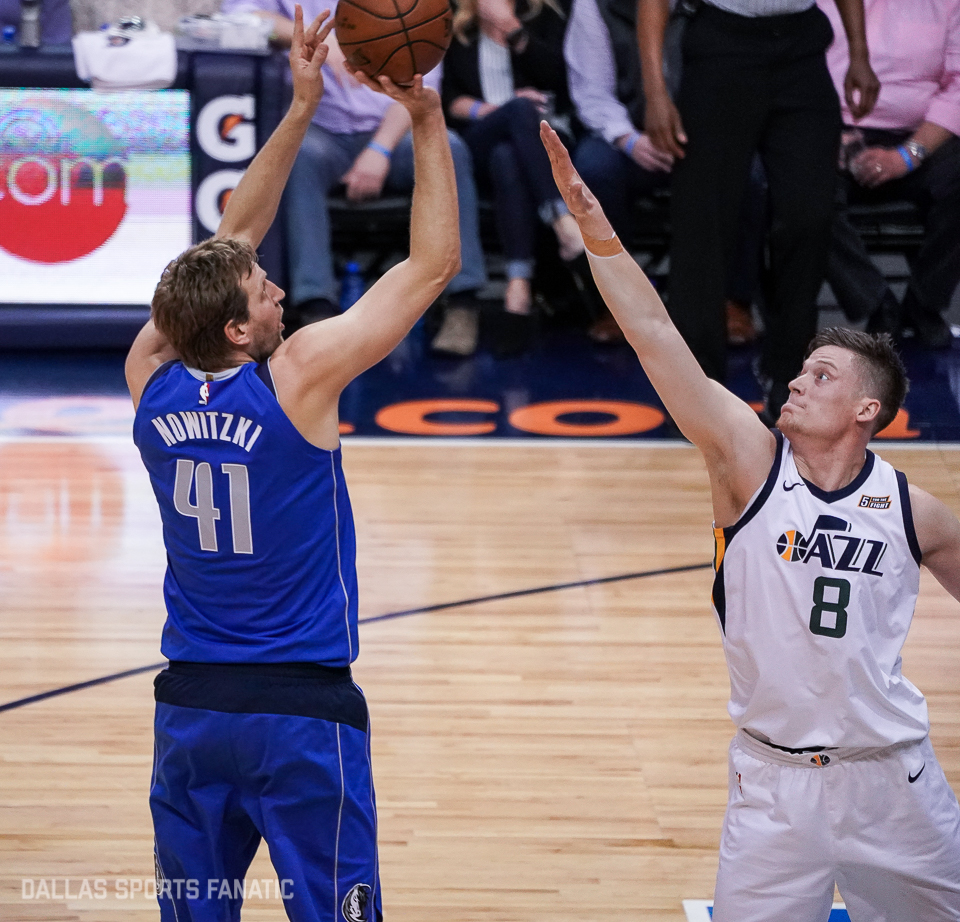 The Utah Jazz came into Dallas on a 21-3 winning streak since the end of January and sole owners of eighth place in the Western Conference. Dallas would keep it interesting in the first half but ultimately fell to the Jazz 119-112. Jazz rookie guard Donovan Mitchell finished with 26 points, Joe Ingles had 18, and Ricky Rubio scored 22 while shooting 50% from the three point line with four threes. J.J. Barea, Harrison Barnes, and Yogi Ferrell lead the Mavs in scoring with 23, 21, and 20 points respectively.

With Dennis Smith Jr. on the shelf due to an ankle injury the Mavericks starting line-up featured Dirk Nowitzki, Dwight Powell, Dorian Finney-Smith, and thankfully Harrison Barnes and J.J. Barea. Harrison and JJ were key to keeping the Mavs in the game early.

Barea and Barnes opened up the scoring for the Mavs by combining for the teams first 20 points with 10 a piece. They were largely responsible for the Mavs only trailing by three points after the first despite 14 points from Donovan Mitchell and 9 points, including two made three pointers, from Ricky Rubio. Both the teams shot roughly 60% from the field in the first quarter for a score of 37-34 in favor of Utah.

The Jazz came out firing at the start of the second quarter and the Mavs cooled off. Utah built a 15 point lead to put the themselves ahead 52-37 on the back of Joe Ingles. Ingles scored eight points, including two three pointers, 5 minutes into the second. Despite the Jazz hot start to the second Dallas would rally back. JJ Barea ignited a 14-2 run to pull Dallas within three with 5 minutes left to go in the quarter.

Things started getting out of hand in the second half. Utah opened up a 16 point lead after going on a 9-2 run to push the score to 76-60. Dallas made a small push but failed to pull within 10 points throughout the quarter. Ricky Rubio made two more three pointers, Joe Ingles chipped in 6 points, and the Jazz took a 96-81 lead into the fourth.

The fourth was a continuation of the third for the Jazz. Utah held the lead throughout the fourth. Dallas made a small push with 7:45 to go to pull the game within 10 but former Maverick Jae Crowder drilled a three to increase the lead to 13, 109-96. Jalen Jones, Maxi Kleber, Kyle Collinsworth, Aaron Harrison, and Doug McDermott started a 8-0 run to pull the Mavs within eight but Donovan Mitchell would make two consecutive clutch baskets at the end of the game to ice it.

Newly signed Aaron Harrison scored his first points as a Maverick by going 2 for 3 on the free throw line after being fouled shooting a three pointer. He finished with 6 points, 2 rebounds, 1 assist, 1 steal, and 1 block in 20 minutes. Jalen Jones also got some playing time and finished with 4 points and 3 rebounds in 15 minutes.

Dirk Nowitzki keeps on etching his name in the record books. Nowitzki passed Kevin Garnett for third all-time in regular season minutes played with 50,419 minutes at the beginning of the second quarter. J.J. Barea also etched his name in Mavs history tonight by becoming 8th in Mavs history in games played.