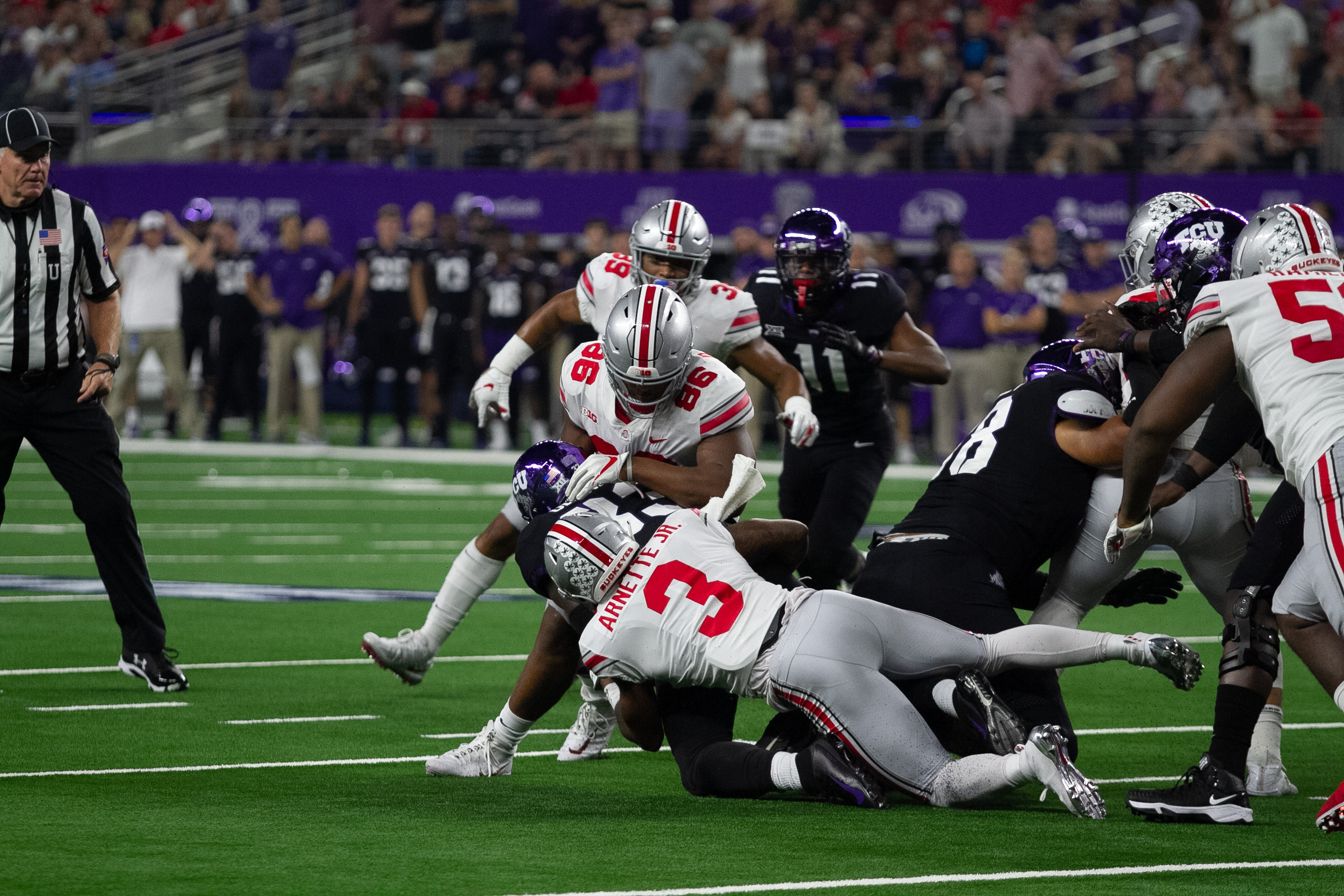 Coach Gary Patterson and the TCU Horned Frogs lose late battle with Ohio State, 40-28 in Arlington. It was the final non-conference game for the Frogs and the final game without head coach Urban Meyer for Ohio State.

AT&T Stadium, with both the Ohio State and TCU fan bases well-represented, was the center of the College Football world Saturday night in the prime-time slot. Both teams entered the weekend with 2-0 records and sky-high expectations, and Ohio State took advantage of a quality resume win.

One of the rare weak-spots for the Frogs in weeks one and two were the slow starts. Something that they couldn’t afford to allow in this matchup of top 15 teams. However, Ohio State drove down the field in their first drive and tacked on a 20-yard field goal to take a 3-0 lead.

Then with 7:13 left in the first quarter, TCU quarterback Shawn Robinson rolled out to his right to escape pressure in the pocket, near his own goal-line, and was sacked from behind and fumbled in the process. The fumble was recovered by Davon Hamilton in the end-zone to make it a 10-0 Buckeye lead.

TCU then answered with a long drive that capped off with a six-yard Sewo Olonilua touchdown run to bring it back within a field goal, 10-7. After a defensive stop and a Buckeye punt pinned the Frogs back at their own 7 yard-line, a handoff to junior tailback Darius Anderson found pay-dirt to make it 14-13 TCU.

Both offenses sputtered until halftime, which helped TCU hold their one-point lead into the break. Meanwhile, the third quarter made up for the lack of scoring with five touchdowns.

TCU started the scoring with another Anderson touchdown run to make the score 21-13 Frogs. That was then followed by a 63-yard Dwayne Haskins pass to Campbell, a failed two-point conversion and a Dre’Mont Jones 28-yard pick-six to give the Buckeyes the 26-21 lead.

From that point forward, Ohio State was able to control the game with another Dwayne Haskins touchdown throw and touchdown run. TCU was able to bring the game within one score with a 51-yard Shawn Robinson strike, but that was as close as they would get in the final quarter. Ohio State wins the battle 40-28.

Both teams finished with over 500 total yards in the game, but TCU’s three turnovers were key to the loss and one of the deciding factors.

Ohio State will attempt to move to 4-0 against Tulane next Saturday. And the Frogs will travel down I-35 to meet Texas in Austin next Saturday. Kickoff is at 3:30pm from Derrell K. Royal Stadium in their first Big 12 conference game.