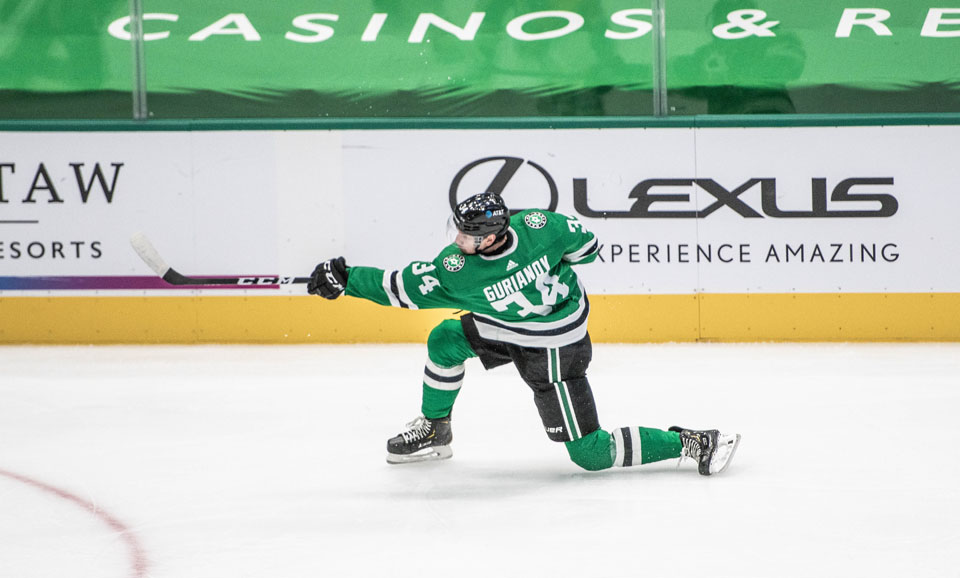 The old foes split games last year, with both teams winning at home.  Anthony Mantha recorded a hat trick in the teams’ first meeting, while Esa Lindell, Roope Hintz, and Joe Pavelski all recorded three point games in their second match up.

The Stars came into the game without Jamie Benn (lower body injury) or Roope Hintz (undisclosed).  Thomas Greiss and Anton Khudobin were the starters.

The Stars created a decent chance to score about five minutes through the period, but it didn’t result in a goal.  They mustered up three total shots, before the Wings got one on the board.

However, that first shot was lethal, as Detroit scored.  A hard forecheck on Joel Hanley became a turnover, in which the puck squirted in front of the net, and Vladislav Namestnikov slapped a bouncing puck, back handed, past Anton Khudobin to make the score 1-0.

Several chances were had by both sides, and then with a little over a minute remaining, rookie Ty Dellandrea took a goalie interference penalty.

The period concluded 1-0 in favor of the Red Wings, with shots 6-5 in Dallas favor.

Justin Dowling made a great play to chip the puck past Detroit defenders and drew a penalty for slashing against Filip Hronek, just over the five minutes into the period, resulting in a beautifully set up face off.  John Klingberg walked down the blue line, and wristed one past Thomas Greiss, just four seconds into the power play.  Pavelski and Gurianov received assists on the play.

Detroit’s captain Dylan Larkin took a lazy holding penalty with 9:42 remaining in the period, with shots and goals tied, 10-10 and 1-1 respectively, but the penalty was killed.

With just under five minutes remaining in the period, Luke Glendening, took a silly interference call, to give the Stars another chance to gain their first lead of the game.  However, Joe Pavelski would receive a pretty weak hooking penalty just over a minute into the power play, evening the strength at four a side.  Neither team would score.

The Stars managed to get some early pressure on Greiss with a few scrambles in front of the net, but could not finish.  The Wings had their chances in the first few minutes as well, but Dobby stifled them.

The penalty was killed, and extra time would be had, as regulation concluded 1-1

John Klingberg carried the puck through the slot, fumbled it when he went to shoot, then sent it back across the slot for Jason Dickinson to one time home.