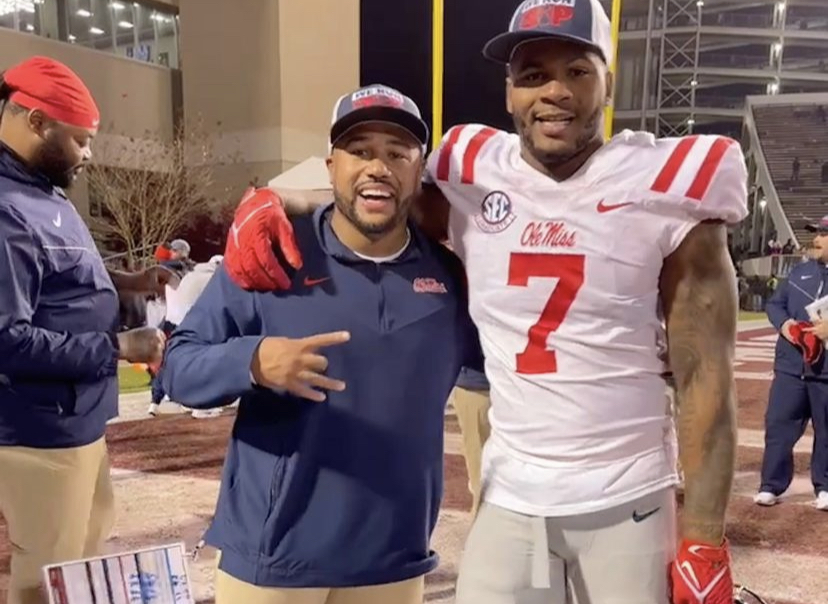 Nate Sanchez and Corey Douglas of the Silver and Blue Podcast sat down with Ole Miss DL Coach Randall Joyner to discuss what the Cowboys are getting in 2022 2nd-round pick Sam Williams and what his relationship with Williams is like.

Below are the highlights from the interview. You can find the full interview on the Silver and Blue Podcast, which is available wherever you get you podcasts. Links are provided at the bottom of the article.

You were hired away from SMU by Ole Miss and February of 2021. When did you meet Sam? And how quickly did you sort of get a feel for who he was, both as a man and as a football player?

I’m interviewing and everything and we’re eating lunch, Sam actually, like busts in the door. And is just saying hello. That’s just his personality, man, outgoing, infectious, personality, smiles, and he had his son in his arms. And he was just saying, “Hey” to the whole defense staff during my interview. So that was my first impression.

When I first got there, it was funny, he was at a workout and Coach Kiffin came up to me and was like, “Hey, man, you need to get close with that guy. That guy’s special. He’s got a gift.”

He was one of the first people in my house, I bought my first house in Oxford. And I remember we ate Chick-fil-A, I had no furniture, I had nothing in there, and we’re just chopping it up. And there’s power to testimony, I told him my story. I got to listen to his story, how he grew up and the things that he had to overcome, how he had to get to where he was to that day. It was it was a truly inspiring story, guy that had to overcome a lot of adversity, and a guy that was you know, just wanted to be great. Oh, man, it was a really, really cool experience at my house that night.

We sat down we watched every rep of his from the season before and we saw how much he just left on the table.

His heart, his work ethic, you mentioned that he didn’t really have that the entire way. So how did you go about getting him into the film room and going through that process?

We sat down we watched every rep of his from the season before and we saw how much he just left on the table.

I had to show him like, this is where you’re at right now. This is what I see on tape. Where do you want to go, right? You want to be this, you want to be that? Well, this is what it takes. Okay, this is the plan. This is how you got to do it, taking a systematic approach of how you do things, being purposeful, being an intentional, being deliberate in everything we do, we cannot waste time. You’re not a freshman. You’re COVID Senior, and the fact that you’re getting this year back is a blessing. So we can’t we can’t let it slip. Being consistent. I really believe that. So what you saw with Sam, you saw the intensity, right? You saw the great game here. But then years prior kind of cooled off. You saw the great practice player here, but then kind of cooled off. I just challenged him to be consistent and he did. And so it was really, really cool.

You gotta become the best practice player, got to be one of the first ones in and one of the last ones to leave, you got to create a routine, you got to study your opponent. You got to come in for extra film. If you just do what’s required, you’re not going to achieve what you really want to achieve. You got to grow beyond your talent right now. You’ve been relying on your talent, your talent should be the last thing they say about you. It should be he’s a great teammate, great leader, unbelievable work ethic. So those are the things and he needed

What would you say is his best trait or best talent as a defensive end that jumped out to you in your time with him? And along with that, what does he need to get better at to succeed in the NFL?

One thing that Sam has that you cannot teach, and I think it’s the number one trait as a defensive lineman is the twitch and explosion.  That’s God-given. His initial get-off, his twitch, his get-off, his explosion at the point of attack. He’s very, very strong. So he has that, which is half the battle right there, the ability to get off the rock, the ability to change direction. I think he does a really good job of that and he’s just naturally strong. He’s very, very naturally gifted.

He has the ability to just go all day. I’ve never played a D-lineman as much as I played Sam, as many reps. He just can go forever. He just has that ability.

I think something that he could continue to improve on, and this is the one thing we joke about time, I wish I had another year with him. It’s just polishing up his pass rush moves at times. He’s a speed-to-power guy and just speed guy around the edge. I know at the next level just developing those initial rushes, those counter rushes, you’re definitely gonna have to add and you’re not going to just be able to run around people and run through people all the time. That’s something that what he’s working on this summer. And that’s why I’m so excited that he went to Dallas, obviously, with Dan Quinn, very, very, very respected in the industry and unbelievable defensive mind and defensive line guy by trade. I’m really, really excited what they’re going to do with him. I think he went into a perfect situation.

How quickly did Dan Quinn gravitate to him at that Pro Day? How certain was Sam and how good did you guys feel that he was going to be the pick at 56?

He definitely lit it up. On Pro Day you saw the connection. There’s a little bit more connections too, obviously DJ Durkin was our defensive coordinator last year. And him and Dan Quinn are tight. I know they’ve worked together with each other. So there was that connection, too. I think that maybe played a role too, to get some more insight and things like that. So you kind of heard some rumblings, talking with Sam. And then he just lit it up at the Combine, the Senior Bowl, NFLPA, he checked all the boxes. So you kind of got a feel for that and just kept asking Sam, and he’s just like, “Yeah, man, I was feeling it.” So he was really, really excited, and I think is a perfect fit, for sure. And that’s why I’m excited because I just heard nothing but great things about Dan Quinn as a person. And that’s exactly what what Sam needs is somebody to love him, care for him, push him, and challenge him, you know, to take that next step. And so that’s why I’m just so excited and feel really, really great about this situation.

I think you’re getting a relentless individual, an individual that demands more from himself than anybody else could ever could. And I think he’s an individual that is not going to stop until he achieves what he wants to achieve. When he puts his mind to it, he’s unstoppable, and I think you’re gonna get a resilient individual, an individual that has the ability to bounce back from adversity quickly. And he’s shown that and he’s proven that. I’m just excited, he’s a very passionate individual that loves what he does and loves to have fun, and is a guy that works. He’s probably the most driven person I’ve ever been around. He got clarity, he honed in on what he wanted to achieve, and he went to work. That’s the exciting thing for me, is to watch him continue on this road that he’s had, because he has had to overcome a lot. I think he has no ceiling. I really do believe that you’re gonna get a guy that is hungry, for sure.