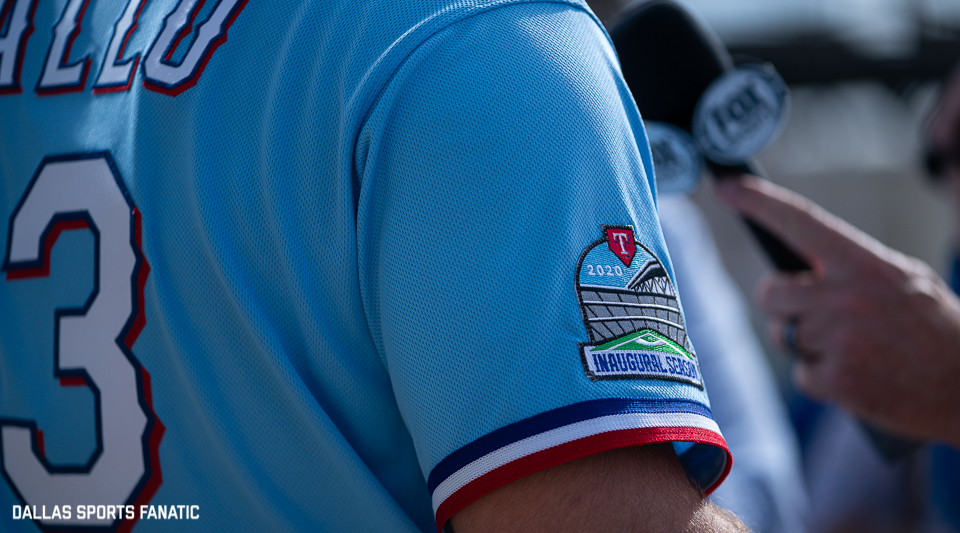 Piecing together the possible sponsor patches for Rangers uniforms in 2020

Piecing together the possible sponsor patches for Rangers uniforms in 2020

Amid negotiation (or whatever league and MLBPA are doing right now), the players association added a piece to the proposal. According to Ken Rosenthal of The Athletic, the union will allow teams to sell advertisements and patches on club uniforms. This aspect will help with the surging financial blow of the 2020 season. It brought up a curious question on what patches the Rangers would implement for the 2020 campaign. The Rangers have numerous sponsors throughout Globe Life Field, including promotions, advertisements scattered around the park, and theme nights (that the club nixed for this year due to obvious reasons). Let’s look into the crystal ball and see what options the club can use for the 2020 season.

On union proposal to allow clubs to sell advertisements/patches on uniforms: Traditionalists would hate it, but pandemic created exceptional financial circumstances and such ads would be an easy way to make money. Nike swoosh already was set to adorn all uniforms in 2020.

I’m assuming the Rangers will keep their Globe Life Field inaugural patch like they showed off in December. While the crowd will be non-existent, the club expects to play at Globe Life Field for their first home game. However, Globe Life remains the main sponsor of the Rangers. Therefore, I wouldn’t show any shock to see another Globe Life advertisement patch on the Rangers’ uniforms.

Whataburger is a sanctuary in North Texas. It’s the number one fast-food burger joint Texans think of — regardless of if you love it or hate it. Whataburger was also a sponsor for a couple of promotions the Rangers were going to give out in 2020, plus a Whataburger theme night was in the works (July 1st). I’m hoping that the Angels add an In-N-Out patch on their jerseys so fans can witness a literal head-to-head between Whataburger and In-N-Out, something we ALL want.

I’m not sure if every team will have at least one charity patch on their uniform (or if there any rule stipulations that prevent this), but the leading charity the Rangers promote is the Texas Rangers Baseball Foundation. The foundation strives to improve the lives of the Rangers’ community aiming at children, military, and first responders and their families. You can learn more about the foundation here.

This option will sting some people. Of course, Rangers’ fans know the result of Nolan Ryan’s reign with the Rangers (from a business side) and how things went in Houston with the Astros. Nolan Ryan Beef may lose a decent profit if ticket sales decrease. Nolan Ryan Beef is the Rangers’ hot dog brand serving tons and tons of dogs per game. Since basically no fans are likely to attend, hot dog sales go down. Don’t show any shock if you see a Nolan Ryan Beef patch on the Rangers’ jersey; I know I won’t.

And the Rangers make an announcement that Nolan Ryan beef will supply the official hot dog at Globe Life Field next year. No kidding.

This patch probably won’t be a requirement by Major League Baseball, but don’t be surprised to see a “BLM” patch on all thirty teams uniforms for 2020. Nearly every professional organization promoted the movement at some point within the last three weeks. Honestly, I wouldn’t show any surprise if the NBA, NHL, and NFL teams add a patch or marking on their headgear, jersey, or shoes.

Major League Baseball has always given a small leeway for personalized gear. For example, bats, gloves, and how players wear their socks. Of course, the league will mandate each patch and likely regulate the jerseys as only advertisements (different than Players’ Weekend). While the fans groan at the idea, I think it’s an experiment for future use. Honestly, if there’s any experimentation going on, 2020 is the year to do it. Now there needs to be an actual season to experiment.

If the patches look like @NBA patches and not dominate the uniform as they do in soccer/@WNBA it makes complete sense https://t.co/NYopSmV1qZ