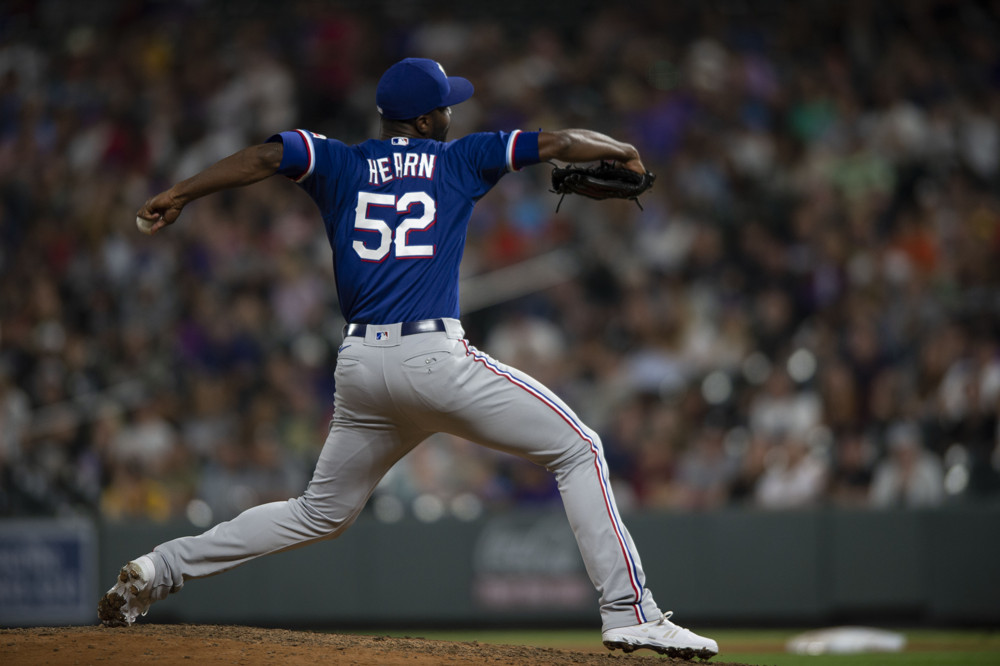 The Rangers are on their way to their fifth consecutive losing season. With losing seasons, you often have a number of veterans dealt at the trade deadline and if they’re not absolute superstars being moved, teams likely have to make their pick of a few iffy prospects to try to develop into eventual contributors. Over the last five seasons, the Rangers have dealt plenty of key veteran players and they’re finally starting to see some dividends from their past deadline deals with several prospects acquired in recent years making an impact at the major league level.

On Sunday afternoon, the Rangers blasted the Houston Astros 13-2 in a game that was started by Taylor Hearn. The Royse City native went 6.2 innings allowing just 2 runs against a stacked Astros lineup. It was the first career quality start for the 27-year-old who came over to the Rangers in 2018 (along with Sherten Apostel) in a deal with the Pittsburgh Pirates for fiery reliever Keone Kela. Hearn has been one of Texas’ best players since the All-Star break with a 2.83 ERA and 1.00 WHIP in 35 innings over the last six weeks.

On Saturday night, the Rangers sent Kolby Allard to the bump against the Astros. While it admittedly wasn’t a great start, Allard has been a major workhorse in the rotation for manager Chris Woodward in 2021. After working out of the bullpen until the end of May, the 24-year-old lefty has now pitched more innings (106) than any other Rangers pitcher not named Kyle Gibson, Jordan Lyles or Mike Foltynewicz in 2021. While Allard has been prone to the occasional beaning that will bloat his ERA, he does have six quality starts this season and 13 of his 16 starts have been at least five innings of work. Allard was the lone piece the Rangers got back in a trade for relief pitcher Chris Martin at the deadline in 2019. While he still has plenty to work on, he has definitely shown he has the stuff to be a back of the rotation-type piece and possibly more.

On Friday night, the Rangers utilized one of the four prospects they received in last month’s Joey Gallo trade with the New York Yankees. RHP Glenn Otto made his major league debut against the Astros and struck out seven over five shutout innings. It was a dominant first outing for the Spring, Texas native and a great sign for the value of the return in the Gallo trade considering most pinned Otto to likely be the third best out of the four prospects that were coming back to Texas in the deal. The other three (Ezequiel Duran, Trevor Hauver and Josh Smith) are all likely a year or more away from the major leagues.

On Monday, the Rangers will send a prospect acquired in a deadline deal to the mound for the fourth consecutive night. 23-year-old A.J. Alexy is set to be called up from AAA to make his major league debut in a start against the Colorado Rockies. Alexy was one of the three players the Rangers got back from the Los Angeles Dodgers for Yu Darvish all the way back in July 2017. The other major piece was of course Willie Calhoun, who will hopefully be returning to the Rangers lineup sometime in September. Alexy has worked his way through the minor league system and certainly earned his opportunity to pitch the in the big leagues after being drafted by Los Angeles out of high school back in 2016.

There are more examples, but the Rangers deserve some credit for scouting out the right pieces to seek in these deadline deals and then developing them into pieces eventually worthy of coming up to the big leagues. It remains to be seen how many will stick, but it’s certainly worth noting that four consecutive games will be started by pitchers acquired over the last five trade deadlines.