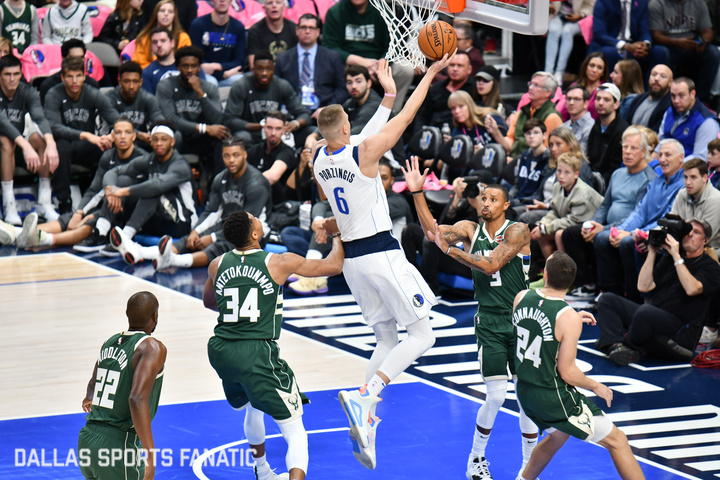 The Mavericks played their first home preseason game in front of the American Airlines Center faithful on Friday night in a matchup with the mighty Milwaukee Bucks.  Whether it was the return from injury for J.J. Barea, the home debut for Kristaps Porzingis, or just the excitement to see an organized Mavs basketball game back on the court in Dallas, there were plenty of points of interest.  The Bucks would ride the epic shoulders of the reigning league MVP, Giannis Antetokounmpo, to a 118-111 win on Friday night.

New era, new arena look
The American Airlines Center has had virtually the same in-seating bowl look ever since the Mavericks have started playing there back in 2001.  We had already seen glimpses of the new court throughout the preseason with the revealing of the different wood coloring, the Dallas skyline at center court, and of course the silhouette of the legendary Dirk Nowitzki’s signature one-legged fadeaway gracing both sides of the court.

In addition to the on-court appearance, the Mavs also have appeared to changed up their arena lighting.

Mavs have joined the theater lighting movement, I suppose. pic.twitter.com/Ooh4oGXlVJ

They have adopted the theatre-style lighting that originated at Madison Square Garden and the Staples Center but has slowly turned into a trend at arenas around the league.  It certainly all is a different look for a Mavs team that has trotted out the same thing for more or less the last two decades.

The return of J.J. Barea
Friday night marked the first time back on the NBA floor for fan favorite J.J. Barea since an Achilles injury back in January.  Nine months later, he returned to a very loud ovation from the Mavs fans who have been cheering him on since he made his NBA debut back in 2006.

“It’s special, man,” Barea said with a smile after the game when asked about his feelings towards the warm reception he got when checking in.  “There’s no better place to play than here in Dallas.  There’s no way for me to describe the way I feel about playing in this arena and about these fans.”

When asked about how far away a return from the Achilles injury might have felt back when the injury happened in January, Barea didn’t hesitate to be honest.

“Oh, I thought it was never going to happen, probably.”

Congrats on working your way back from such a tough injury, J.J..

Offense still looking to click
It’s hard to imagine an offense scoring 111 points on a given night and saying that it struggled.  However, the Mavericks regulars played long stretches of this game together and the team just looked lost at times.

Kristaps Porzingis has struggled with his shot in his first two preseason games and his stat line on Friday night is not one he’s likely proud of: 11 points, 5 rebounds on 4/13 overall shooting.  He shot just 2/9 from three and most of those shots were wide open attempts at the top of the arc.  If those shots can start falling at a higher rate, it’s easy to see just how lethal of an offensive weapon KP could be in a lineup with Luka Doncic as the defenders swarm inside the arc as Luka drives and that leaves Porzingis open for three.  Plus, his ability to score off the dribble has shown up multiple times in his first few games and it’s definitely a skill he should try to utilize more when his shot isn’t falling.

Beyond Porzingis and Doncic, it’s tough to tell who is going to be the next offensive option.  The second leading scorer on the team behind Doncic was big man Boban Marjanovic who was having a good time scoring against smaller defenders in the paint, but that’s not something Dallas should plan on utilizing on a regular basis.

Something that has been concerning in the first three preseason games is how little Delon Wright is being able to find himself being used in the offense as anything other than a corner three shooter.  That’s not what why Dallas signed him to a three year contract this summer. Whenever Doncic and Porzingis are on the floor together, Wright has seemed to have had very little chance to handle the ball.  Hopefully this is something they hammer our in practice with Wright always being on the same team as those two in scrimmages.

The Mavericks will play their next preseason game on Monday at the American Airlines Center against the Oklahoma City Thunder. Tip-off is scheduled for 7:30.